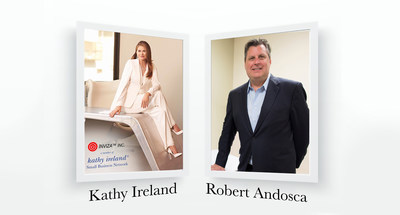 "We are delighted to welcome Dr. Andosca and his brilliant team to kiSBN," says Kathy Ireland,  Chair, CEO and Chief Designer of kathy ireland® Worldwide.  "INVIZA's technology is like no other.  It does not need an electrical power source to recharge, and therefore can transmit important and vital health data without interruption.  Now, more than ever, tracking our health and wellness is crucial for us and our loved ones, and INVIZA's technology makes it convenient and effortless," adds Ms. Ireland, who is named one of the top ten health advocates by UCLA.

Dr. Robert Andosca, INVIZA's Chief Executive Officer stated, "We are extremely excited to be teaming up with Kathy Ireland and the kathy ireland Worldwide team on branding INVIZA's wearable products. It is a tremendous boost to an early-stage startup company like INVIZA

This partnership fits well within kiWW's Advocacy for Health and Wellness initiative. Our self-powered, hidden InvizaWEAR products will produce non-disrupted flow of vital health data and predictive analytics since our wearables do not have the electrical power consumption constraints that competitor's wearable products do. Our InvizaWEAR products scavenge power from body heat, body movement and/or light while designed into clothing, shoes, or jewelry … there is no recharging of batteries needed!  So, people can focus on their health without having to think to recharge their wearable."

Mr. Donald Nohavec, INVIZA's Chief Strategy Officer and SVP, Product Development stated, "Our first InvizaWEAR products will measure footstep count, heartrate, blood oxygen % saturation (%O2) content, body temperature and much more. In addition, two other important health and fitness parameters not currently measured by other wearable trackers will be assessed, yet these will stay confidential for now." Donald continued, "The company's mission is to provide highly accurate health, fitness and location biometric data for the user to evaluate. Plus, you can wear it at any time, dressing up or down, because our products are 'invisible'."

Ms. Monica Restrepo, INVIZA's Chief Wellness Officer added, "On a personal note along with the INVIZA team I am eager to help people with their well-being more proactively. Providing the wearer proactive biometric data is much more useful for the person than standard healthcare practice, which is reactive in nature." Monica went on further to say, "As an example of predictive wellness analytics, during the current pandemic if both your body temperature increases to greater than 100.5 °F (38.1 °C) and your %O2 drops below 88%, then these together are strong indicators of being infected with the Coronavirus (or other potentially serious illness effecting your lungs). Our smartphone app would then alert you to seek a medical professional's attention to evaluate your specific health situation before it can get worse."

INVIZA plans to pre-announce the first in their InvizaWEAR product line at the commercialization of emerging technology conference COMS 2020 this fall, debut the product at CES 2021 in January and with market release mid-2021.

INVIZA Inc. was Founded in 2020 in the State of Texas, is headquartered in Austin, and is majority owned by women who are first-generation Americans. The Company's mission is to provide the world's best wearable technology, which recharges itself from heat, movement or light while obscured from view within apparel, shoes, and accessories, and provides biometric data analytics to the wearer. The idea is to not only make the wearable technology concealed from others to "see" (sometimes hidden in plain view), but to make it so when the wearer puts their clothes on in the morning the flexible electronics, sensors, wireless communication (e.g. Bluetooth Low Energy "BLE"), power generation and power storage (e.g. high power density, long charge life, safe supercapacitors) come with them. Truly out-of-sight and out-of-mind … or InvizaBLE™.  INVIZA's products include environmentally friendly, consumable InvizaWEAR, smartphone apps, and Big Data analytics. INVIZA has one issued patent and more pending.

kathy ireland Worldwide (kiWW) is listed as one of the most powerful brands in the world by License Global Magazine. Furniture Today names Kathy Ireland herself as one of the most influential leaders in the home/ furniture industry. Kathy is named one of the 19 most influential women in licensing by License Global Magazine and according to Fairchild Publications, Kathy is one of the 50 most influential people in fashion as well. kiWW is the recipient of multiple awards including several Good Housekeeping Seals and responsible for $Billions in global retail sales. As a result, Kathy Ireland has graced the cover of Forbes Magazine two times, once in 2012 and then again in 2016.

Kathy and kiWW support many non-profits including the YWCA Greater Los Angeles for which she is an Ambassador, the Dream Foundation, the Providence Educational Foundation, the 9-1-1 For Kids, the St. Jude Children's Research Hospital, and Kathy is named an Ambassador for the Elizabeth Taylor AIDS Foundation. To encourage equality in women's athletics, Ireland has hosted several LPGA Golf Tournaments, including the Kathy Ireland Championship from 1999 to 2001 and the Kathy Ireland Greens.com LPGA Classic in 2000. In 2019, Kathy was added as the first woman to the board of the NFL Players Association and joined the Women's National Basketball Players Association (WNBPA) Board of Advocates that same year. In 2020, Kathy Ireland joined the National Pediatric Cancer Foundation as International Youth Chair.

As part of kiWW's Advocacy for Health and Wellness and Commitment for Innovation the company developed the kathy ireland Small Business Network (kiSBN) in 2020. In February 2020, kiWW partnered with Stellus Technologies which takes a unique, modern approach to solving unstructured data challenges. The Stellus Data Platform is a software-as-a-service (SaaS) based Big Data system that leverages Cloud, Core and Edge infrastructures to enable hyperscale throughput for digital enterprises. In May 2020, kiWW partnered with Vertical Wellness, a leading multi-national vertically integrated health and wellness company with a focus on natural Hemp cannabinoid (CBD) solutions.