LOUISVILLE, Ky., Sept. 5, 2019 /PRNewswire/ -- Football fans will get a Kentucky Fried treat today as KFC® reveals its latest ad campaign and its newest celebrity Colonel Sanders—Colonel Rudy, played by Sean Astin, who's famously known for his leading role in the 1993 classic sports film Rudy. Colonel Rudy will make his national game-time debut in KFC's most unexpected TV commercials yet beginning September 5, just in time to kick off Thursday Night Football. 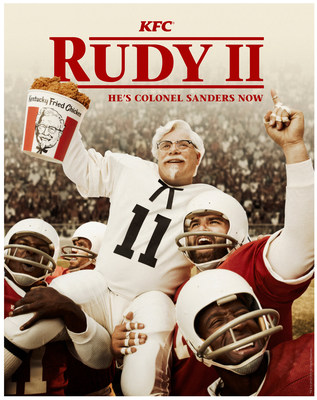 Both Colonel Sanders and Rudy Ruettiger have similar stories of fulfilling their dreams by doing things the hard way and never giving up. In KFC's new campaign, Rudy II, fans will see Rudy on a quest to fulfill a new dream – to become the Colonel Sanders. The spot recreates several of the iconic scenes from the original Rudy film like the famous locker room speech and when Rudy is lifted up and carried off the field as a hero, but in a unique way that only KFC could do.

"Football, Kentucky Fried Chicken and the iconic sports film Rudy – three American classics that were made for each other," said Andrea Zahumensky, KFC U.S. chief marketing officer. "This is why we've enlisted Colonel Rudy to remind fans across America that there's no better way to watch your favorite team than with a bucket of the Colonel's famous fried chicken."

Colonel Rudy will also introduce KFC's latest finger lickin' deal – beginning September 9, for a limited time only, fans can get a free chocolate cake when purchasing a 10-piece meal at participating KFC restaurants. KFC's decadent chocolate cake drizzled with vanilla icing is the perfect way to complete a gameday (or any day!) meal for family and friends.

"When KFC approached me to reprise the role of Rudy, but play him as Colonel Sanders, I knew this was something I couldn't pass up," said Sean Astin. "Getting to recreate some of the film's iconic scenes with a KFC spin was such a fun experience. Now I'm ready for some football and a bucket of KFC's Original Recipe® fried chicken!"

Rudy II is one of four unique Rudy KFC advertising spots that will air September 5 through November. And, if you watch closely, you might even catch a cameo by the real Rudy Ruettiger.

KFC's Original Recipe® bucket of fried chicken is an ideal meal for groups – especially when it's gameday and you want to ensure you're on the winning side. If you're watching the game solo, pick up a KFC $5 Fill Up. You can choose from KFC's famous fried chicken, new Mac & Cheese Bowls, Famous Bowls and Pot Pies. KFC $5 Fill Ups are a filling, affordable and convenient meal option everyone can enjoy during football season and beyond.