LOUISVILLE, Ky., May 23, 2018 /PRNewswire/ -- To kick off Memorial Day weekend a little early and celebrate summer, KFC today opened a sweepstakes to enter for a chance to win the summer's must-have pool float: the limited-edition KFC Colonel floatie. In the likeness of Colonel Sanders and in the shape of a ridable raft, the KFC Colonel floatie features special holders for a bucket of Kentucky Fried Chicken® and your favorite beverage. 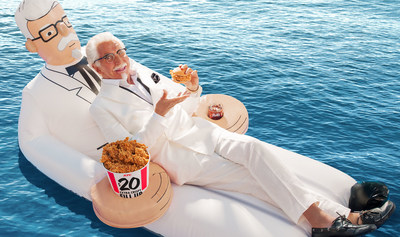 Like the recently-introduced Crispy Colonel, the KFC Colonel floatie is perfect for the on-the-go, summer lifestyle. More than three million lucky customers have already enjoyed KFC's Crispy Colonel sandwich. Now hundreds of them will have the chance to enjoy their new favorite chicken sandwich (or a bucket of chicken) while floating in their favorite body of water, atop their favorite KFC Colonel-shaped floatie.

"We want this to be the best summer ever, so it wasn't enough for us to bring back George Hamilton as the Extra Crispy Colonel and debut a superior, craveable fried chicken sandwich that stands above the rest," said Andrea Zahumensky, KFC U.S. CMO. "We wanted to create the perfect vessel for enjoying the Crispy Colonel sandwich (or a bucket of Kentucky Fried Chicken). Enter the KFC Colonel floatie."

From swans and flamingos to pizza slices and donuts, pool floats have become the perfect toys for summer. A must-have for your social media selfies this season, bring the KFC Colonel floatie to your favorite water destination and watch as your friends drool with envy (and hunger).

"We saw that the over-the-top pool float trend was taking over social media and thought it would fit perfectly with our notorious Extra Crispy lifestyle campaign. Summer is about making fun memories, and what better way to do that than drifting on the water in the arms of the one and only Colonel Sanders," said Zahumensky.

Visit KFCfloatie.com starting today through June 22 to enter for a chance to win one of the limited-edition free floaties, which aren't being sold or made available outside of this giveaway. Winners will be selected on June 23, and floaties will ship to arrive in time for the 4th of July weekend for most recipients.

KFC is also partnering with Snapchat to create a World Lens that brings the Colonel to life in an augmented reality experience that enables users to live the Extra Crispy lifestyle with the help of their smartphone camera. Snapchatters can also enter to win a KFC Colonel floatie directly from the lens starting on Memorial Day, May 28.

The KFC Colonel floatie quietly debuted recently in an ad spot with famously tanned actor George Hamilton sitting atop the floatie as the Extra Crispy Colonel, to introduce KFC's new Crispy Colonel sandwich. The Crispy Colonel sandwich, a classic chicken filet, hand-breaded in KFC kitchens and made to order, is the perfect portable complement for floating on the water this summer.