SAN DIEGO, Jan. 29, 2018 /PRNewswire/ -- The American Institute of Architects (AIA) announced Klyde Warren Park, a freeway deck park in Dallas designed by OJB Landscape Architecture (OJB), as the recipient of the 2018 Collaborative Achievement Award. This award "recognizes and encourages distinguished achievements of allied professionals, clients, organizations, architect teams, knowledge communities, and others who have had a beneficial influence on or advanced the architectural profession." The park will be honored at the 2018 AIA Conference on Architecture in New York. 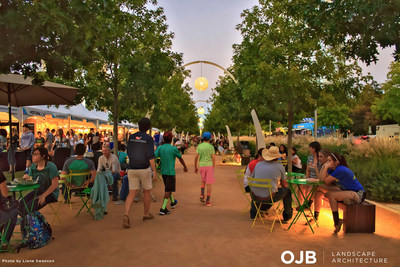 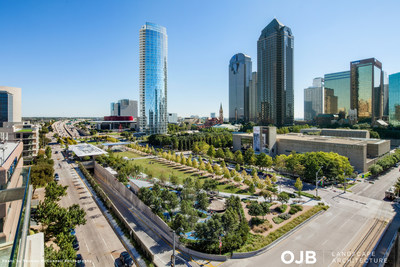 OJB Founder and President, James Burnett, FASLA, said, "We are honored to receive this prestigious award from the AIA. A project of this scale takes close collaboration with many groups. We teamed with great partners that shared our vision to knit downtown back together by way of this important park."

Klyde Warren Park is a 5.2-acre urban deck park constructed over the eight-lane Woodall Rodgers Freeway, one of the busiest freeways in Texas. For many years, the freeway severed the city's Arts District from Uptown, but since the park's opening in 2012, it has transformed the city by bridging that gap and creating a new heart of downtown.

Creating a world-class park required the collaboration and participation of many dedicated parties. Conceived as a Public/Private Partnership (P3), the park's construction was funded jointly by the City of Dallas, the Texas Department of Transportation (TxDOT), the US Department of Transportation and private donations to the non-profit Woodall Rodgers Park Foundation (WRPF). Design and engineering was carefully conceived to overcome the unique site challenges. The community engagement process allowed the citizens of Dallas to have a voice in the program, and was an important part of the park design.

Klyde Warren Park has become an integral and endeared open space in the fabric of Downtown Dallas.

About OJBFounded in 1989, OJB Landscape Architecture began with a focus on creating landscapes that provide unique and unforgettable sensory experiences. OJB's recent work has focused on the rejuvenation of American cities through the creation of distinctive public park spaces including ULI Urban Open Space Award winner Klyde Warren Park in Dallas and Myriad Gardens in Oklahoma City. Other notable projects include the artfully planted Sunnylands Center and Gardens in Rancho Mirage, CA, Levy Park in Houston and LeBauer Park in Greensboro.  In 2016, James Burnett, FASLA, founder of OJB Landscape Architecture, received the ASLA Design Medal and in 2015, OJB received the ASLA Firm Award for its portfolio of work. Follow OJB on Facebook, Instagram, Twitter and Vimeo.