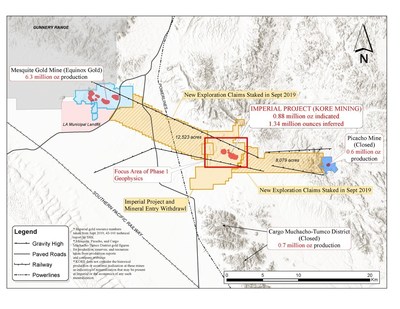 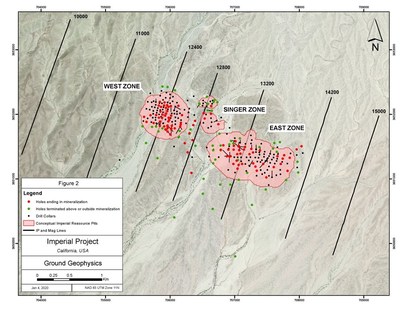 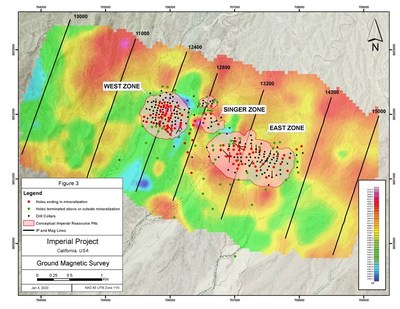 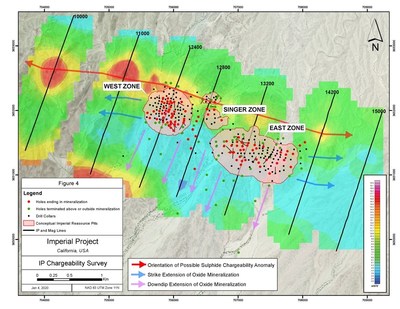 Scott Trebilcock, President and CEO of KORE, stated, "While the purpose of the ground geophysics was to define deposit signatures for regional exploration, we were pleased by the strong alignment to the known resource and the revealing of undrilled resource expansion targets."  Mr. Trebilcock continued, "We are immediately commencing additional work on both resource expansion and regional exploration."

KORE COO, Marc Leduc commented, "The large chargeability high under Imperial was unexpected and opens up a whole new scale of opportunity for the Imperial deposit.  One potential interpretation is that the anomaly is the sulphide roots of the current oxide deposit.   Several large Nevada deposits, including Goldstrike, also started as small, oxide mines."

KORE staked the Mesquite-Picacho district ("District") in September 2019, controlling 26,323 acres over a 28 kilometer trend.   The three District deposits (Mesquite-Imperial-Picacho) were discovered in exposed outcrops and from placer workings.  The rest of the District is covered by alluvium and has never been systematically explored.  Having the intact Imperial deposit to "tune" or "fingerprint" geophysical signatures, greatly enhances the ability to explore under the alluvium and potentially make new discoveries along the trend. Figure 1 in the maps and sections linked to this news release shows the Imperial deposit in relation to the rest of the District.

In Q4 2019, the KORE exploration team built an electronic exploration database of drill collars, lithology, and grade intervals and executed a 12-day ground geophysical survey over the known Imperial deposit and along strike.  The programs generated resource expansion drill targets and "tuned" ground geophysics to commence exploration of the new Mesquite-Picacho claims staked in September 2019.

The Q4 2019 ground geophysics combined with past drilling, highlighted several areas for potential expansion of the current resource: down-dip from West, East, and Singer zones and between East and West zones (Expanded Singer).  Historic drilling was either terminated before anomalies or the down-dip and strike extension areas were not drilled.  The conceptual targets are described as arrows on Figure 3.

The ground geophysics also highlighted a new large open-ended chargeability anomaly under current mineralization which extends along-strike 1.5 kilometers west and 1 kilometer east.   The anomaly can be seen clearly in Figure 5.   The anomaly increases in intensity to the west.  No historic drilling penetrated into this anomaly as there is a conglomerate unit underlying the deposit in which drilling was terminated.

A full set of high-resolution Figures including sections of all seven ground geophysics lines are available on KORE's website here (or copy and paste this into your browser: https://www.koremining.com/s/nr20200107-supplement-imperial-geophysics-exploration-update-final.pdf).

Imperial is a structurally controlled intermediate epithermal gold deposit. The oxide gold deposit is currently defined at 2.44 kilometer long and up to 0.75 kilometer wide and is open both along strike and downdip. It is hosted in a shallowly southwest dipping, amphibolite grade metamorphic rock suite along a west-northwest trending low-angle regional thrust fault system. The thrust fault system controls the regional geometry of mineralization. East-west striking, post-mineralization normal faults control the property scale geometry of mineralization. Geophysical characterization of the deposit and regional controlling structures is an essential component of exploration for additional resources.

The footprint of the current Imperial mineralization is about 500 acres, less than 2% of the 26,323 acre Mesquite-Picacho District controlled by KORE.

KORE is 100% owner of a portfolio of advanced gold exploration and development assets in California and British Columbia.  KORE is supported by strategic investors Eric Sprott and Macquarie Bank who, together with the management and Board own 66% of the basic shares outstanding.

Technical information with respect to Imperial deposit and project contained in this news release has been reviewed and approved by David S. Smith, CPG, who is KORE's designated independent qualified person for the purposes of this news release.

In addition to the above summary, additional risks and uncertainties are described in the "Risks" section of the Company's management discussion and analysis for the interim period ended September 30, 2019 prepared as of November 28, 2019 available under the Company's issuer profile on www.sedar.com.

A full set of high-resolution Figures including sections of all seven ground geophysics lines are available on KORE's website here (or copy and paste this into your browser: https://www.koremining.com/s/nr20200107-supplement-imperial-geophysics-exploration-update-final.pdf).