VANCOUVER, April 29, 2020 /PRNewswire/ - KORE Mining Ltd. (TSXV: KORE |OTCQB: KOREF) ("KORE" or the "Company") is pleased to announce results from its ground geophysics program on the Mesquite-Imperial-Picacho District exploration project ("District" or "Project").  Previously, KORE "tuned" the ground geophysics over its Imperial deposit and has now completed initial work using the "tuned" signatures to define exploration targets on the western half of the District exploration project.  The District covers 28 kilometer of total strike length from the operating Mesquite mine (Equinox Gold Corp. | TSX:EQX) to the closed Picacho mine and including KORE's Imperial project. 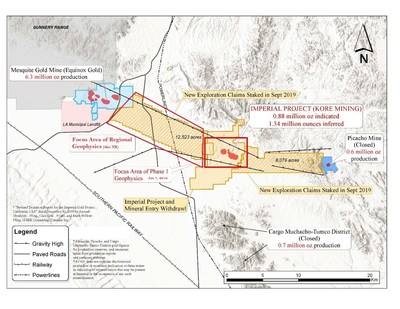 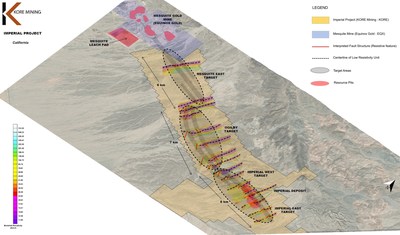 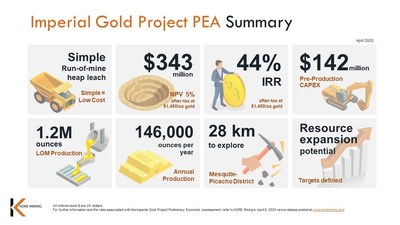 Click here to for a video walk-through of District exploration interpretation.

Figure 1 shows the Mesquite-Imperial-Picacho claim in relation to KORE's Imperial project, the operating Mesquite mine and the closed Picacho mine.  Figure 2 depicts the western half of the District (Mesquite-Imperial) with the three newly defined target areas with main interpreted target structures.

Scott Trebilcock, President and CEO of KORE, stated, "KORE's recent work is the first step in the exploration process to tap the vast potential of the Mesquite-Imperial-Picacho District."  Mr. Trebilcock continued, "Districts controlled by a single Company are rare in the hyper-competitive gold exploration world.  Unlocking the potential of the Mesquite-Imperial-Picacho District could extend Imperial County's long history of gold mining for many decades to come."

KORE owns 100% of the District which consists of 26,323 acres on 1,007 claims and captures the entire 28-kilometer trend.   In the District, gold is hosted in local fault structures related to a series of regional faults connecting the known District deposits.  Those three District deposits (Mesquite-Imperial-Picacho) were discovered in exposed outcrops and from placer workings.  The rest of the District is covered by alluvium and has never been systematically explored.  Having the intact Imperial deposit to "tune" or "fingerprint" geophysical signatures, greatly enhances the ability to explore and target deposits under the alluvium and make new discoveries along the trend.

Q1 2020 exploration utilized Induced Polarization ("IP") geophysics with 16 lines for a total of 45 line km's, including those announced in the January 7, 2020 news release. IP geophysics was the chosen method due to the success of the identified geophysical signature corresponding well with that of the intact Imperial gold deposit also announced January 7, 2020.  New ground geophysics lines consisted of 29.4 line kilometers of induced polarization. Figure 2 shows the location of the induced polarization and magnetic surveys.

The District, in addition to the large Mesquite-Imperial-Picacho deposits, has a long history of placer gold mining from surficial gravels. Several Mesquite group deposits and the Imperial deposit were discovered from following the gold in gravels to the underlying hard-rock gold mineralization.  Documented placer gold mining in the District goes as far back as the trans-continental railroad construction in the late 1800's but archeological evidence goes back into the Spanish colonial period.  Much of the District is covered in alluvium from the Colorado river valley and there is little to no outcrop.  Geophysics is the best way to target drilling under the gravels.

Mesquite East target is interpreted as multiple near vertical and parallel NW trending resistive fault structures on strike with the Vista and Rainbow pits of the adjacent Mesquite Mine. These resistive structures are coincident with regional folding and are flanked by locally high chargeability anomalies that could be indicative of remnant sulphide mineralization. The conceptual targets are highlighted in Figure 2.

The Ogilby Target area sits between the Mesquite East and Imperial West target areas.  The Ogilby Target, much like the Mesquite mine and the Imperial deposit, have historic placer gold mining from surficial gravels. The interpreted near vertical resistive structures (faults) appear to have good continuity through to both the Imperial deposit to the east and the Mesquite mine to the west. As with the Mesquite East target, the resistive structures appear to be flanked by higher chargeability zones, indicative of sulphides or partially oxidized sulphides. The conceptual targets are highlighted in Figure 2.

The Mesquite-Imperial-Picacho trend centers on KORE's Imperial project.  Imperial is a structurally controlled intermediate sulfidation epithermal gold deposit. The 100% oxide gold deposit is currently defined at 2.44 kilometer long and up to 0.75 kilometer wide and is open both along strike and downdip. It is hosted in a shallowly southwest dipping, amphibolite grade metamorphic rock suite along a west-northwest trending low-angle regional thrust fault system. The thrust fault system controls the regional geometry of mineralization. East-west striking, post-mineralization normal faults control the property scale geometry of mineralization. Geophysical characterization of the deposit and regional controlling structures is an essential component of exploration for additional resources.

KORE has granted stock options to its Chief Financial Officer and its Chief Operating Officer as part of the Company's long-term incentive plan exercisable into 800,000 common shares of KORE at $0.435 per share with a five year term. KORE has also retained Kin Communications to provide investor relations services to the Company for a term of twelve months and as part of their remuneration has granted Kin Communications 200,000 stock options exercisable at $0.435 per share with a five year term, vesting in stages pursuant to the requirements of the TSX Venture Exchange, in addition to a monthly fee of $7,500.  All options have been granted pursuant to the Company's stock option plan, and subject to compliance with all applicable laws and the rules (and approval) of the TSX Venture Exchange.

KORE is 100% owner of a portfolio of advanced gold exploration and development assets in California and British Columbia.  KORE is supported by strategic investors Eric Sprott and Macquarie Bank who, together with the management and Board own 66% of the basic shares outstanding.

Technical information with respect to the Imperial deposit and project contained in this news release has been reviewed and approved by Marc Leduc, P.Eng., who is KORE's designated qualified person under National Instrument 43-101 for the purposes of this news release.

Cautionary Statement Regarding Forward-Looking InformationThis news release contains forward-looking statements relating to the future operations of the Company and other statements that are not historical facts. Forward-looking statements are often identified by terms such as "will", "may", "should", "anticipate", "expects", "intends", "indicates" and similar expressions. All statements other than statements of historical fact, included in this release, including, without limitation, statements regarding the future plans and objectives of the Company are forward-looking statements.  Forward-looking statements in this news release include, but are not limited to, statements with respect to: the potential gold structures at the District deposits, next steps and timing regarding follow-up programs at the District, results of the PEA, including future Project opportunities, future operating and capital costs, closure costs,  AISC, the projected NPV, IRR, timelines, permit timelines, and the ability to obtain the requisite permits, economics and associated returns of the Imperial Project, the technical viability of the Imperial Project, the market and future price of and demand for gold, the environmental impact of the Imperial Project, and the ongoing ability to work cooperatively with stakeholders, including the local levels of government. Such forward-looking statements, and any assumptions upon which they are based, are made in good faith and reflect our current judgment regarding the direction of our business. Management believes that these assumptions are reasonable. Forward looking information involves known and unknown risks, uncertainties and other factors which may cause the actual results, performance or achievements of the Company to be materially different from any future results, performance or achievements expressed or implied by the forward-looking information.

In addition to the above summary, additional risks and uncertainties are described in the "Risks" section of the Company's management discussion and analysis for the year ended December 31, 2019 prepared as of April 27, 2020 available under the Company's issuer profile on www.sedar.com.

Cautionary Note Regarding Mineral Resource Estimates: Information regarding mineral resource estimates has been prepared in accordance with the requirements of Canadian securities laws, which differ from the requirements of United States Securities and Exchange Commission ("SEC") Industry Guide 7. In October 2018, the SEC approved final rules requiring comprehensive and detailed disclosure requirements for issuers with material mining operations. The provisions in Industry Guide 7 and Item 102 of Regulation S-K, have been replaced with a new subpart 1300 of Regulation S-K under the United States Securities Act and will become mandatory for SEC registrants after January 1, 2021. The changes adopted are intended to align the SEC's disclosure requirements more closely with global standards as embodied by the Committee for Mineral Reserves International Reporting Standards (CRIRSCO), including Canada's NI 43-101 and CIM Definition Standards. Under the new SEC rules, SEC registrants will be permitted to disclose "mineral resources" even though they reflect a lower level of certainty than mineral reserves. Additionally, under the New Rules, mineral resources must be classified as "measured", "indicated", or "inferred", terms which are defined in and required to be disclosed by NI 43-101 for Canadian issuers and are not recognized under SEC Industry Guide 7.  An "Inferred Mineral Resource" has a lower level of confidence than that applying to an "Indicated Mineral Resource" and must not be converted to a Mineral Reserve. It is reasonably expected that the majority of "Inferred Mineral Resources" could be upgraded to "Indicated Mineral Resources" with continued exploration. Accordingly, the mineral resource estimates and related information may not be comparable to similar information made public by United States companies subject to the reporting and disclosure requirements under the United States federal laws and the rules and regulations thereunder, including SEC Industry Guide 7