LAS VEGAS, Sept. 16, 2019 /PRNewswire/ -- As the 2019 Triple-A baseball regular season comes to a close, The Howard Hughes Corporation® (NYSE: HHC) celebrates Las Vegas Ballpark® being named "Ballpark of the Year" and its professional Triple-A baseball team of the Pacific Coast League (PCL), the Las Vegas Aviators®, being named "Team of the Year", both by Ballpark Digest, the industry reference. This is the first time Ballpark Digest has awarded both a stadium and its affiliated team with top honors during the same year—the latest recognition during a record-setting inaugural season that has redefined sports and entertainment for Downtown Summerlin® and the greater Las Vegas Valley as the team and dedicated fanbase celebrated the franchise's first PCL Division title since 2014. 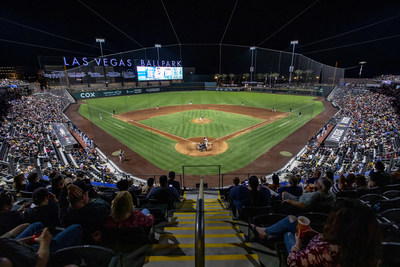 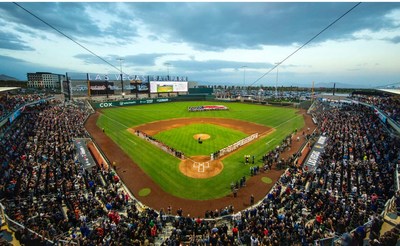 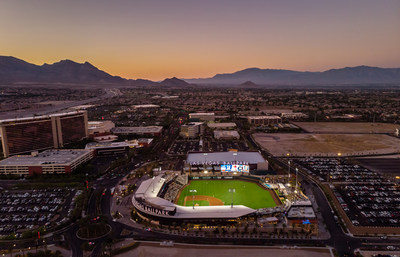 Capturing national attention within the world of Minor League Baseball, both the Las Vegas Ballpark and the Las Vegas Aviators are wholly owned by The Howard Hughes Corporation. Together, they have helped Downtown Summerlin solidify its popularity as one of the region's premier dining, retail, entertainment and sports destinations.

According to David R. Weinreb, CEO of The Howard Hughes Corporation, the company's development of the Las Vegas Ballpark exemplifies HHC's approach to creating vibrant destinations. "Across our portfolio, we weave masterful design and the creation of culture into the fabric of our planned cities, making them some of the most attractive places to live in the country. In Downtown Summerlin, we recognized the opportunity to create an urban core and brought the only professional baseball team in the region as a catalyst for downtown growth and community development within Summerlin. With our remaining land being among the best in the city, we could not be more pleased with the impact our downtown continues to have on Summerlin as we enter the next phase of its development."

The Las Vegas Ballpark is a state-of-the-art minor league stadium designed to offer an outstanding experience, complete with the largest video board in minor league baseball and a culinary program with takeovers by celebrity chefs, including Giada De Laurentiis. With a capacity of more than 10,000, the Ballpark features a wide range of seating options including 22 suites, club seats, berm seating, kids' zone, bars, party zones and decks, as well as a pool beyond the outfield wall where one can watch the game while floating. With average attendance of nearly 9,300 visitors, the Las Vegas Aviators led all of Triple-A baseball in home attendance with 47 sold-out games. The Las Vegas Ballpark has become a leading attraction in the region.

Summerlin® represents an integrated community, featuring a dynamic urbanism that has come to define The Howard Hughes Corporation's development of planned cities across its portfolio. With 6,000 gross acres remaining for future development—including 150 acres remaining for development in Downtown Summerlin—Summerlin represents a tremendous growth opportunity for the company. Upon full build out, Summerlin's population will double from approximately 100,000 today to over 200,000.

"As the best place in Southern Nevada to live, raise a family, work and play, Summerlin continues to add to its unmatched amenity base," said Kevin T. Orrock, President of Summerlin, The Howard Hughes Corporation. "As the recognition and enthusiasm for the Las Vegas Aviators and the Las Vegas Ballpark continue to grow, Downtown Summerlin has become a place where families and friends come to gather and enjoy America's national pastime in a one-of-a-kind environment."

About Las Vegas Ballpark® Las Vegas Ballpark, located on eight acres in Downtown Summerlin® just south of City National Arena—practice facility for the Vegas Golden Knights—is the home of the Las Vegas Aviators®, the city's professional Triple-A baseball team of the Pacific Coast League (PCL) and affiliate of the Oakland Athletics. In the 2019 inaugural season, the Ballpark gained national recognition, including top honors from  Ballpark Digest as "Ballpark of the Year." Las Vegas Ballpark provides a wide range of seating options including 22 suites, club seats, berm seating, party zones and decks, picnic tables, kids' zone, bars and a pool beyond the outfield wall. Designed to accommodate a variety of civic and community events in addition to baseball, Las Vegas Ballpark is easily accessed from all regions of the valley via the 215 Beltway.

Safe Harbor Statement Statements made in this press release that are not historical facts, including statements accompanied by words such as "will," "believe," "expect," "enables," "realize", "plan," "intend," "assume," "transform" and other words of similar expression, are forward-looking statements within the meaning of the Private Securities Litigation Reform Act of 1995. These statements are based on management's expectations, estimates, assumptions, and projections as of the date of this release and are not guarantees of future performance. Actual results may differ materially from those expressed or implied in these statements. Factors that could cause actual results to differ materially are set forth as risk factors in The Howard Hughes Corporation's filings with the Securities and Exchange Commission, including its Quarterly and Annual Reports. The Howard Hughes Corporation cautions you not to place undue reliance on the forward-looking statements contained in this release. The Howard Hughes Corporation does not undertake any obligation to publicly update or revise any forward-looking statements to reflect future events, information or circumstances that arise after the date of this release.

THE HOWARD HUGHES CORPORATION® ANNOUNCES DATES AND TIMES FOR...