HONOLULU, May 25, 2018 /PRNewswire/ -- In the most recent and largest poll of likely registered Democrat voters, Congresswoman Colleen Hanabusa holds a commanding lead over incumbent David Ige. 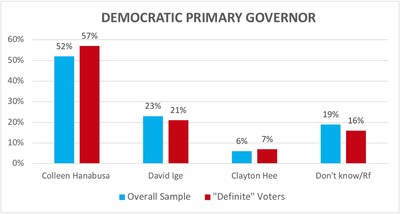 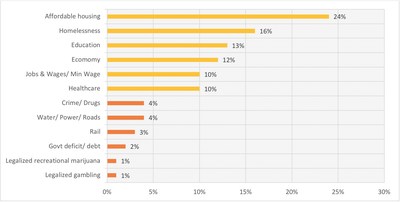 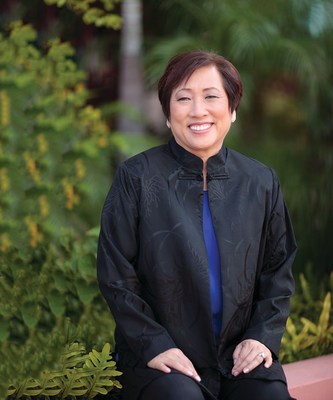 The poll was conducted by Qmark Research of Honolulu from April 21 to May 7, 2018. It included registered voters with a history and likelihood of voting in the 2018 Democratic Primary Election to be held on August 11, 2018. It should be noted that the study period of this survey began after the Ige campaign had begun its TV advertising and was completed before the Hanabusa campaign TV advertising was launched.

The margin of error for a total sample of this size (n=888) is +/- 3.36 percentage points with a 95% confidence level. To date, this is the largest Democratic Primary sample size and lowest margin of error in a poll this election cycle.

RACE FOR GOVERNORIn the poll, registered voters who indicated a likelihood of selecting the Democratic Ballot in the upcoming primary election were asked which of the top candidates for governor they would likely support if the election were held today. It showed Colleen Hanabusa holds a greater than 2:1 advantage over the incumbent David Ige, 52% to 23%.

Undecided/Don't Know voters comprised 19%. Even if David Ige could capture the entire undecided vote, he would still fall well short of closing the lead Hanabusa holds.

At just 6%, Clayton Hee is a relative non-factor in the race.

Hanabusa's lead over Ige is more pronounced on the Neighbor Islands where she holds a 36-point advantage over Ige. On Oahu, Hanabusa's lead is 27-points.

Looking only at those who say they will "definitely vote" in the primary, or who have a strong history of "always voting" in primary elections gives Hanabusa an even larger lead over Ige: 57% to 21%.

Among voters of Japanese ancestry, Hanabusa captured 60% of this important demographic segment compared to 18% for Ige. Among Caucasians, Hanabusa holds a 22-point lead over Ige, with an even wider gap among Native Hawaiians (33-point lead).

FAVORABILITY RATINGSAmong all of the candidates for governor tested, Colleen Hanabusa receives the highest favorability score (mean/ratio). Nearly two-thirds (64%) of potential voters polled currently have a favorable opinion of Hanabusa. Nineteen percent hold a negative view of her, while 14% have yet to form an opinion.

KEY CANDIDATE ATTRIBUTESRegistered voters were also queried on their reasons for choosing Hanabusa over Ige. When asked which candidate they associated most with each favorable attribute, they selected Hanabusa as the leader in every category:

ISSUES OF GREATEST VOTER CONCERNRegistered voters were asked about some of the largest campaign issues facing our community, and then ranked the ones of greatest importance to them.

Key findings of the most relevant issues included: