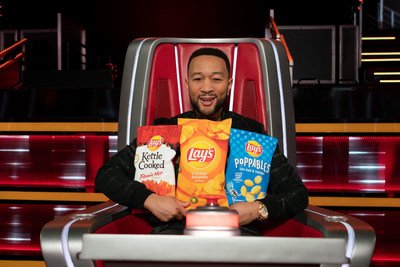 Together with John Legend, Lay's will be inviting fans to enter for a chance to win exclusive prizes – including a trip to see a live taping of "The Voice" in Los Angeles. Beginning March 2 through April 17, fans can visit www.LaysAndTheVoice.com to answer a weekly trivia question pertaining to each week's episode of "The Voice", enter an on-pack code from participating bags of Lay's, and learn about more ways to enter for a chance to win.

"I'm excited to partner with Lay's to launch these fun new flavors and to give the wonderful fans of 'The Voice' the opportunity to come share in the fun of the live show!" said Legend.

All the newest Lay's flavors are on shelves nationwide:

Season 18 of NBC's "The Voice" premieres on Monday, Feb. 24 (8:00-10:00pm ET/PT on NBC). For more information on Lay's newest flavors and how fans can enter to win exclusive prizes from Lay's and the hit show, visit www.LaysAndTheVoice.com.

About Lay's Lay's is one of the brands that makes up Frito-Lay North America, the $15 billion convenient foods division of PepsiCo, Inc. (Nasdaq: PEP), which is headquartered in Purchase, NY. Learn more about Frito-Lay at the corporate website, http://www.fritolay.com/, the Snack Chat blog, http://www.snacks.com/ and on Twitter http://www.twitter.com/fritolay. Learn more about Lay's by visiting www.facebook.com/lays or on Twitter at www.twitter.com/lays. You can also follow Lay's on Instagram by visiting http://instagram.com/lays.

Guiding PepsiCo is our vision to Be the Global Leader in Convenient Foods and Beverages by Winning with Purpose. "Winning with Purpose" reflects our ambition to win sustainably in the marketplace and embed purpose into all aspects of the business.  For more information, visit www.pepsico.com

NBC has earned more Emmy Awards than any network in television history.

Ruffles® Heats Up the Summer with Ultra-Exclusive Sneaker...

TOSTITOS® TEAMS UP WITH DAN LEVY TO ENSURE FANS DON'T MISS THE...