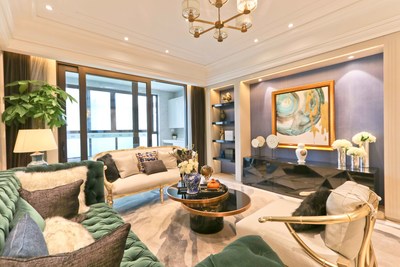 Based on the Chinese government's "One Belt One Road" initiative to build trade routes between China and the rest of Eurasia, a "supply-side reform" has started in China. The real estate sector which has served as an economic driver during the last few years has continued to expand in the country's first-tier cities where the market remains promising. The 212,000-square-kilometer Yangtze River Delta, home to a population of 150 million and where Nanjing is located, has been on the frontline of China's continued opening-up policy over the past several decades and is in the process of forming one of the largest world-class city clusters whose economic output has exceeded that of the whole of India. The area is expected to become one of the most desired working and living spaces in China, as a result of the impact of both the "One Belt One Road" initiative and the "Yangtze River Economic Belt", another Chinese government development initiative. Nanjing is considered to be the only megacity in the region as per the Yangtze River Delta City Cluster Planning report published by the Chinese government on June 1, 2016 and has been designated as a National Central City (the Chinese government's definition for a group of cities in charge of leading, developing, and performing tasks in political, economic, and cultural aspects) in the State Council's Reply to the Overall Planning of Nanjing City (2011-2020)" published on July 12th of the same year. The strategic importance of Nanjing is clearly showing itself in the new landscape.

Before the Grand Mansion project was rolled out, the city of Nanjing was already in the middle of launching its own plan: to build out the Hexi CBD as a second Shanghai Lujiazui financial center in the Yangtze River Delta. To date, more than 300 financial facilities and upwards of 4,000 companies, many of which are members of the Global Fortune 500 and the China Fortune 500, have chosen the Hexi CBD as the location for one of their Chinese offices. The arrival of such a great number of prestigious companies has caused an immense, uninterrupted run-up in the area's residential housing prices over the course of the past 19 months.

Yingtian Street, Nanjing's most important east-west thoroughfare crossing the Yangtze River, passes right through the CBD. The street is ideally situated in terms of access to transportation and to urban resources, among them, an 11-km long riverside park, the Nanjing Olympics Sports Center, a national first class library with a collection of 2 million books, Nanjing's metro system as well as several well-known educational institutions and medical facilities. The Hexi area has not only become a financial center, but also a cultural center and gathering point for the city's literati.

Poly Real Estate, with a portfolio encompassing more than 200 projects, is one of the first developers to enter Hexi CBD. In Nanjing, Poly Real Estate manages close to 19,000 condominiums and was the top sale performer in the city's real estate market from 2010 to 2016. One of Hexi's landmarks, the Nanjing Poly Grand Theater, designed by 2004 Pritzker Architecture Prize winner Dame Zaha Mohammad Hadid, was completed in 2014. The development team behind the Grand Mansion project consulted with the architects and designers of major urban projects in international metropolises including New York and London and built the residence in full adherence to international luxury housing standards: the landscape planning for New York's Central Park was a key reference. The mineral content that went into the construction materials was selected among the best available from several countries including Egypt, Italy, Germany and Turkey and the building exterior is notable for the use of Karamori gold granite. The range of service equipment available to the property management organization all come from leading manufacturers across 7 countries to assure an end-to-send suite of services delivering the highest level of convenience to residents and condominium owners. Poly brought in renowned Asian designer T.K. Chu who has designed 5 unique apartment layouts as well as an innovative and modern art-deco style club, furnishing Nanjing's wealthier residents with quality of life standards consistent with a high-end international community in the form of four-room apartments with a southern exposure. Hexi CBD will bring to Nanjing a new blueprint for a meaningful and quality lifestyle.

The new investment trend for Chinese with the means

Nine neighborhoods across China are known for where the country's wealthiest residents are housed, seven of which are split between Beijing and Shanghai, while one is located in Shenzhen, adjacent to Hong Kong in southern China, and, as the latest entrant, Hexi CBD in Nanjing. The development of these nine areas is due in large measure to the preference among the wealthy to choose an area where the action is, that being in China's leading capital cities. They invested early, and, by doing so, set off the trend the culminated in today's high real estate valuations across the area. Despite the ongoing instability in the world economy, the urbanization of China, a country which makes up one third of world economic growth rate, has entered into the second half of the timeline to finalization. The completion of Beijing and Shanghai as mega-metropolises is no longer enough to satisfy the needs of a population of 1.3 billion. Nanjing, with its location in the center of the Yangtze River Delta, was the next natural epicenter for the country's real estate market, following in the heels of the growth path for Beijing and Shanghai just a few years ago. People of means are constantly seeking safer forms of investment. The completion of many high-end housing projects in Hexi CBD and the immediate surrounding area has become a lead story for many articles in the Chinese media. Nanjing's municipal government has, multiple times, set a limit to the price of a piece of land in the city's many land auctions. Caught between the city government's efforts to rein in the speculation and the forces of the market, investors had to look high and low for an opportunity. The entry of Poly's Grand Mansion luxury residence has provided them with a new choice.