MIAMI, May 25, 2017 /PRNewswire-USNewswire/ -- Whitman Family Development today announced that Stanley F. Whitman, the visionary real estate developer and founder of Bal Harbour Shops, one of the world's top-producing luxury shopping centers, has died at age 98. According to the Whitman family, he died peacefully of natural causes at his Miami Shores home on May 24, 2017, just one week after a long-planned $400-million expansion of Bal Harbour Shops was approved by the local council. 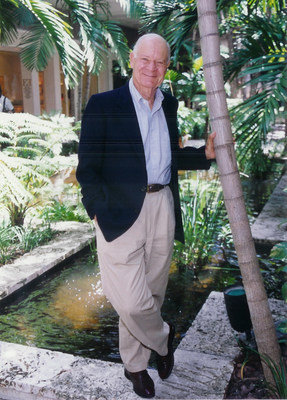 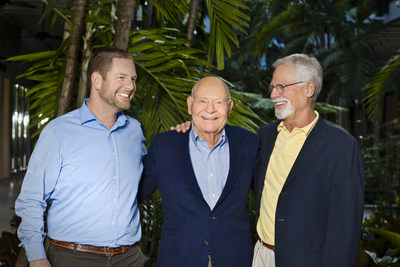 Born in Evanston, Illinois (just outside of Chicago) on November 15, 1918, four days after the end of World War I, Whitman spent the vast majority of his long life in, on, and around Greater Miami and the Beaches.  He grew up a member of a pioneering Miami Beach family along with his brothers, Bill and Dudley, in a single-family home on the ocean at 32nd Street and Collins Avenue, where the Faena Hotel stands today.  As a young boy, he attended Ida M. Fisher Elementary and his birthday parties typically featured rides on Miami Beach Developer Carl Fisher's famous elephant, Rosie.  Whitman would graduate in 1936 from Miami Beach High.

Whitman attended Duke University in Durham, North Carolina, where he was the president of his fraternity, Sigma Alpha Epsilon.  At Duke, he would meet the love of his life, New Jersey native Dottie Stivers.  From the very first moment he saw the beautiful May Queen to the last moment of her equally wonderful life, he was determined to love her beyond measure and theirs was a 66-year love affair that even the debilitating stroke she suffered late in her life could not dampen.

Following his graduation from Duke and with World War II in full swing, Whitman immediately joined the United States Navy's officer training school, where, 90 days later, he emerged an Ensign.  As a Naval officer, he would eventually command a fleet of submarine chasers off of the Atlantic seaboard and would also become a revered Naval instructor.  He was honorably discharged in 1945 as a Lieutenant Commander.

During his time at sea, Whitman and his beloved Dottie married and they gave birth to their two children, son Randy and daughter Gwen, in 1943 and 1947 respectively.  Whitman believed strongly in the enduring importance of families and his wife and his children meant the world to him.  He was a fierce competitor in all things and carried his dogged determination with him both into the office and onto the tennis court.  He never, ever, ever gave up.  A life-long weight lifter and exercise enthusiast, Whitman made up in strength and in heart the athletic finesse that, in fairness, his wife may have better exemplified.  But this made them a formidable doubles team.

In 1946, Whitman became one of the original 25 incorporators of what would become The Village of Bal Harbour.  Returned from the war and armed with both the knowledge he gained helping his family lease its retail real estate holdings on Miami Beach's Lincoln Road and the seed money he needed from buying and selling large swaths of oceanfront property up and down Miami-Dade's coastline, he partnered with the Village of Bal Harbour's developer, Robert Graham, to build the business district in the fledgling, one-square mile town of Bal Harbour.  By 1965, now fully in control of the Bal Harbour business district property, having bought out Graham's half-interest, Whitman presided over the opening of Bal Harbour Shops and for the next 51 years he kept making it better and better.

Although his accomplishments as a businessman and developer are many, he considered his commitment to community paramount.  He was privileged to serve as Chairman of the Dade Water & Sewer Authority, Chairman of the South Florida Highway Users Federation, Chairman and Founding Member of the Village of Bal Harbour Resort Tax Committee, and Original Organizer and Paul Harris Fellow of the Bal Harbour Rotary Club.  He was an Independent Director at SunBank (the predecessor entity to SunTrust), an Elder at Miami Shores Presbyterian Church, and a Trustee Emeritus at Miami Country Day School.  In addition to these institutions, to which he gave generously, he was also proud to support innumerable local charities, including the Buoniconti Fund to Cure Paralysis and the University of Miami's Miller School's Project: New Born.  For his innumerable contributions to his community, both Miami-Dade County and the Village of Bal Harbour recognized "Stanley F. Whitman Day" in separate proclamations in 1998 and 2015, respectively, the Urban Land Institute presented him with its Lifetime Achievement Award in 2013, and the Miami Beach Chamber of Commerce bestowed upon him in 2016 its Leondard A. "Doc" Baker Lifetime Achievement Award.