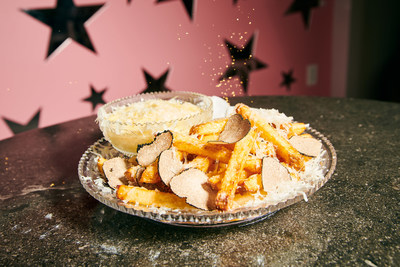 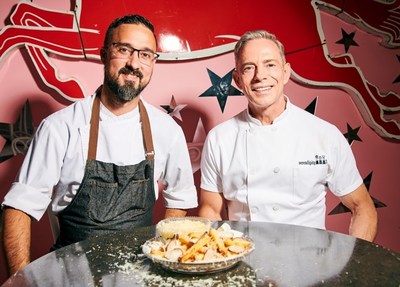 The record-breaking fries are thrice cooked in pure goose fat from Southwest France, made with the highest quality Chipperbeck potatoes. The potatoes are blanched in Dom Perignon Champagne and J. LeBlanc French Champagne Ardenne Vinegar. The fries are topped with shaved Crete Senesi Pecorino Tartufello and Black Summer Truffles from Italy and are seasoned with Guerande Truffle Salt. In addition, they are served with Mornay sauce made with Udder Cream, Black Truffle Butter, Gruyere Truffled Swiss Raclete, sprinkled with 23K edible gold dust and served on a Baccarat crystal Arabesque Plate.

"New York City has reawakened and the world is thrilled that Serendipity3 is back and better than ever," said Creative Director of Serendipity3, Chef Joe Calderone. "We are so honored to be recognized by GUINNESS WORLD RECORDS™ for our creation of the most expensive french fries, the Creme de la Creme Pommes Frites, and look forward to creating even more over-the-top recipes in the future."

For over 65 years, Serendipity3 has served as the home of the iconic Frrrozen Hot Chocolate and recently reopened its doors after over a year of renovations and revitalizations to the space, as well as some mouthwatering new menu items, and new part-time owner and investor on board, Selena Gomez.

This GUINNESS WORLD RECORDS title accompanies Serendipity3's existing records that include the most expensive milkshake, most expensive sandwich, and most expensive dessert. Their roster also features previous titles such as the largest wedding cake, largest cup of hot chocolate/cocoa, and more.

The fries are available for purchase with advance request. For more information on Serendipity3 and to book a reservation please visit: www.serendipity3.com.

About Serendipity3:Serendipity3, the legendary New York City restaurant and general store, founded in 1954, as one of the city's truly unique dining experiences. The home of amazing food and decadent desserts, such as the Frrrozen Hot Chocolate, Serendipity has been captivating millions of patrons since its inception. It's an enchanting place where artists got their inspiration and actors fulfilled their cravings. Beginning with Marilyn Monroe, Andy Warhol, Grace Kelly and Cary Grant in the 1950's, continuing with a celebrity following that includes Cher, Candice Bergen, Melanie Griffith and Ron Howard, the restaurant continues to attract celebrities such as Beyoncé, Ryan Reynolds, Selena Gomez and Kim Kardashian. In addition, the restaurant has been the setting of three major Hollywood productions, One Fine Day (1996) with George Clooney and Michelle Pfeiffer, Serendipity (2001) with John Cusack and Kate Beckinsale, and Trust The Man (2005) with Julianne Moore and David Duchovny.

Serendipity3 Commemorates The Return Of Broadway Stage With New...