VANCOUVER, BC, Oct. 13, 2021 /PRNewswire/ - Leviathan Gold Ltd. ("Leviathan", the "Company") (TSXV: LVX) (Germany: 0GP) wishes to clarify that supporting graphics referenced in the text of its press release of October 8 in relation to the initiation of drilling at the historic Leviathan Mine were erroneously omitted from certain newswire versions of said release. As such, the present release is issued in erratum. 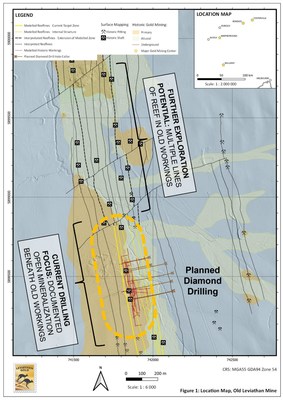 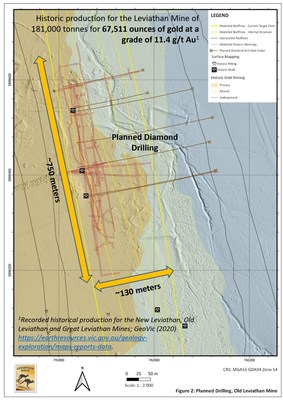 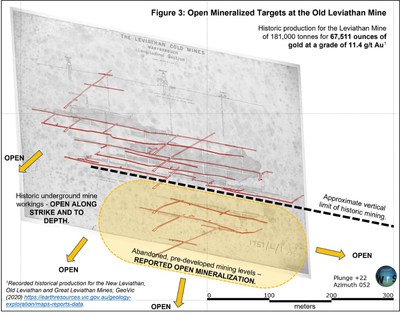 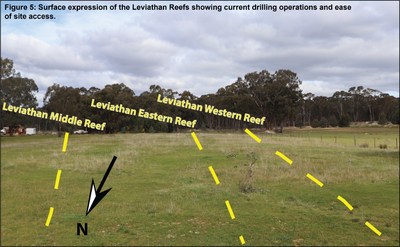 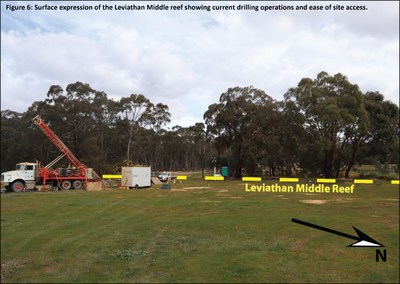 As previously reported, Leviathan's current drill targets and provisional drill locations are shown in Figures 1 and 2, oblique underground target projections in Figures 3 and 4, and site photographs illustrating the surface expression of the Leviathan reefs in Figures 5 and 6.

Leviathan Gold Chief Executive Officer, Luke Norman, remarked: "The work of Leviathan's geological team in developing drill targets at the historic Leviathan Mine – which is a culmination of the careful review and assembly of historic data, supported by modern field work – shows the presence of open mineralization beneath, and along strike from abandoned mine workings. Drilling works are now under way at the historic Leviathan Mine, and will be reported on in due course".

About Avoca and Timor

The Victorian goldfields are one of the world's major gold provinces, with recorded historic production in excess of 2,500 tonnes - or over 80 million ounces – of gold since their discovery in 18511. The Avoca and Timor projects comprise 223 square kilometers of exploration tenements within these goldfields, approximately 180 kilometers north west of the state capital of Melbourne. The Projects are well-served by modern infrastructure, are easily accessible via paved roads, and fall less than 100 kilometers from the regional cities of Bendigo and Ballarat, both long-established centers of mining services and expertise.

The Projects are located within an area of the Victorian goldfields, the golden triangle, that is home to large scale gold deposits with long and very prominent histories of production such as those at Ballarat, Bendigo and Castlemaine. More recently, major discoveries have also been made at the Fosterville Gold Mine near Bendigo (operated by Kirkland Lake Gold, recently merged with Agnico Eagle Mines Ltd.), which boasts reserves of 1.70 million ounces at an average grade of 23.1 g/t Au, including 1.16 million ounces at an average grade of 61.2 g/t Au2. Within the area being explored by Leviathan Gold hundreds of small historical gold mines are known to have existed within a 50 km radius of Avoca and Timor.

The Avoca and Timor projects were the subject of historical mining between the 1850's and the early 1900's, during which era operations targeted so-called alluvial and "deep lead" gold occurrences – buried secondary auriferous river-bed deposits - as well as primary vein-hosted mineralization developed via shaft and underground stoping methods. Such operations reportedly produced some 1.3 million ounces of gold in the Avoca and Timor project areas alone, the majority of this arising from alluvial and "deep lead" mining - a function of the richness of the alluvial mineralization around Maryborough, so great that it eclipsed the importance of reef mining. As such little capital was available for deep hard rock development3. The mining, water removal and ore processing methods of the day were rudimentary, such that only isolated extraction of shallow, near-surface, visible, high-grade mineralization was possible, resulting in only very selective and discontinuous mining. Over fifty such gold occurrences are known within the Projects, and despite this prodigious endowment, no systematic exploration of the Projects has occurred. With only limited exploration work having been recorded since WW1, numerous targets to test, and mineralization potentially open to depth at most of these, a rare opportunity exists for Leviathan to pursue a consolidated approach in the exploration of near-surface mineralization using modern drilling, geochemical and geophysical techniques.

Historical records are not historical resource estimates, but instead are official Government records of gold production from individual mines. Historical production records do not carry a comparable confidence level to a current Mineral Resource estimate reported in accordance with CIM standards for resource estimation and should not be treated as such. Leviathan does not treat historical production records as indicators of a current mineral resource or mineral reserve. The information relating to historical gold mines has not been independently verified by the Qualified Person and such information is not necessarily indicative of mineralisation on the properties that it the subject of this Press Release.

There are over thirty historical gold workings within the Avoca project area4, all of which require additional mapping, surface sampling and drill testing to assess their potential and on which the Company intends to report on an ongoing basis. The highest priority targets include:

The Timor project lies immediately east of the Avoca project and hosts numerous hardrock and alluvial gold deposits as evidenced by the extent of historic workings, of which approximately twenty hardrock workings can be considered to have been significant producers. The highest priority targets include:

The Leviathan Group of Mines and Shaw's Reef both lie on separate large regional north-south structures known to occur for tens of kilometers associated with hardrock workings over their length. Neither of these structures have witnessed significant drilling. These two mineralized structures will be a near-term focus for exploration within the Projects. Modern core orientation techniques which help with understanding the structural controls on mineralization, will be systematically applied during this program.

The technical content of this news release has been reviewed, verified and approved by Keith Whitehouse, AusIMM (CP), Exploration Manager of Leviathan Gold (Australia) Pty. Ltd., a qualified person as defined by NI 43-101.

On behalf of the Company,

Information set forth in this news release contains forward-looking statements that are based on assumptions as of the date of this news release, including with respect to geological prospects of Leviathan's mineral projects, planned exploration activities, success of exploration activities, the relevance of historical information, the continuation of mineralization, the relevance of comparable projects, the timing of exploration activities, general business and economic conditions; that applicable approvals are obtained; that qualified workers, financing, permits, approvals, and equipment are obtained in a timely manner; that market conditions continue; that contractual counterparties perform their obligations as required; and that Leviathan is able to locate sufficient financing for favourable ongoing operations. These statements reflect management's current estimates, beliefs, intentions and expectations. They are not guarantees of future performance. Leviathan cautions that all forward looking statements are inherently uncertain and that actual performance may be affected by many material factors, many of which are beyond Leviathan's control. Such factors include, among other things: risks and uncertainties relating to whether exploration activities will result in commercially viable quantities of mineralized materials; the possibility of changes to project parameters as plans continue to be refined; the ability to execute planned exploration and future drilling programs;COVID-19; the ability to obtain qualified workers, financing, permits, approvals, and equipment in a timely manner or at all and on reasonable terms; changes in the commodity and securities markets; non-performance by contractual counterparties; and general business and economic conditions, Accordingly, actual and future events, conditions and results may differ materially from the estimates, beliefs, intentions and expectations expressed or implied in the forward-looking information. Although Leviathan has attempted to identify important risks and factors that could cause actual actions, events or results to differ materially from those described in forward-looking statements, there may be other factors and risks that cause actions, events or results not to be as anticipated, estimated or intended. Consequently, undue reliance should not be placed on such forward-looking statements. In addition, all forward-looking statements in this press release are given as of the date hereof. Leviathan disclaims any intention or obligation to update or revise any forward-looking statements, whether as a result of new information, future events or otherwise, save and except as may be required by applicable securities laws. The forward-looking statements contained herein are expressly qualified by this disclaimer.

Leviathan Gold Ltd. Announces the Initiation of Drilling at the...

Leviathan Gold Ltd. Provides Update in Regard to its Victorian...