ISELIN, N.J., July 29, 2021 /PRNewswire/ -- Leading sexual wellness company, LifeStyles® Healthcare, is excited to announce a slew of recent accolades for its Publicly Traded campaign, which have contributed to making the campaign the most awarded sexual wellness campaign in 2021. Thanks to its breakthrough way of raising STI awareness, Publicly Traded took home 1 Grand Prix, 1 Gold, 4 Silvers and 5 Bronzes during the 2021 advertising and marketing award season from the world's most prestigious organizations, including Clio and Cannes Lions. 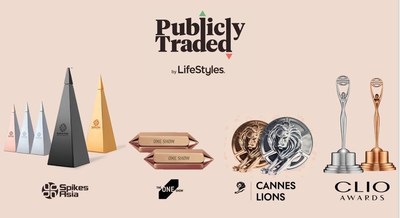 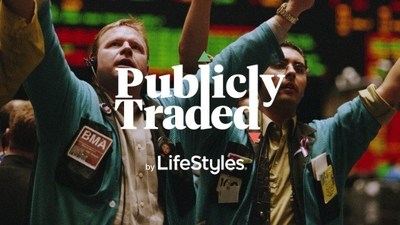 Prompted by reports indicating STI rates were at an all-time high, LifeStyles® Healthcare piloted a new campaign in August 2020 that went beyond traditional education, offering an instant, accessible way for consumers to stay protected.

With agency partner FCB/Six Toronto, the company created a platform where dynamic financial incentives were used to raise awareness of STIs while encouraging condom usage. As STIs can be "publicly traded" during unprotected sex, the Publicly Traded campaign was inspired by the stock market model to incentivize safer sex by tracking real-time Google Search data for STIs. The campaign platform stimulates purchase behavior through a smart data visualization designed to make condoms more accessible through discounting and instant online purchasing. As STI-related searches increased on Google, the price of condoms decreased, resulting in an immediate purchase discount for the consumer and a clever way to remember that STIs are "publicly traded" when condoms are not used.

"At LifeStyles®, we have always placed sexual education and well-being at the forefront of everything we do," said Marta Toth, Director of Global Marketing Strategy and Insights. "We hope the campaign will keep boosting self-education on STIs and remind people to make better educated decisions about their sexual health and activity."

Users on the Publicly Traded platform are also be able to set their own price alerts to get notified when LifeStyles® condoms reach their target price, similar to how online financial trading platforms allow users to set up price alerts for individual stocks.

For more information on the campaign, please reach out to Marta Toth ([email protected]), see the case video or visit www.PubliclyTraded.com.au.

About LifeStyles LifeStyles Healthcare's history dates back to 1905 when Eric Ansell first started making condoms in Richmond, Australia. Today LifeStyles is a global leader in the sexual wellness sector, comprising a broad range of condoms, personal lubricants and other related products. LifeStyles is the world's #2 condom company with leading latex brands such as LifeStyles®, Jissbon®, Manix®, Unimil®, Blowtex® and others, as well as the fast-growing, highly-innovative non-latex condom brand SKYN®. LifeStyles Healthcare was created on 1 September 2017 when the consortium of Humanwell Healthcare and CITIC Capital purchased the Sexual Wellness division from Ansell. LifeStyles, ® and ™ are trademarks owned by LifeStyles Healthcare, Pte. Ltd.