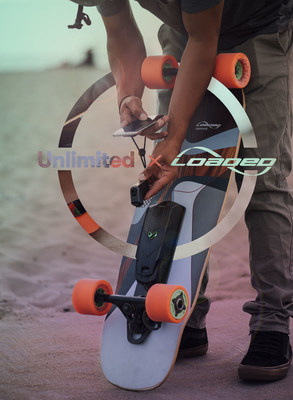 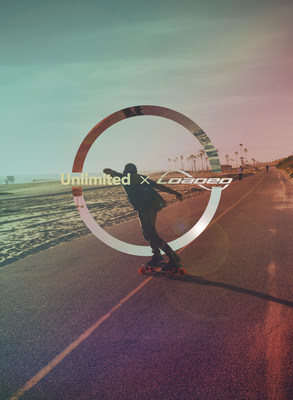 One of the unique features of this system is the ability to apply it to any skateboard. So if you have a favorite board you'd like to use that's an option, or go all in and treat yourself to one of the finely curated setups using Loaded, Paris, and Orangatang components.

"Our goal as a brand has always been to grow the action sports market as a whole (as opposed to viewing it as a fight for market share). What drew us to the Unlimited product, aside from the general performance and the stellar team, are a number of innovative features that we feel will help grow and expand e-boarding in new directions. Included in this is the ability to electrify any skateboard so as to retain the skate feel and to promote numerous brands and styles. Additionally, the ability to fine tune your ride to your personal preferences (acceleration, deceleration and max speed) is mind blowing!" says Loaded's Founder & CEO, Don Tashman.

Through this partnership, Loaded and Unlimited intend to help build and strengthen the global e-skate community and influence urban planning for the future of micro-mobility. "We feel that the passion and capabilities of the Unlimited team will allow us to explore uncharted and important new directions in e-skate and alt-transportation in general," says Tashman.

About Loaded BoardsLoaded Boards has been building longboards since 2002 and has been a driving force in the growth of carving, downhill, dancing, and freeride skateboarding. Loaded launched the Orangatang brand in 2008 to create high performance longboard wheels. Orangatang's signature orange color has become a staple across the industry; Orangatang has supplied their products to numerous high quality e-board brands including Evolve and Boosted (for whom Loaded also built the V1 and V2 decks). Loaded Boards has also been the worldwide distributor for the market-leading Paris Trucks since 2016. Loaded's mission is to grow board sports worldwide through performance, community and creative expression. www.loadedboards.com

About Unlimited EngineeringUnlimited was formed in Barcelona in 2016 by a group of good friends and engineers. Carlos Kübler, Juan Pablo Viera, and Alejandro Veloz founded the company, and Andres Brillembourg and Nicolas Veloz came aboard shortly thereafter. With strong backgrounds in tech, years of building race cars for the university circuit, and numerous advanced degrees in engineering (including a PhD in engineering, 3 masters in engineering, and an MBA from MIT), they teamed up to build cutting-edge electric vehicles. All five are avid skaters and mountain bikers.