MEXICO CITY, March 5, 2020 /PRNewswire/ -- Parents and schools are increasingly benefiting from technological tools that promote the educational and creative development of children. The use of music and videos on pre-school and elementary school children is in constant growth. School programs seek to enhance traditional learning in the classroom with the use of different devices, digital content with educational and recreational purposes, 3D design and 3D printing ecosystems. According to different studies, a child will remember only 10% of information he sees on a slideshow, 30% if he learns it with music or games, and 80% if the child is involved in the creative process of designing, from a simple molecule to even complex archaeological ruins (http://www.cca.org.mx/profesores/cursos/cep21/modulo_9/main_0.htm). 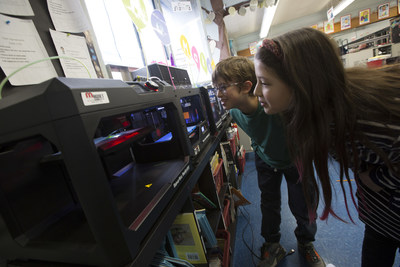 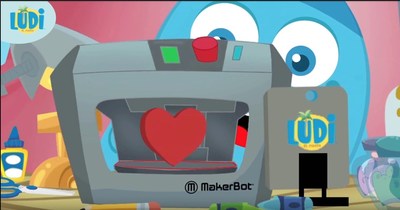 To support the positive use of new technologies among children, families and schools, Ludi el pirata and MakerBot, a global leader in the 3D printing industry, have developed the video, Creative Island, available on YouTube. Known for its ease of use and accessibility, schools across the world, from elementary classrooms to universities, utilize MakerBot's Replicator+ 3D printers in their curricula.

According to research from the connected consumer survey conducted by Google, between 45 to 55% of 3 to 4 year old Mexican children watch YouTube through an electronic device owned by an adult; while in 2017, it was reported that 21% of such population already had their own tablet.

Less than two weeks after it was released, the educational children's video, Creative Island by Ludi el pirata had reached more than 837,240 views. https://www.youtube.com/watch?v=xoNUGua9PNI. The video illustrates how Ludi el pirata (Ludi the pirate), amiga Lina (friend Lina) and perico Limon (Lemon the parrot) team up to create a 3D heart on a MakerBot 3D printer. Together, both brands show and promote collaboration through partnerships and teamwork; they communicate in a practical, original and fun way that people have the ability to create and innovate, and digital transformation allows the connection of ideas with technology.

The partnership between Ludi el pirata and MakerBot is made possible because both brands share the objective of contributing to education and use the technology in a positive manner. MakerBot provides a full 3D printing ecosystem, which offers collaborative tools that accompany children and teachers in the process of learning specific tasks and problem solving. Ludi el pirata offers animated videos; songs and videos for babies and songs and videos for children aimed at producing a call to action, encouraging kids to be creative and motivating them to engage in recreational and educational activities. This would help to achieve a perfect combination that acts as a catalyst to express feelings, emotions and skills, as well as ideas from children, teachers and parents, that contribute to the children's cognitive, social, physical and emotional development and learning process.