LAWRENCEBURG, Ky., April 10, 2018 /PRNewswire/ -- Today, Matthew McConaughey and the legendary Wild Turkey® Distillery are proud to announce the introduction of Wild Turkey Longbranch™, a collaboration between the iconic whiskey brand's creative director and Master Distiller Eddie Russell. Inspired by McConaughey's Kentucky and Texas roots, this rare small-batch Kentucky bourbon is refined with Texas Mesquite and oak charcoals – a unique method that deepens the flavor and complexity of the whiskey. This launch marks the first time Wild Turkey has unveiled a product that bears a signature of someone other than the Master Distillers Jimmy and Eddie Russell. A video of the creation of Wild Turkey Longbranch with McConaughey can be found here. 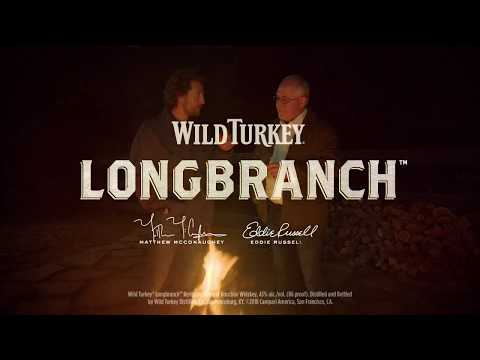 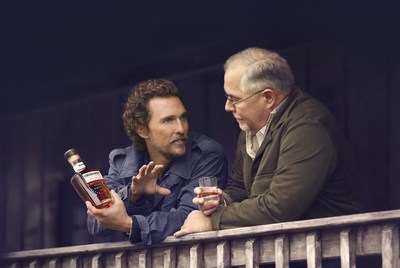 Wild Turkey Longbranch is the latest collaboration to come from the multi-year partnership with the Academy Award® winning actor. McConaughey, who has served as the brand's creative director since 2016, has worked behind the camera and in front of it in television commercials to reintroduce the world to Wild Turkey, and this new bourbon is a natural evolution of the partnership. The name is inspired by the friends that form the longest branches of our family trees.

The connections that McConaughey and the Russells have to both the great states of Kentucky and Texas were a major inspiration for this collaboration. McConaughey's parents met at the University of Kentucky, a mere 15 miles from the Wild Turkey Distillery, while Eddie Russell's youngest son, Bruce, now lives in McConaughey's hometown of Austin, Texas.

"Longbranch, in its simplest form, is an extended hand, inviting a friend into your family," McConaughey says. "So the branch that was extended to me from the Russells was a long one, one that reached from Kentucky to Texas and back again. I offered the Mesquite from my great state to add to their legendary Kentucky whiskey and together we made Longbranch."

To create Longbranch's signature flavor, McConaughey and Russell spent countless hours sharing notes, then, after two years of testing, perfected a proprietary process that combines two separate charcoal filtration methods to give Longbranch a smooth and full finish. The first filtration process uses charcoal made from American White Oak and the second uses charcoal made from Texas Mesquite wood, giving the bourbon notes of smoky sweetness.

Made with eight-year-old Wild Turkey Bourbon, Wild Turkey Longbranch is an exceptional bourbon with a bright gold color and aroma that is a balanced blend of vanilla and spices. Flavors of caramel, pear, and hints of citrus round out the palate. The subtle, smoky finish is buttery smooth, with notes of gentle pepper and toasted oak.  "When we were creating Wild Turkey Longbranch, we talked at length about how to make a product that represents elements of both Texas and Kentucky," said Wild Turkey Master Distiller Eddie Russell. "Our goal was to make a straight bourbon whiskey with a soft sweetness that was still unmistakably Wild Turkey. The result was a bourbon that we both truly enjoy drinking neat, and look forward to sharing with others."

"Matthew McConaughey has been ingrained in the Wild Turkey brand as creative director for several years now," said Bob Kunze-Concewitz, CEO at Campari Group, owner of Wild Turkey. "As a lover of bourbon, and an integral part of the team, it was a natural next step for Matthew to partner with Eddie to create a new product for Wild Turkey. We are proud of the work they've done and have great expectations for this amazing new whiskey."

Wild Turkey Longbranch will be available on shelves across the US in May for a suggested retail price of $39.99 and will roll-out to additional markets around the world later this year.

About Matthew McConaugheyTexas native Matthew McConaughey is one of Hollywood's most sought-after leading men. A chance meeting in Austin with casting director and producer Don Phillips led him to director Richard Linklater, who launched the actor's career in the cult classic "Dazed and Confused." Since then, he has appeared in over 40 feature films that have grossed over $1 billion; and has become a producer, director, and philanthropist – all the while sticking to his Texas roots and "jk livin" philosophy.

2014 was a game-changing year for McConaughey.  For his riveting portrayal of Ron Woodruff in "Dallas Buyers Club," McConaughey received an Academy Award®, Golden Globe Award, Screen Actors Guild Award and Gotham Award for Best Actor, the Best Actor Award at the Rome Film Festival as well as the Desert Palm Achievement Actor Award at the Palm Springs Film Festival.  He also made the move to TV starring alongside Woody Harrelson in the HBO dramatic series "True Detective." The show was met by rave reviews from critics and fans alike and earned Matthew a Critics Choice and TCA Award for Best Actor in a Drama Series as well as an Emmy Nomination. McConaughey can next be seen in "White Boy Rick" and opposite Anne Hathaway in "Serenity".

In 2008, Mr. McConaughey started The just keep livin Foundation (www.jklivinfoundation.org), which is dedicated to helping boys and girls transform into men and women through programs that teach the importance of decision-making, health, education, and active living. The Foundation has partnered with Communities in Schools (CIS) – the nation's largest, non-profit, dropout-prevention organization –in West Los Angeles to implement fitness and wellness programs in two large urban high schools. Through an afterschool program, they are able to give kids a healthy start in life and the promise of a healthy future.

About Wild TurkeyThe Distillery for Wild Turkey Bourbon is located in Kentucky, situated on a deep limestone shelf on the Kentucky River. The shelf acts as a natural filter and provides the distillery with crystal clear water, vital to making such a high quality product. Wild Turkey features the legendary father and son Master Distilling team of Jimmy and Eddie Russell, who have nearly 100 years of collective experience working at the Wild Turkey distillery.

The famous Wild Turkey brand name first came about back in 1940 when distillery executive Thomas McCarthey took a few warehouse samples on a Wild Turkey hunting trip with a group of friends. The following year, his friends asked him for "some of that Wild Turkey whiskey" and the brand was born.

Wild Turkey is distilled and put into new oak barrels at a much lower ABV than most bourbons. This results in a much richer flavor, as less is cooked out during the production process. Ageing in the highest quality new American oak barrels with the heaviest char available (the Number 4 "alligator" char), imparts a smooth flavor and deep amber color to the whiskey.

The barrels are filled at the distillery in Lawrenceburg, Kentucky. Website: www.wildturkeybourbon.com

About Campari GroupCampari Group is a major player in the global spirits industry, with a portfolio of over 50 premium and super premium brands, spreading across Global, Regional and Local priorities. Global Priorities, the Group's key focus, include Aperol, Appleton Estate, Campari, SKYY, Wild Turkey and Grand Marnier. Campari Group was founded in 1860 and today is the sixth-largest player worldwide in the premium spirits industry. It has a global distribution reach, trading in over 190 nations around the world with leading positions in Europe and the Americas. Campari Group's growth strategy aims to combine organic growth through strong brand building and external growth via selective acquisitions of brands and businesses.

Headquartered in Milan, Italy, Campari Group owns 18 plants worldwide and has its own distribution network in 20 countries. Campari Group employs approximately 4,000 people. The shares of the parent company Davide Campari-Milano S.p.A. (Reuters CPRI.MI - Bloomberg CPR IM) have been listed on the Italian Stock Exchange since 2001. For more information: http://www.camparigroup.com/en