BOSTON, Oct. 16, 2017 /PRNewswire/ -- With condoms, proper size matters. ONE® Condoms launches myONE® Perfect Fit, a game-changing new product line of 60 different condom sizes. Now available in the United States, myONE Perfect Fit offers condoms with combinations of 10 lengths and 9 widths. These include sizes smaller and larger than what was previously available to condom users in America. With 60 condom sizes, myONE is designed to finally address the top complaints about condoms: they don't fit and are uncomfortable. 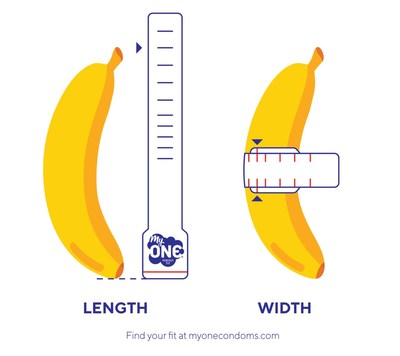 It's no secret than many people don't like to use condoms. Common complaints focus on issues related to fit and feel, such as the condom being too loose, tight, short or long. Poor condom fit is a contributing factor to loss of sensation, loss of erection, and difficulty achieving orgasm.[1] In cases where the condom slips off or is removed prematurely, there is an increased risk of unintended pregnancy and sexually transmitted infections (STIs).

Surprisingly, previously available condoms properly fit only 12 percent of men.[2] Here are some examples of the problems that people face with existing condoms:

Condoms too long: Most condoms are nearly 7 inches long—more than one inch too long for the average penis (5.57 inches). In one study sample of 1,661 men in the United States, 82.83 percent of participants had a penis shorter than the length of a standard condom.[3] As a result, for many men the condom will not unroll completely, causing a rubber-band effect at the base of the penis—resulting in tightness and discomfort. If the condom does unroll, the extra length can hang off the tip of the penis and potentially cause it to slip or be pulled off.

Condoms too short: Even though most condoms are longer than the average penis, there are many people that have a penis that is longer than existing XL condoms. This leaves the base of the penis unprotected from skin-to-skin transmission of STIs.

Condoms too wide (loose): People who have a penis smaller in circumference than existing condoms often report issues related to the condom slipping off.

Condoms too tight: Previously available XL condoms are only a few millimeters wider than the standard condom. For men who are significantly thicker than average, they will not notice a significant improvement with existing XL condoms.

"After years of dedication and hard work, we are thrilled to announce a condom that will finally address complaints about fit," said Davin Wedel, president of ONE Condoms. "You might be able to squeeze your large hands into a size-small glove, but that doesn't mean it will be comfortable to wear. We want the world to know you shouldn't have to sacrifice comfort for safety when it comes to condoms. Whether big, small or in between, myONE has a condom perfect for you."

Condoms are classified as Class II medical devices under the Food and Drug Administration (FDA) and conform to safety and testing standards set by the International Organization for Standardization (ISO) and ASTM International. Previously, the only testing standard that existed for new condoms was based on the one-size-fits-all model. This meant that all condoms sold in the United States prior to myONE were required to be at least 6.7 inches long and between 1.9 and 2.2 inches wide in nominal width[4], which did not accurately reflect the wide range of penis sizes.

Bringing myONE Perfect Fit to the U.S. market has been an ongoing process, spanning over seven years, and has required extensive work among researchers, standards organizations, and ONE's R&D and manufacturing experts. This effort resulted in updated testing standards and the eventual FDA clearance for myONE Perfect Fit in the United States.

Offering 60 different condom sizes is also a major manufacturing challenge, because it requires the creation of cylindrical glass moulds in all the 60 different sizes. Normally, over 3,000 expensive glass molds are on a production line for each size of condom. Therefore, having 60 different sizes is not only incredibly expensive, but the time to change the lines over is a challenge.

"Although manufacturing myONE is a significant investment and required specialized manufacturing processes and equipment to be developed, we are strongly invested in myONE and its potential to increase condom use overall," said Davin Wedel.

ONE was founded on the principle of promoting safer sex through condom innovation and design. MyONE is the next evolution in condoms and allows men who have previously not been satisfied with the fit of standard condoms to have a more pleasurable experience.

"MyONE has the potential to change people's perception of condoms and ultimately, reduce the number of unintended pregnancies and STI occurrences," says Davin Wedel. "We're committed to bringing a smart solution to market by offering comfortable condoms at affordable pricing. In fact, we're giving away 1 million condoms to help men find their fit."

The effect that myONE may have on public health efforts is particularly important to Wedel, who founded the company in 1987 with a mission to make condoms as socially acceptable as toothpaste in an effort to prevent the transmission of HIV.

Get It Up, Size It Up, Order It Up. In order to buy myONE Perfect Fit condoms, customers use a FitKit or a measuring tape to measure their length and circumference, and receive a unique product code that corresponds to their myONE size. The FitKit comes as a printable measuring tool complete with instructions, downloadable at www.myonecondoms.com. Customers can also get a size recommendation from myONE based on a questionnaire on previous condom experiences.

People searching for their myONE Perfect Fit size can order a sample kit, including the size they measured plus a size smaller and larger to find their true perfect fit. Customers will pay only $2 for shipping, which will be credited to their next online purchase. MyONE condoms and sample kits are available at www.myonecondoms.com and shipped in discreet packaging.

Launched in 2004, the ONE® brand strives to increase condom usage and facilitate conversations about sexual health by surprising, delighting, and engaging people in ways no one else can. As a leader in premium-branded condoms and lubricants in North America, ONE brings a fresh perspective to sexual health through a fusion of advanced product design, manufacturing technology, customer participation, and social responsibility. ONE is a member of the Global Protection Corp. family of sexual health products founded by Davin Wedel with a mission to make condoms as socially acceptable as toothpaste.

All ONE Condoms are manufactured by Karex Berhad, the world's largest condom manufacturer. A trusted partner for over 20 years, Karex Berhad purchased a stake in Global Protection in 2015 for the purpose of expanding the ONE brand throughout the world. For more information, go to www.myonecondoms.com and www.onecondoms.com.

[2] Five years of sales data from TheyFit, what myONE is currently called in Europe.

[4] Regulatory entities and manufacturers measure the width of a condom using lay flat width (often called nominal width). However, men use circumference to talk about their thickness or girth, because that's how you measure.