NEW YORK, Oct. 2, 2019 /PRNewswire/ -- Cleo, the money management app with a sense of humor and zero tolerance policy for bullsh*t, has announced their U.S arrival from their base in London. Unlike competitors in the market, Cleo is not a banking app and she doesn't want your money. For millennials, the 2008 recession and Occupy Wall Street movement are still fresh in their minds, leading to a general distrust of banks, and Gen Z's are no different – with a high level of general distrust of "big banks" and fear of falling into student loan debt. 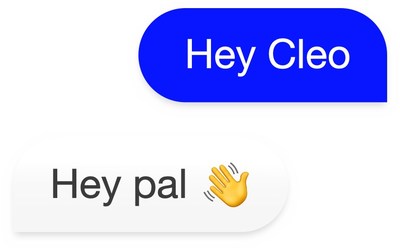 Founded by data scientist, Barnaby Hussey-Yeo, Cleo started off as a fun, quirky tool for friends to help themselves budget and spiraled into a revolution for money management. After quickly picking up 600,000 users within a year and a half of launch, Cleo launched an alpha version in the U.S. this past April, growing at triple the speed of users across the pond.

"For decades, banks used data to predict how likely customers would overdraft their accounts or pay back their mortgages. Now, with CLEO, it's the customers' turn to benefit from data," said Hussey-Yeo. "In lieu, Cleo gives our users the tools to make the most of their own spending data and ensures they're the only person who profits from it."

Playfully and purposefully named after a trusted "friend," Cleo's success is rooted in her ability to communicate with the younger demographic on their own terms – via chat options on their phone that are available around the clock for instant gratification. The app has turned the money game around, making something that used to be tedious and boring into a radically simple, fun and engaging resource.

Drunk at 3AM and wondering whether you can afford pizza or fries to sober up? Text Cleo and she will likely clap-back in a voice that sounds more like a close friend versus stoic robot. The dedicated, cult-like personality has led to a whopping 67 percent of users continuing to use Cleo on a monthly basis within six months of downloading. On average, users have about 14 conversations per month, and while 81 percent report they feel stressed about money, another 78 percent say Cleo helps them to reduce their financial worries.

Not only does Cleo's autosave feature save users on average over $20 a month, but there is much more:👉A highly engaging way of building savings, tracking spending habits and staving off bank fees👉The go-to place for full visibility on all your accounts👉Cleo Plus: Cash back, salary advances and up to 2 percent interest on your savings

Motivational modes🔥Roast me: A terrifying face-full of you own data when you need a jolt🙌Hype me: The banks aren't really on your side. Cleo is though. Hit for instant good vibes🔮Fortune mode: Predicting your future f*ck ups before you can do them

About CleoShe started out in London and hit the US market in summer 2018: now over 2 million people have signed up. That's 1.8 million roasts, 900,000 celebratory 'you got paid!' gifs and 3,000 new people signing up every day to take control of their money. To us, it's a real signifier that the attitude to money is changing. It's a shift in power, a new standard of transparency and a fairer system.To everyone who has signed up: you're making the banks work harder. Let's keep at it.

Want to meet the team?We're running a Scavenger Hunt in New York to meet 100 of our US users. Join Tuesday, October 8th for drinks (and real-time roasting) on us.