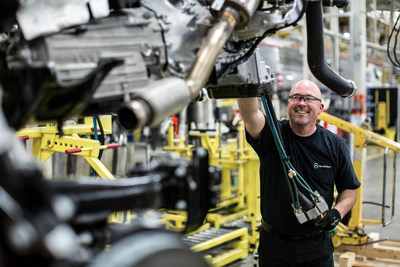 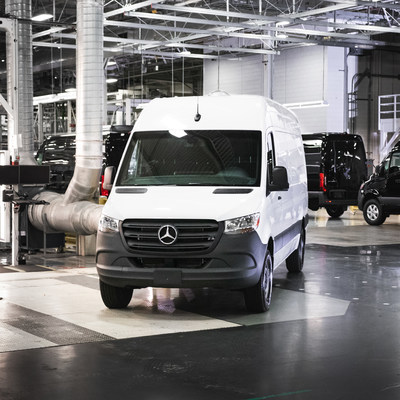 Mercedes-Benz Vans has opened its new Sprinter plant for the North American market. After considering the high market potential for the new Sprinter in North America, the decision to build a new production facility in time for the launch of the new Sprinter model in the USA was announced in March 2015. The facility in North Charleston, South Carolina, is now up and running following a two year construction period. The total investment adds up to approx. 500 million dollars with more than 900 people working at the expanded North Charleston site, that number is set to grow up to 1,300 by the end of 2020. According to estimations, suppliers will create an additional 600 new jobs in and around North Charleston.

"The USA is already the second largest market for our Sprinter today. With the new, state-of-the-art production site in South Carolina, we will be able to supply our customers in North America even faster and with more flexibility in the future. This makes better use of the dynamic market potential, placing our new plant in North Charleston as a central component of our growth strategy 'Mercedes-Benz Vans goes global,'" said Volker Mornhinweg, Head of Mercedes-Benz Vans.

"The new plant in North Charleston combines our global expertise and experience resulting in a state-of-the-art facility in every respect. It is a valuable asset that completes our global production network. Our priority at Mercedes-Benz Vans during the planning process for this facility was maximum flexibility. This enables us to react in an agile and anticipatory manner to current developments and customer desires. Additionally, it guarantees excellent quality within our proven, standardized production system," said Frank Klein, Head of Operations Mercedes-Benz Vans.

To coincide with the opening, Mercedes-Benz Vans also announced it will be producing Amazon branded Sprinter vans for the retail company's new Delivery Service Partner program at the new plant. Small business owners will work with third-party fleet management companies to procure their customized vans and get special leases in order to keep their startup costs low.

"We're proud to partner with Mercedes-Benz Vans to contribute to local economies through the order of Amazon branded Sprinter vans produced at their new plant in North Charleston," said Dave Clark, Amazon's Senior Vice President of Worldwide Operations. "Thanks to the tremendous response to Amazon's new Delivery Service Partner program, we are excited to increase our original order of branded Sprinter vans to 20,000 vehicles so new small businesses will have access to a customized fleet to power deliveries of Amazon packages."

The opening could not come at a better time – 2018 marks the U.S. market launch of the new generation of the highly acclaimed van.

The third generation of the Mercedes-Benz Sprinter defines the top class of large vans in all sub-disciplines. Its classic strengths have been improved upon and are complemented by new intelligent products and services.

Among the outstanding innovations in the North American market are the new multimedia systems MBUX (Mercedes-Benz User Experience), the control and display concept in the cockpit, as well as ergonomically shaped seats and modern assistance systems - some of them were taken over by the car sector and, for the first time, found their way into a Mercedes-Benz van.

New standards are being set in the field of digitization and connectivity, which is why the new Sprinter can be described as the first van in a new category with a holistic overall system solution. The previously available version of the proven Mercedes-Benz Sprinter was in high demand among customers in the USA, the second largest market in the world for Sprinter vans.

Since 2006, Semi-Knocked-Down kits have been assembled in North Charleston for imported Sprinter vans and since 2015 also for imported Metris Midsize Vans (known in other markets as "Vito"). With the new plant and the "made in USA" vehicles, the business area will be able to serve the growing demand of North American customers more economically and significantly reduce delivery times in this market.

The new Sprinter will be made under the brands Mercedes-Benz and Freightliner.

Mercedes-Benz has put the full weight of its technical expertise into the North Charleston location. The new factory expands upon the existing Mercedes-Benz Vans assembly plant with additional facilities, including body shop, paint shop and final assembly. The company is implementing its most innovative production technologies and concepts at the location, making it one of the most modern of its kind in North America and an integral part of Mercedes-Benz Vans' global production network.

The expansion of the production facility has tripled its footprint, now covering 222 acres or nearly 10 million square ft. The production and office building area comes now to around 41 acres or 1.8 million square ft., supplemented by free and logistics space. Central to the innovations are connectivity and digital communication in manufacturing due to continuously growing demands for flexibility and efficiency in production and to the increasing diversity of vehicle variants and sales figures continuing to rise.

Employees are also benefitting from increased digitalization as it minimizes routine and repetitive tasks, giving them more time for higher-value work. The outstanding innovations include self-driving transport systems, the shift to paperless, digital communication and new opportunities provided by virtual employee training.

Like other locations within the Mercedes-Benz Vans production network, the plant in North Charleston is equipped with driverless transport systems – which can travel more than 40 miles in one shift. They are controlled through networking with the plant's IT system and via RFID (radio-frequency identification) technology. The associated transponders, incorporated into the factory floors, receive the necessary driving commands. The vehicles can also use Bluetooth to communicate with one another and coordinate automatically, thus guaranteeing smooth traffic flow at all times.

Among the biggest transformations is the paperless, digital production documentation, based on RFID technology. It means the position of a specific component can be pinpointed precisely at any given time with contactless, automatic identification and localization. This information allows employees in logistics and production to feasibly adjust to process changes. Moreover, quality assurance personnel can ascertain that the correct part has been installed in the correct vehicle. Relative to conventional processes, RFID technology has made it possible to eliminate several steps of documentation, with one example being the manual scanning of barcodes. This not only saves time and money but also reduces the number of potential sources of error.

At every Mercedes-Benz plant, personnel remains the most important factor when it comes to quality. At the North Charleston plant, conventional methods are amplified by digital training tools to help prepare them for their jobs. Due to the diversity of body types, powertrain concepts, body lengths, tonnages, cargo-space heights and equipment options, the new Sprinter is available in more than 1,700 variants. Each and every employee has to learn around 900 individual process steps in a specific order to enable them to build the new Sprinter. With the utilization of digital tools, this process is now efficient and sustainable. In assembly, employees can use an on-screen approach similar to that of a computer game to familiarize themselves with procedures and components. Previously, training for assembly work was conducted purely on pre-production vehicles. Training of paint-shop personnel is likewise aided by digital techniques. For example, they are able to use Virtual Reality (VR) spectacles and VR paint guns for realistic simulation of the painting process.

Daimler AG: Management Board appointments for Truck CEO Daum and...