LOS ANGELES, Dec. 12, 2018 /PRNewswire/ -- MeWe announces it is now the leading social network challenging the social media status quo. In December it has ranked multiple days as the #1 Trending Social App in the Google Play Store. MeWe is adding 30,000 new members daily, and its 300% annual growth is completely organic - the company is running no advertisements.

MeWe is advised by the inventor of the Web, Sir Tim Berners-Lee and its CEO, Mark Weinstein, is a leading privacy advocate and social media pioneer. 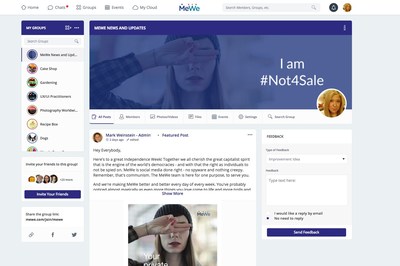 MeWe's rapid growth is due to multiple factors: backlash against Facebook's broad censorship, privacy infractions, and LGBTQ violations; discontent at Twitter for censorship of conservatives; the announced closure of Google+; and recent policy changes at Tumblr.

"People worldwide are joining MeWe," says Weinstein, "because they've had enough BS from current mainstream social media sites. MeWe has no political bias, no ads, no newsfeed manipulation, and no spyware. MeWe members are customers to serve, not data to sell. MeWe is a social network for the world that has a remarkable suite of features people love. MeWe's rapid growth reflects the demand people have for a social site and leadership team they can love and trust."

MeWe has been awarded Start-Up of the Year Finalist for Innovative World Technology at SXSW, and honored as one of the Best Entrepreneurial Companies In America by Entrepreneur Magazine. MeWe was recently listed the #1 Facebook Alternative on Zero Hedge.

MeWe members are protected by the company's "Privacy Bill of Rights", which provides total control over what they share and full ownership of their content and data. MeWe's TOS reigns in any bad actors. MeWe is "free forever" with a robust freemium revenue model and generates enterprise revenue from MeWePRO.