CHICAGO, March 8, 2021 /PRNewswire/ -- Today, Miller Lite is announcing the launch of the Miller Lite Level Up Fund, a $100,000 grant program that aims to provide financial support to uncelebrated communities in the gaming world. Coinciding with International Women's Day on Monday, March 8, the Fund will raise awareness for the inspiring female streamers that deserve greater recognition and access to resources, compared to what their male counterparts receive. For example, the top 100 male players have earned $192.4 million, whereas the top 100 females account for only $2.8 million, a disparity of 6,863%*. Additionally, only 18% of games shown at 2020's E3 conference featured female protagonists**.

"Miller Lite has a strong connection to the gaming community and has partnered with uncelebrated communities in the past," said Lauren Cassel, associate marketing manager for Miller Lite. "Launching the Miller Lite Level Up Fund on International Women's Day and spotlighting the incredible women in gaming is just the beginning. Throughout the year, we will also shine light on and support LGBTQ+, Latinx, and Black gamers so they also get the recognition they deserve."

It's not the first time Miller Lite has put the spotlight on uncelebrated communities, so it only felt right that the brand include and recognize all gaming communities.

On International Women's Day, Miller Lite will join Lowco, Xmiramira, Ashley Roboto and Fuslie on Twitch to launch the Miller Lite Level Up Fund. The livestream will focus on what it means to be a woman in gaming, the challenges female gamers face and ways in which the gaming community can help. Head to twitch.tv/MillerLite at 5pm CST to join the conversation.

Miller Lite will grant a total of $100,000 to 20 gamers and aspiring gamers. The program runs 8 months with applications being judged and winners announced around June, September and December. The call for submissions will be available beginning early April but gamers can visit millerlite.com/levelupfund now to enter their email to be notified when the application periods are open.***

Miller Lite is the original light beer, founded in 1975 with only 96 calories and 3.2 grams of carbs. For decades Miller Lite has been known as a great tasting, less filling American pilsner beer best enjoyed with friends. For more information visit www.MillerLite.com.

* https://www.thegamer.com/women-in-esports-are-getting-paid-way-way-less-than-men/ ** https://www.wired.com/story/women-video-games-representation-e3/ *** NO PURCHASE NECESSARY. Contest entry phase begins at or about 12:00 PM CT on 3/29/21] and ends at 11:59:59 PM CT on 11/23/21. Contest includes 3 entry periods. Open only to legal residents of the 50 US/DC, 21+ years of age. Must have a public Twitch, Instagram, and/or Twitter account. For Official Rules, including how to enter, entry period dates, judging criteria, prize details, and restrictions, visit www.promorules.com/PL015084. Void where prohibited. Msg&data rates may apply

About Miller Brewing Company Miller Brewing Company was founded in 1855 by Frederick J. Miller when he purchased the Plank Road Brewery in Milwaukee, a city he chose as the best place for a brewery given its access to great water. Miller Lite, the original great-tasting light pilsner beer, (MillerLite.com, Facebook.com/MillerLite, @MillerLite on Twitter, YouTube.com/MillerLite) was introduced nationally in 1975 and is among the top-five selling beers in the United States. The brewery's oldest enduring beer is Miller High Life (MillerHighLife.com, Facebook.com/MillerHighLife, @MillerHighLife on Twitter). Known as the Champagne of Beers, it was introduced in 1903 and still is brewed with the same yeast strain that Miller carried in his pocket from Germany. Miller Genuine Draft (MGD.com, Facebook.com/MillerGenuineDraft, @Miller_Global on Twitter), introduced in 1986, is the original cold-filtered, packaged draft beer. 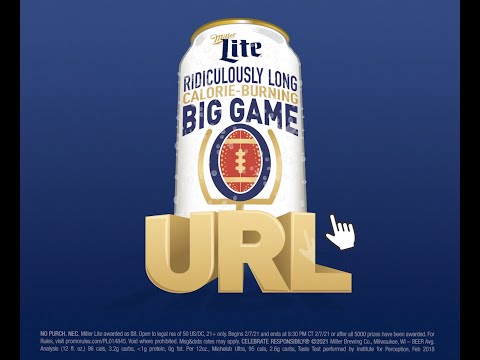