CLEAR, Alaska and MOORESTOWN, N.J., Aug. 6, 2019 /PRNewswire/ -- The Missile Defense Agency's (MDA) Long Range Discrimination Radar (LRDR) program has completed delivery of its first radar panel to Clear, Alaska and placement of the final beam on the radar shelter as the program continues to successfully achieve all milestones and work towards delivery to the Missile Defense Agency (MDA) in 2020 at its Clear, Alaska site. The radar system will serve as a critical sensor within MDA's layered defense strategy to protect the U.S. homeland from ballistic missile attacks. 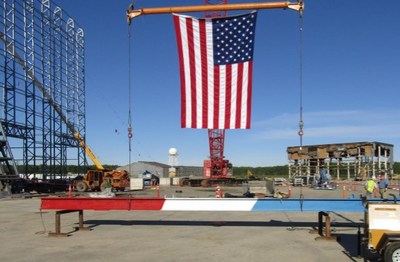 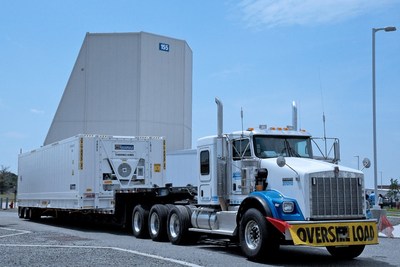 On the heels of completing System Technology Readiness Level 7 testing in December 2018, the LRDR program has been steadily ramping up to full-rate manufacturing. "Completion of Technology Readiness Level 7 testing provided Lockheed Martin (NYSE: LMT) and the MDA customer confidence that the program was ready to ramp up production of the radar," said Chandra Marshall, director of Lockheed Martin's MDA Radars. "Lockheed Martin utilized production representative hardware, as well as tactical back end processing and software in our Solid State Radar Integration Site (SSRIS) to successfully demonstrate system performance in an operational environment in 2018." Lockheed Martin invested in this state-of-the-art radar facility to reduce risk to execution of the LRDR program.

The LRDR program successfully manufactured and shipped the system's first radar panel to Clear Air Force Station in Alaska. The 5,000-mile trip began at Lockheed Martin's facility in Moorestown, N.J. The panel, which is approximately 27 feet tall, left the site via truck.

The panel is just one of 20 that will be shipped to Alaska in the coming months as manufacturing and construction of the radar site continue to progress on schedule. The panels will make up the radar's two antenna faces, both approximately four stories high and wide.

The installation and integration of the radar system will begin this year followed by the transition to the testing period.

Construction of the framework for the facility in Clear, Alaska, which will house the radar system, has been completed. The final beam, painted in red, white and blue, was installed in June. Approximately 1,800 tons of steel will be used to build the facility.

"Crews from Lockheed Martin, Haskell Davis Joint Venture and local Alaskan contractors have worked through challenging conditions, including sub-zero temperatures, in constructing the radar facility," said Marshall. "We've made the necessary safety accommodations so that our team remains on schedule to ensure LRDR's critical capabilities will be delivered to MDA to defend the homeland."

The LRDR program is built upon S-Band radar technology and is the latest in a long line of S-Band radars developed by Lockheed Martin, including the Aegis Combat System, Space Fence and Aegis Ashore. Lockheed Martin has demonstrated its commitment to advancing SSR technology and addressing emerging and evolving threats. In 2018, the Missile Defense Agency awarded the company a contract to design, manufacture and construct the Homeland Defense Radar for Hawaii.

About Lockheed MartinHeadquartered in Bethesda, Maryland, Lockheed Martin is a global security and aerospace company that employs approximately 105,000 people worldwide and is principally engaged in the research, design, development, manufacture, integration and sustainment of advanced technology systems, products and services.