GameAnalytics is used by many leading hyper-casual publishers (including Voodoo, Supersonic, Rollic and Madbox), reaching more than ⅓ of the globe's players each month. 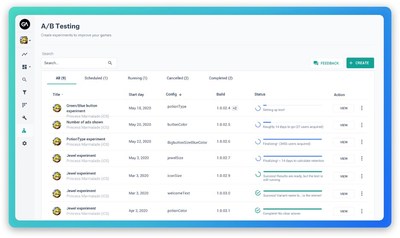 This A/B testing solution is currently available free of charge for GameAnalytics users for the remainder of the year - after which a premium version will be released in early 2021. Even after the introduction of a premium tier, GameAnalytics has stated that they aim to continue offering a free tier, specifically aimed at smaller indie developers still working towards their first major hit.

"Over the past months, we've been working closely with some of the biggest mobile game publishers around the world to make an A/B testing solution that finally meets their needs", said Nikolaj Pedersen, VP of Product at GameAnalytics. "Most solutions currently available on the market are tailored to the wider app ecosystem, with inflated pricing that's not appropriate for the typical ARPDAU seen in casual mobile games. With our new A/B testing solution, we're aiming to change that by providing advanced functionality, such as reliably targeting all new users, along with a free tier for indies who are just starting out."

According to GameAnalytics, their A/B testing service is a high-performance solution specifically built for mobile games, and able to run experiments in real-time across segments that each include tens of millions of players. This provides the scale of data needed to answer common questions raised when tweaking elements of game design and monetization.

Use-cases are wide-reaching, but some examples provided by GameAnalytics include:

Once enough new users enter a test group, the service calculates if there's a winning variant and provides the results in an actionable table. A particular variant can then be picked and that top-performing game variant or build can quickly get rolled out for wider release.

GameAnalytics uses statistical analysis to check if the differences were coincidental, or if they were caused by deliberate changes introduced in one of the test variants. Every test starts by collecting data from each variant to identify a latent property, from which a positive or negative outcome is measured. For example, to test changes in playtime per user, GameAnalytics calculates the latent session length distribution in order to set an accurate "goal metric".

All developers can get started with A/B testing today by logging in to their free GameAnalytics account and visiting 'GA Labs' on the official GameAnalytics site.