LOS ANGELES, Sept. 4, 2020 /PRNewswire/ -- Monkey Knife Fight (MKF), the fastest growing fantasy sports platform in North America, announced a partnership with the San Francisco Giants and a donation of at least $50,000 to the Giants Community Fund. Since March, the Fund has converted the majority of its programming to help families affected by the challenges caused by COVID-19. 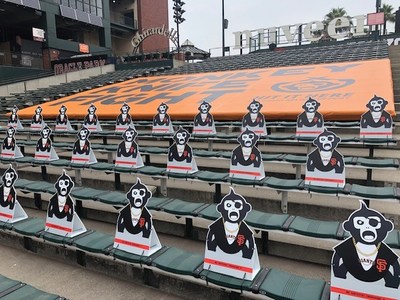 An outfield tarp and cutouts of MKF's logo, Furious George, will be placed in Oracle Park. Monkey Knife Fight will donate $10,000 each time a ball hits either the "Hit It Here" tarp or one of the cutouts. The daily fantasy sports site will donate a minimum of $50,000 with no limit.

"It's important for Monkey Knife Fight to give back to our communities, especially those that struggle with access to resources," said Bill Asher, Founder and CEO of Monkey Knife Fight. "The Giants Community Fund does amazing and impactful work in San Francisco and throughout Northern California, and we wanted to be a part of that."

"The San Francisco Giants are proud to partner with Monkey Knife Fight at Oracle Park this season and showcase their innovative gaming platform to our fans," said Jason Pearl, Senior Vice President and Chief Business Development Officer of the Giants. "We are thankful for the generous support Monkey Knife Fight will provide to the Giants Community Fund which will help those most in need in our community during these difficult times."

About the San Francisco GiantsOne of the oldest teams in Major League Baseball, the 138-year old franchise moved to San Francisco from New York in 1958. After playing a total of 42 years in Seals Stadium and Candlestick Park, the team moved to the privately constructed, downtown ballpark on the corner of 3rd and King. 2020 marks the Giants 20th year at Oracle Park and 21st season playing on the shores of McCovey Cove. The organization is widely recognized for its innovative business practices and baseball excellence. In 2010, the franchise was named the Sports Organization of the Year by Street & Smith's Sports Business Journal and in 2012 was named Organization of the Year by Baseball America. Oracle Park is also the only ballpark in the country to have earned Silver, Gold and Platinum LEED certification for an existing building.

Since opening its gates, Oracle Park has become internationally-renowned as a premier venue in the world of both sports and entertainment. On the diamond, more than 61 million spectators have witnessed a number of magical moments including three World Series Championships (2010, 2012 & 2014), bringing the franchise total to eight World Series titles, the raising of four National League Pennants and seven playoff appearances. On June 13, 2012, the organization's first-ever Perfect Game was thrown by Giants ace Matt Cain. On July 10, 2007, San Francisco was the center of the baseball universe when it hosted the 78th Major League Baseball All-Star Game. The ballpark has played host to some of music's biggest acts, including Lady Gaga, Beyoncé & Jay Z, Ed Sheeran, the Rolling Stones, the Eagles, Bruce Springsteen and the E-Street Band, Green Day and Billy Joel. It also was the site of the 2018 Rugby World Cup Sevens.

Off the field, the Giants have one of the premier community outreach programs in professional sports. Through its community outreach programs, the Giants and the Giants Community Fund work with corporate and non-profit partners to raise awareness, educate and generate interest in a variety of issues important to both their fans and community including education/literacy, violence prevention, health and youth recreation and fitness. For more information visit www.mlb.com/giants