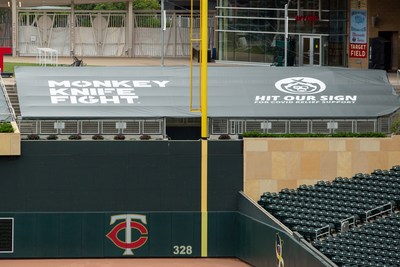 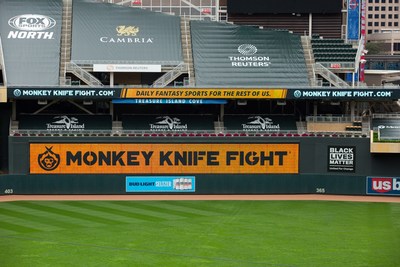 As part of the partnership, Monkey Knife Fight and the Minnesota Twins have installed a tarp located behind the right field foul pole, half in fair territory and half in foul territory. For every player that hits the tarp, MKF will donate $10,000 to the Minnesota Twins Community Fund's Emergency Relief Fund. Regardless of which team hits the tarp or if the hit is fair or foul, MKF will make the donation.

The Monkey Knife Fight tarp, which will remain up throughout the season and during playoffs, will be ready for its first game tonight when the Twins take on the Royals.

"We are proud to work with an organization like the Twins that make the community a priority," said Bill Asher, founder and CEO of Monkey Knife Fight. "Bigger than sports is the responsibility to help feed and shelter those in need who are greatly impacted by the pandemic in Minnesota."

"This spring, the Twins Community Fund created an Emergency Relief Fund to support COVID-relief efforts around child and family hunger, shelter, and educational needs," said Stephanie Johnson, Executive Director of the Minnesota Twins Community Fund. "Monkey Knife Fight's support of these efforts will allow us to continue to assist our community in the ways that it needs the most."

About the Minnesota TwinsCelebrating their 60th season in 2020, the Minnesota Twins are a Major League Baseball team competing in the Central Division of the American League. The franchise has been a staple of the Minnesota sports and philanthropy scene since moving to the state in 1961. In addition to two World Series titles (1987 and 1991), the Twins have won 11 Division Championships (1969, 1987, 1970, 1991, 2002, 2003, 2004, 2006, 2009, 2010 and 2019) and three American League pennants (1965, 1987 and 1991). Since 2010, the Twins have played their home games at the award-winning Target Field in downtown Minneapolis. The Minnesota Twins Community Fund donates more than $1 million annually to benefit youth baseball and softball across Twins Territory, while the MTCF Emergency Relief Fund supports relief efforts around child and family insecurity, shelter and education. For additional information on the Minnesota Twins, please visit: twinsbaseball.com.