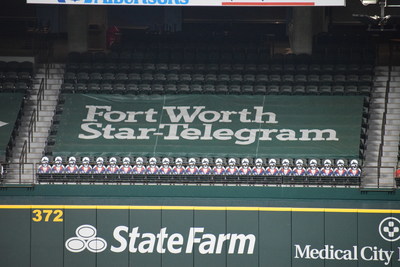 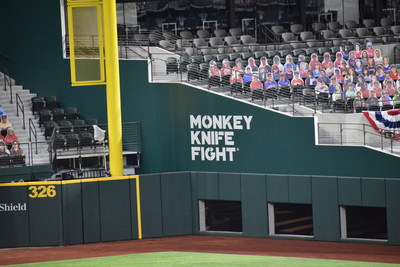 Monkey Knife Fight is placing cutouts of their logo, Furious George, in the left field seating area of the Rangers' new ballpark, Globe Life Field. Each time a ball from either the Rangers or the opposing team hits one of the cutouts, MKF will donate $10,000 to the Texas Rangers Baseball Foundation, with no limit. The foundation has focused its resources on COVID-19 relief the past few months. MKF will donate at least $50,000 to the foundation regardless if any players hit the section.

"The Texas Rangers is an outstanding organization, and we are proud to partner with them," said Bill Asher, Founder and CEO of Monkey Knife Fight. "It's important to our company that we give to those struggling in Dallas-Fort Worth, and the Rangers Baseball Foundation provides what is most needed in the community."

"The Texas Rangers are happy to welcome Monkey Knife Fight to our family of partners," said Jim Cochrane, SVP of Partnerships for the Texas Rangers. "Daily Fantasy Sports is popular amongst our fan base and we are proud to partner with the fastest-growing Daily Fantasy Platform.  We also look forward to raising money through this partnership to help with COVID-19 relief."

Monkey Knife Fight Is Sixth Most-Searched Brand In Sports And...