NEW YORK, April 29, 2018 /PRNewswire/ -- Mr. Ronald S. Lauder on Sunday urged Israel to forge closer bonds with the next generation of the Jewish diaspora. Speaking to an audience of American and Israeli leaders in politics, business, and media at the 7th annual Jerusalem Post conference, Mr. Lauder argued Israel was at a crossroads in terms of its ability to be a major global player, and encouraged the country not to fall behind by educating and welcoming non-orthodox members of the faith. 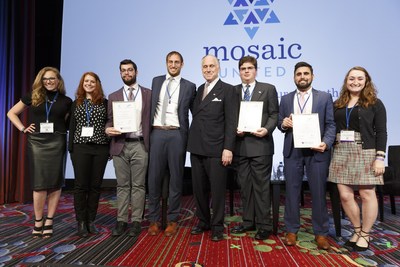 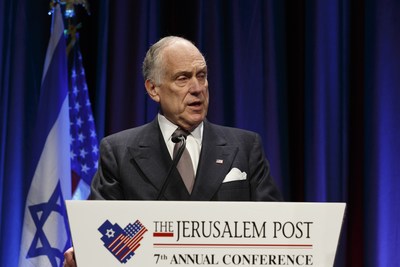 "We need to remember that we are one people," said Mr. Ronald S. Lauder. "From the most Orthodox to the most secular, from the most liberal to the most conservative, we are brothers and sisters united by a common goal: the survival and prosperity of Israel and the Jewish people."

Mr. Lauder has served as President of the World Jewish Congress since 2007. This year marked the third that he has chaired the Jerusalem Post conference.

The full text of Mr. Lauder's speech as prepared is below:

As some of you know, ten teenage Israelis,  bright young kids preparing to serve in the Army, with their entire lives ahead of them, perished on Thursday, taken from us by flash floods in the south of Israel. On the screen behind me are photos of the ten victims. I'd like to read each of their names, and then I ask you to join me in a moment of silence.

Thank you. May their memory be a blessing.

It's an honor to serve as president of this conference for the third year in a row. Thank you, Eli Azur, for putting together such an impressive event. Today we have some great speakers, and I know we all look forward to hearing from them. We're joined today by top Israeli ministers: Avigdor Liberman, Israel Katz, Yoav Gallant, Gila Gamliel, and Tzachi Hanegbi. We have a former Prime Minister, Ehud Olmert. We also have former Minister of Education Gideon Saar.

We have one of the most respected Republican Senators, Lindsey Graham, a great supporter of the Jewish state. And we have the great Democratic Senator Ben Cardin, who has shown tremendous leadership in the fight against BDS.

We have ambassadors, academics, business leaders—including my great friend Charles Bronfman, who has devoted his life to strengthening ties between Israel and the Diaspora. It's truly a remarkable group.

A couple of weeks ago, we celebrated Israel's 70th birthday. Across Eretz Yisrael, from Haifa to Be'ersheba to Eilat streets were lined with blue and white flags, there was singing and dancing, as we toasted Israel's strength and survival. But it was not just a day of joy. It was day of reflection.

Right now, Israel stands at a crossroads. It has two choices: It can continue to be a key power in the Middle East. Or it can become a major global force.

I believe Israel will choose to become a true global player. But before it does, it needs two things: First, it need to change its image. And secondly, it needs allies in every country.

But too many in the younger generation, are turning their backs on Israel. We need to ask ourselves why are they doing that, and what can be done to reverse it?

I believe we're failing the current generation in two ways. The first is education and our failure to tell Israel's true story. We're not doing enough to educate young people about what it means to be Jewish and about the greatness of Israel.

Just this week, one of today's speakers, Ambassador Dani Dayan, was heckled and harassed by BDS protesters while speaking at Syracuse University. That's an outrage. But you know what upsets me even more? In reading about the incident, I saw no mention of anyone standing up to defend Israel. And that's shameful!

Let me ask you a question: Instead of it being a Jewish leader who was harassed, what if it was a Black leader? Or a Muslim leader? Or any minority? Then it would have been front-page news. But when it's a Jew, an Israeli, no one stands up and speaks out. The complicity is frightening. The silence is deafening.

There is no question: we have a double-standard in this country. And we need to end it – once and for all! Incidents like what happened at Syracuse should be a wake-up call. If we don't do something, we risk losing an entire generation of Jews to anti-Israel propaganda and hatred.

And it's not just a problem here in the U.S. As President of the World Jewish Congress, I've been to 40 countries representing 97% of the Jews in the world, and it's the same story in every country.

So, what should we do?

First, Israel needs to devote substantial resources to telling its story. For political reasons, the money that was put aside for Hasbora has been used by other ministries. Imagine if Israel bought one less F-16 plane, and used that money on Hasbora. What a difference that would make!

At the same time that Israel has been spending less and less on public relations, our enemies are spending more and more. They devote millions of dollars to training anti-Israel operatives in the art of persuasion and propaganda. And they send these highly-trained operatives to college campuses to spread lie after lie about Israel, to make Jews look bad, and fan the flames of anti-Semitism. Today, more than ever, they're succeeding. They're convincing our youth that Israel is the pariah state, the evil state, the apartheid state.

What does Israel do in response? Nothing! Do they refute these lies? No! They're silent. They allow our enemies, to define them.

In many ways, the World Jewish Congress serves as Israel's foreign ministry. Which is a good thing, because Israel is probably the only country in the world right now that doesn't have its own foreign minister! Every day, the World Jewish Congress strives to give young people the facts about Israel, not the garbage that fills their Facebook newsfeed. There's only so much we can do on our own! To better reach the younger generation of Jews, we need help. We need help from you! And we need help from Israel.

The second step toward forging a closer bond between Israel and the next generation of Diaspora Jews will require Israel to rethink what it means to be Jewish.

When Herzl dreamed of a Jewish state, he never imagined the kind of religious monopoly that exists today in Israel. Today, the ultra-Orthodox dominate Israel's politics. I know they believe they're doing what needs to be done to protect the Jewish religion. And I commend them for that. However, what they're really doing is alienating a whole generation of young, secular Jews.

I met last week with a father of four who's been married for 25 years. His wife converted before they got married, but they were living in the Midwest at that time, and there wasn't an Orthodox rabbi to do the conversion. So, his wife studied under a Conservative rabbi for six months, and she became Jewish. They built a Jewish home together. They observe the Jewish holidays together. They're proud of their Jewish identity. And their children are even more proud! But the man learned that, in Israel, his four kids, his wife—are not considered Jewish. He was heartbroken. He loves Israel, but he doesn't feel wanted there.

I hear stories like this over and over again.

Instead of pushing these Jews away, we need to bring them in. We need to remember that we are one people. From the most Orthodox to the most secular, from the most liberal to the most conservative, we are brothers and sisters united by a common goal: the survival and prosperity of Israel and the Jewish people.

I'm an optimist. I've met with leaders across the region, and around the world. And I believe Israel's best days are ahead. And with the most pro-Israel president in American history, Donald J. Trump, I believe that peace is possible and within reach. And we all thank President Trump for his historic courage in moving the American embassy to Jerusalem.

I'd like to close by playing you a short video. In the 35 schools I run in Central and Eastern Europe, we've educated 35,000 students over the past 30 years. The students range from semi-secular to modern Orthodox. But in the video you're about to watch, you won't be able to tell the difference. What you'll see is a common sense of pride in these children's faces. That's the pride we must instill in all Jews, all across the Diaspora.

And now, let me play you a love song called Hatikva. Please rise.

My dream is that one day, every Jewish kid everywhere in the world, will know the words to that beautiful song.

For a video of the speech, please visit http://bit.ly/2JBYOxW