WASHINGTON, June 20, 2019 /PRNewswire/ -- A new scientific paper released today in the journal Diseases of Aquatic Organisms reports on the causes of 70 North Atlantic right whale mortalities recorded within the 16-year time period between 2003 and 2018. The research was the product of a retrospective review led by Dr. Sarah Sharp, veterinarian with the International Fund for Animal Welfare (IFAW) who worked with a multi-agency team of 18 veterinarians, biologists, and pathologists to complete the study. 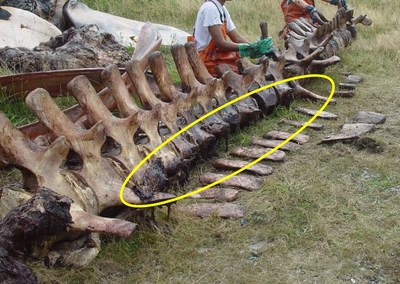 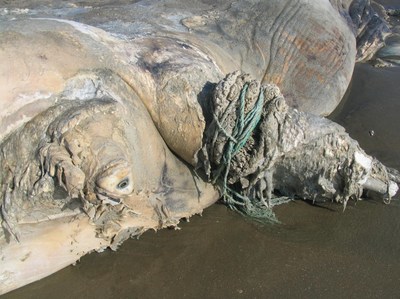 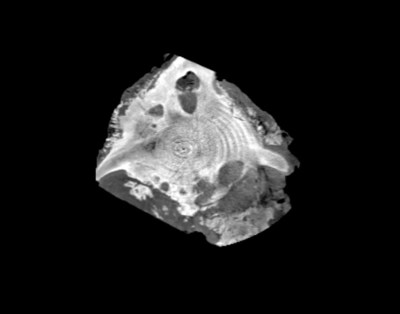 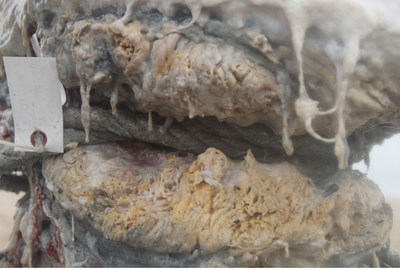 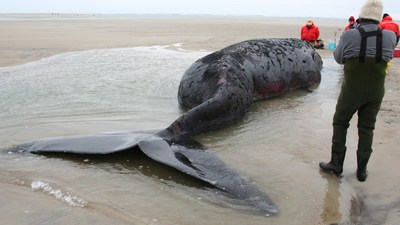 Out of a total of 70 whales, the cause of death was definitively determined for 43. Of those 43 right whales, nearly 90% died as a direct result of human-induced trauma resulting from entanglement in line and vessel collisions.

Entanglement caused immediate, traumatic drowning events in some cases and prolonged, painful deaths in others as a result of constrictive wraps of line. Further examination across studies dating back to 1970 showed that entanglement deaths increased from 21% to 51%, despite mitigation efforts. Wrapping around the whale's flippers, tail, head, or mouth, entangling line was responsible for deep lacerations, and even partial amputations of the flippers, often leading to emaciation resulting from an inability to feed properly. Vessel collisions also caused fatal trauma in right whales, including skull, jaw and vertebral fractures, severe blood loss, and deep chop wounds into muscle, body cavities, organs, and bone.

The North Atlantic right whale once migrated through much of the North Atlantic, but is now found mostly in waters along the coastline between Florida and the Gulf of St. Lawrence in Eastern Canada. As this is one of the oceans' most industrialized corridors, the lethal threats posed by both entanglements and marine vessel collisions are especially concerning given that only approximately 411 North Atlantic right whales remain in the world today. Though commercial whaling for the right whale was banned in 1935, entanglement and vessel collisions have continued to drive the decline of the right whale population. Thus, diagnosing the causes of death is critical to creating focused management actions that can reverse what is happening to this critically endangered species of whale.

According to Dr. Sarah Sharp of IFAW, "Of all the causes identified, it is critical to emphasize that no adult or juvenile North Atlantic right whale deaths were a result of natural causes. Not one. This is clear evidence that these animals are unable to live full, productive lives because they are dying prematurely as the result of human activities. The high number of deaths documented over the past 16 years is not sustainable for this small population. The good news however, is that these mortalities are preventable if targeted and aggressive mitigation measures are enacted immediately by both the United States and Canada."

Tonya Wimmer, Canadian investigator of the Marine Animal Response Society in Nova Scotia, explains that "an unusual mortality event in 2017 in both US and Canadian waters contributed 17 cases to the data set for this report. If we are going to engage in a fundamental effort to save this species, it is critical that organizations continue collaborating to understand exactly what the drivers of such events are in order to avoid future right whale mortalities."

Based on the results of its findings, the paper offered key recommendations, which included:

Sharp concludes that "with a population this small and declining birth rates, the loss of even one individual represents a major blow to the recovery of the species as a whole. The data tell a very compelling story, one which we need to turn around now to bring the species back from the brink of extinction."

About The International Fund for Animal Welfare (IFAW):The International Fund for Animal Welfare (IFAW) is a global non-profit helping animals and people thrive together. We are experts and everyday people, working across seas, oceans, and in more than 40 countries around the world. We rescue, rehabilitate, and release animals, and we restore and protect their natural habitats. The problems we're up against are urgent and complicated. To solve them, we match fresh thinking with bold action. We partner with local communities, governments, non-governmental organizations, and businesses. Together, we pioneer new and innovative ways to help all species flourish. See how at ifaw.org.

About The Woods Hole Oceanographic Institution:The Woods Hole Oceanographic Institution is a private, non-profit organization on Cape Cod, Mass., dedicated to marine research, engineering, and higher education. Established in 1930 on a recommendation from the National Academy of Sciences, its primary mission is to understand the ocean and its interaction with the Earth as a whole, and to communicate a basic understanding of the ocean's role in the changing global environment. For more information, please visit www.whoi.edu.

About The National Oceanic and Atmospheric Administration: NOAA's mission is to understand and predict changes in the Earth's environment, from the depths of the ocean to the surface of the sun, and to conserve and manage our coastal and marine resources. Join us on Twitter, Facebook, Instagram and our other social media channels.