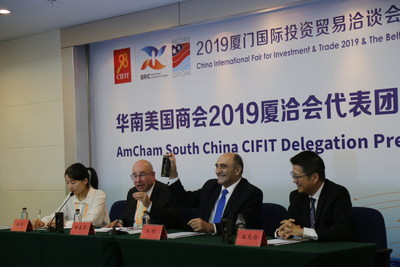 In the afternoon today, AmCham South China will co-host a Medical and Healthcare Roundtable for Multinational Companies with related governmental departments of Fujian Province and Xiamen Municipality in order to strengthen positive and effective communication between member companies and the government. In addition, the delegation will also meet with many government leaders including senior officials from Hebei Province, Shanxi Province, Yunnan Province, and Fujian Province's Fuzhou City and Longyan City to explore business and other opportunities for cooperation at this three-day event.

Dr. Seyedin explained that CIFIT has been the global window for cross-border investment and represents the most influential platform for investment and trade in the world. He also announced that the many projects being signed at CIFIT this year include 9 Rivers Distillery's multi-year RMB150 million commitment to build a factory in Xinluo, Longyan City of Fujian Province bringing jobs and growth to rural Fujian. The project was made possible with support and help of AmCham South China and related governmental agencies of Fujian Province. 9 Rivers Distillery is a U.S.-International joint venture project, which will be the first wholly foreign-owned distillery in China to craft spirits across all categories, including vodka, gin, rum, liqueurs and good old American whiskies of many varieties.

"Our Chamber and members have returned here for consecutive 17 years. We owe the success of our delegation every year to the excellent organization and the high quality of arrangement and service provided by the CIFIT Organizing Committee. I want to offer my congratulations to MOFCOM, Xiamen and Fujian leaders, and the CIFIT Organizing Committee for undertaking and delivering the high level of professional excellence that keeps drawing us back to the beautiful city of Xiamen every year,­" Dr. Seyedin said.

Dr. Seyedin stressed that AmCham South China supports Washington and Beijing's ongoing efforts to deal with the bilateral trade practices and policies through friendly, mutual, continuous, constructive and goal-orientated dialogues and negotiations. He called on prompt actions by both governments to end the trade dispute and mitigate harms to all stakeholders.

The American Chamber of Commerce in South China (AmCham South China) is a non-partisan, non-profit organization dedicated to facilitating bilateral trade between the United States and the People's Republic of China. Certified in 1995 by its parent organization, the U.S. Chamber of Commerce in Washington, D.C., AmCham South China represents more than 2,300 corporate and individual members, is governed by a fully-independent Board of Governors elected from its membership, and provides dynamic, on-the-ground support for American and International companies doing business in South China. In 2018, AmCham South China hosted nearly 10,000 business executives, government leaders and journalists from around the world at its briefings, seminars, committee meetings and social gatherings.