NEW YORK, March 12, 2020 /PRNewswire/ -- Today, March 12, is World Kidney Day, and the National Kidney Foundation (NKF) would like you to observe the occasion by dedicating one minute of your day to take the Kidney Risk Quiz. In just 60 seconds, you can find out if you are the 1 in 3 American adults at risk for developing kidney disease and learn what to do next to address your kidney health. 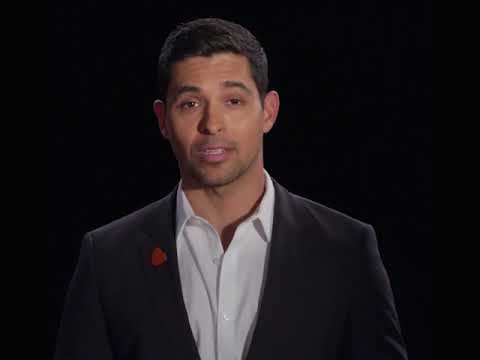 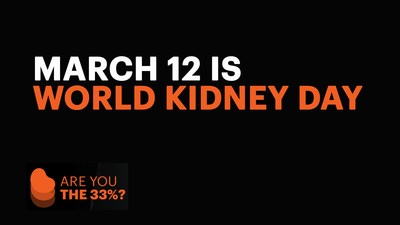 Leading to today's World Kidney Day observances, NKF kicked off National Kidney Month on March 1st by launching "Are You the 33%?"—NKF's newest public awareness campaign which focuses on the 33 percent of American adults at risk for developing dangerous, life-threatening kidney disease. Risk factors include diabetes, heart disease, high blood pressure, obesity and family history of kidney disease.  However, kidney disease often has no symptoms and those afflicted won't know they have it until these vital organs stop working. When kidneys fail, dialysis or a kidney transplant is needed to survive.

"Today we observe World Kidney Day, a day that calls attention to the importance of kidneys, as well as reducing the impact of kidney disease globally," said Kevin Longino, Chief Executive Officer, NKF and a kidney transplant patient. "One day, instead of just observing this day, I hope to celebrate it because preventable kidney disease has been eradicated. Until then, we have a public health crisis and early detection is key to improving patient outcomes. NKF will continue to find ways to reach the public to raise awareness about kidney health, slow or stop the progression of kidney disease, and serve as a voice for patients and organ donors within our government."

The first step to preventing kidney failure is knowing your risk by taking the quiz. If it shows you may be at risk, two simple tests, one blood and one urine, can let your doctor know how your kidneys are doing. It's easy to get tested and the results can save your life. Starting in May people with diabetes, and those with both diabetes and high blood pressure, who complete the quiz and are at risk will be able to receive a complimentary at-home urine test kit sent by mail. For more information, please visit MinuteForYourKidneys.org.

The "Are You the 33%" campaign microsite, public service announcement and all creative assets will also be available in Spanish starting September 15th for National Hispanic Heritage Month.

This nationwide public awareness campaign was developed by creative agency Berlin Cameron, which has worked with NKF since 2016. In previous years, Berlin Cameron has helped evolve the foundation's branding as well as created notable campaigns, including "Heart Your Kidneys" to remind the world that kidneys are just as important as every other vital organ, and that early detection is key to improving patient outcomes.

NKF would like to thank CVS Kidney Care and Healthy.io for amplifying our call to action to take the quiz and get tested, and our campaign sponsors AstraZeneca, Otsuka America Pharmaceutical, Inc. and Tricida for independent financial support.

About Berlin CameronNew York-based Berlin Cameron is a strategic and creative lead agency that is well known for accelerating the growth of iconic and challenger brands by building their cultural relevance. Owned by WPP, Berlin Cameron has the agility of a small boutique agency with access to the global scale of the much larger WPP. For more, visit http://www.berlincameron.com/ and Twitter, Facebook, and LinkedIn.

COVID-19 Patients are Becoming Kidney Patients but Most Americans ...