SAN DIEGO, Aug. 7, 2020 /PRNewswire/ -- Stellar Solar, one of San Diego's most experienced residential and commercial installers since 1998, has teamed up with NBA Hall of Fame Center, solar advocate and San Diego native and resident Bill Walton to educate San Diego homeowners who have not gone solar on the economic benefits it can provide and inspire them to get a virtual solar quote to gauge what the solar potential of their home is, and how much money they can save every month.

Stellar Solar Vice President of Marketing David Boylan, who connected with Walton to make this partnership happen, loved the fact that besides Walton's athletic accomplishments he is as well known for his interests in philanthropy, music and the environment as he is in sports where he still provides color commentary for Pac-12 basketball games. "From the minute I met Bill his energy and passion for solar was obvious and clearly not some front he was putting on for an endorsement deal. This is as good a fit of product and endorser as it gets, especially given his connection to San Diego and his firm belief that solar should be on as many roofs as possible.  He is a true solar evangelist and I feel that he will raise the awareness of the entire industry in San Diego and we are stoked to be a conduit for that. Being selected by Bill was also a validation of the way Stellar Solar does business, our people, and our consistently winning San Diego's Best Solar in the Union Tribune Readers Poll.  We are excited to work with him and have his voice amplify our message and feel that we have earned the right to be considered by homeowners when they are ready to go solar."

Walton's choice to work with Stellar Solar was a "no-brainer" as he put it. "I've known of Stellar's sustained excellence and success for years, including their incredible streak of winning San Diego's Best seven of the past nine years and three years in a row.  Stellar is synonymous with all the things I believe in, stand for and try to live every day. Stellar's standing in our community, their customer reviews, and the quality and authenticity of their people, product, style, and culture fit seamlessly and perfectly with who I am, what I want to do, and where I want to go in my life. I'm about people, passion, and purpose. I am a team-first guy. We are only as good as our teammates. I want to be the best, and work with the best. Stellar Solar is stellar across the board on all fronts. Stellar Solar has a tremendous team - the type of team that I dream of being a part of. Stellar represents the conquest of substance, quality and achievement over hype and gimmicks.  They are about collaborating, empowerment, enabling, and educating our community about the value, sensibility, importance, and superior economics of solar energy. I am proud, honored and grateful to be a part of such a special team. Stellar Solar - this is a cosmic harmonic convergence of the highest order. And what a spectacular platform for me to become stellar, and to power success in every aspect of my life."

About Stellar SolarStellar Solar is a leading California residential and commercial PV solar design and installation company, based in San Diego since 1998 with over 10,000+ installations across Southern California including notable commercial installations of nearly 50MW that include The Salk Institute, US Foods, Cedars Sinai Hospital and more. Readers of the San Diego Union Tribune have voted them best solar panel company again in 2019 marking the third year in a row and seventh time in nine years winning the award.  Their 5 Star Reviews on Yelp, A+ rating with the Better Business Bureau and high customer ratings on Angie's list are further testament to their standing as the leading solar provider to homes, businesses, nonprofits and faith based organizations in San Diego County and Orange County. Learn more at www.stellarsolar.net

About Bill WaltonBill Walton was born in downtown San Diego and raised in La Mesa, California, where his mom Gloria, still lives.  He exploded on the international basketball scene while attending Helix High School and went to UCLA as a scholarship player for John Wooden, winning three successive NCAA Player of the Year awards and helping UCLA to consecutive undefeated NCAA Championships (1972, 1973), and a record 88-game winning streak. Bill is a member of the NCAA All Time Basketball Team. He was selected as the #1 overall pick in the 1974 NBA Draft by the Portland Trailblazers who won the NBA Championship in 1977, earning Bill the NBA Finals MVP award that season. He was the NBA MVP the next season. Bill won another NBA title, playing with the Boston Celtics in 1986.  Bill is a member of the NBA All Time Team and was inducted into the Basketball Hall of Fame in 1993.

When Bill could no longer play basketball, he started a most unlikely career as a multimedia broadcaster, a career that has now spanned 30 years working for every major network and platform, and has been with ESPN for many years now and is a multi-time Emmy Award winning on-air talent. He is a New York Times Best Selling author, with his memoir, "Back From The Dead."  He is a huge music fan, and with his wife Lori, travels and has toured extensively with his favorite bands, including the Grateful Dead.

He is active in many philanthropic endeavors, and most recently co-founded the global initiative Bike For Humanity, a virtual biking fundraiser for nonprofits that benefit children.

Walton is a long-term advocate for clean energy and does his part by powering his home with solar, collecting rainwater, driving electric vehicles, and representing solar companies as a solar evangelist. He is an active board member of CleanTech San Diego.

Bill and Lori have 6 children and 14 grandchildren. 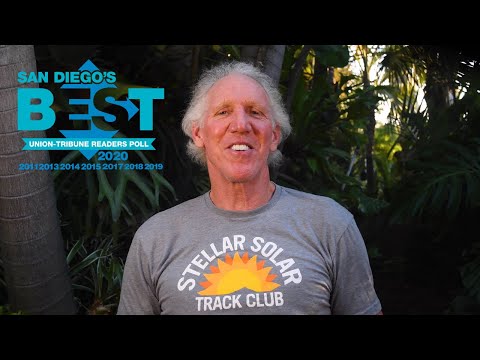