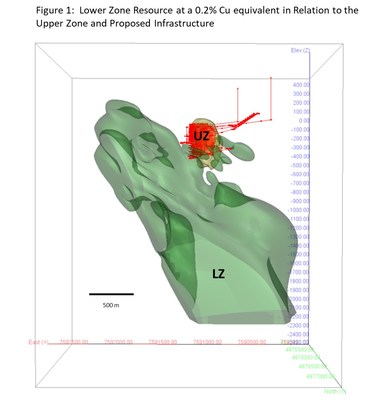 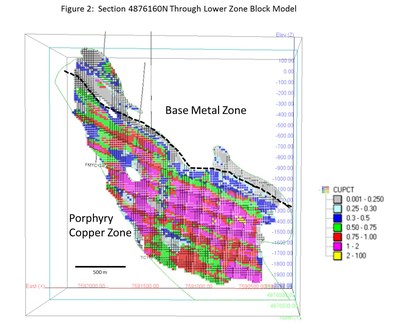 Nevsun's CEO, Peter Kukielski, said "The Timok Lower Zone ranks high among world porphyry deposits by tonnage and by grade.  With 1.1 billion tonnes grading 1.11% copper equivalent, the Timok Lower Zone benchmarks well against planned and operating block cave mines. We will continue to work with Freeport to determine next steps for advancing the Lower Zone."

Mr. Kukielski went on to comment, "We expect that Timok (Cukaru Peki) is the start of a new generation of mines in Serbia's Bor region.  The Lower Zone remains open to the north and at depth. There are multiple high grade Upper Zone style exploration targets above the Lower Zone and our exploration licenses have the potential to host entirely new porphyry systems with associated high grade Upper Zone style mineralization."

The Lower Zone at Timok consists of two distinct mineralization styles: first a typical porphyry copper style mineralization characterized by potassic alteration and chalcopyrite with elevated molybdenum, and second a high sulphidation style mineralization consisting of sericitic alteration with elevated arsenic and base metals (lead, zinc and bismuth). The porphyry copper mineralization is by far the most important volumetrically at over 95% of the volume at the lower cut-off.  The mineralized envelope extends above the Upper Zone on the east side with elevations ranging from approximately 500 meters below surface to just over 2,200 meters below surface.  See Figure 1 for deposit configuration and Figure 2 for a visual representation of the mineralized zones.

The mineral resource model includes the data from the recently completed $20 million drill program and has an effective date of June 19, 2018.  Modelling, resource estimation and tabulation were completed by Dr. Gilles Arseneau of SRK Canada.  The deposit was modelled using LeapFrog and a 0.2% copper equivalent cut off using 102 drill holes and 14,592 assays.  Results are tabulated using a dollar equivalent using US$3.00 a pound for copper and US$1,400 an ounce for gold, with recoveries of 87% for copper and 69% for gold in the porphyry copper zone based on initial test work performed on representative samples.  The mining method is assumed to be by block cave.

The mineral resources were estimated using ordinary kriging and multiple passes with increasing search radii from 75 metres up to 250 metres and required at least two drill holes within the search volume to estimate a block grade. A final pass was used to infill any un-estimated blocks that were within 50 metres of holes within the 0.2% copper grade shell.

All estimated blocks were classified as inferred mineral resources due to wide-spaced drilling and the lack of any inclined drill holes.

The Company uses the terms "mineral resources", and "inferred mineral resources". While those terms are recognized by Canadian securities regulatory authorities, they are not recognized by the United States Securities and Exchange Commission (the "SEC") and the SEC does not permit U.S. companies to disclose resources in their filings with the SEC.

The above contains forward-looking statements or forward-looking information within the meaning of the United States Private Securities Litigation Reform Act of 1995, and applicable Canadian securities laws. All statements, other than statements of historical facts, are forward looking statements including statements with respect to the Timok Project in Serbia (the "Timok Project"). Forward-looking statements include, but are not limited to, estimates of mineral grades and recovery rates; the results of future interpretation of scientific and technical information; the Timok Project's world ranking as a porphyry deposit; future exploration in the Timok Project and the potential for new porphyry systems in the Timok Project; and the development of mines in Serbia's Bor region. Forward-looking statements are frequently, but not always, identified by words such as "expects", "anticipates", "believes", "hopes", "intends", "estimated", "potential", "possible" and similar expressions, or statements that events, conditions or results "will", "may", "could" or "should" occur or be achieved. Forward-looking statements are statements concerning the Company's current beliefs, plans, objectives and expectations about the future. The actual achievements of the Company or other future events or conditions may differ materially from those reflected in the forward-looking statements due to a variety of risks, uncertainties and other factors. These risks, uncertainties and factors include general business, legal, economic, competitive, political, regulatory and social uncertainties; actual results of exploration activities and economic evaluations; fluctuations in currency exchange rates; changes in project parameters; changes in costs, including labour, infrastructure, operating and production costs; future prices of copper, gold, zinc, silver and other minerals; resource estimates and variations of mineral grade or recovery rates; operating or technical difficulties in connection with exploration; land acquisition; mining method, production profile and mine plan; other development or mining activities, including the failure of plant, equipment or processes to operate as anticipated; performance on ore production and waste movement and improvement in mining capability; delays in exploration, development and construction activities including commencement of the decline construction as planned; changes in government legislation and regulation; the ability to maintain and renew existing licenses and permits and the ability to obtain other required licences and permits in a timely manner or at all; the ability to obtain financing on acceptable terms and in a timely manner or at all; contests over title to properties; employee relations and shortages of skilled personnel and contractors; the speculative nature of, and the risks involved in, the exploration, development and mining business including, without limitation, other risks that are more fully described in the Company's Annual Information Form for the fiscal year ended December 31, 2017 (the "AIF") and the Company's management discussion and analysis for the fiscal year ended December 31, 2017 (the "MD&A"), which are incorporated herein by reference.

Further information concerning risks and uncertainties associated with these forward-looking statements and our business can be found in our AIF and MD&A, which is available on the Company's website (www.nevsun.com), filed under our profile on SEDAR (www.sedar.com) and on EDGAR (www.sec.gov) under cover of Form 40-F.

Nevsun Resources Ltd. is the 100% owner of the high-grade copper-gold Timok Upper Zone and 60.4% owner of the Timok Lower Zone in Serbia. The Timok Lower Zone is a joint venture with Freeport-McMoRan Exploration Corporation ("Freeport") which currently owns 39.6% and upon completion of any feasibility study (on the Upper or Lower Zone), Nevsun Resources Ltd. will own 46% and Freeport will own 54%. Nevsun generates cash flow from its 60% owned copper-zinc Bisha Mine in Eritrea.  Nevsun is well positioned with a strong debt-free balance sheet to grow shareholder value through advancing Timok to production.