NEW YORK, June 6, 2017 /PRNewswire-USNewswire/ -- On the eve of World Ocean's Day, Comics Uniting Nations will introduce a brand new comic and character into it's series of fun and educational comics that are bringing the Sustainable Development Goals to the next generation. Through the new title Annie Sunbeam and Friends: Protecting Life Below Water, the comic partnership will tackle environmental concerns for oceans, marine protection and restoration. 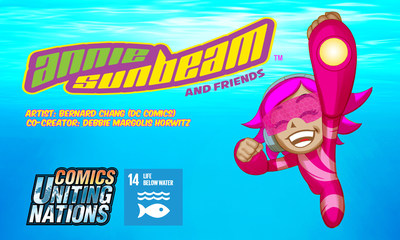 Annie Sunbeam™ is the heroic leader of the intergalactic, cross-species Solution to Pollution Crew™. In the comic, Annie decides to travel to earth in her Space Cab for a nice vacation. Her plan is quickly interrupted when she observes the harmful behavior of humans towards the environment, oceans, rivers and streams. Soon, her vacation turns investigation as she uncovers the mind-controlling daze which is causing people to harm their own planet.

"They have no idea how they are hurting themselves and the environment." Annie shakes her head at human behavior as she and the Solution to Pollution Crew observe debris-littered mangroves, plastic-trapped dolphins and acid-damaged reefs. However, the core message of the comic is unmistakably positive: when humans are no longer afflicted by the "daze" of environmental ambivalence, their behavior changes and good things happen for our oceans and waters.

Annie Sunbeam™ and her friends are illustrated by famed DC Comics artist Bernard Chang (Batman, Superman, Wonder Woman) and co-written by Debbie Margolis Horwitz, Jill Schneider and Bernard Chang. Through the popular and accessible medium of comics, this 10-page comic will be made available for free download and help young people worldwide understand the importance of protecting life under water.

As the first Comics Uniting Nations volume to address SDG 14, Annie Sunbeam and Friends™ aligns with the United Nations Ocean Conference's effort to communicate and cooperate more broadly on life below water, to promote and protect the health of our oceans.

"If we could see the Earth and its Oceans through Annie's eyes, wouldn't we all want to do whatever was necessary to preserve its grandeur and existence?  We are thrilled to partner with Comics Uniting Nations in encouraging future change makers to become members of Annie's Solution to Pollution crew!" said Debbie Margolis Horwitz; Co-Creator and Executive Producer of Annie Sunbeam and Friends™.

Annie Sunbeam and Friends™ is released tomorrow, and will be presented throughout the United Nations Ocean Conference. It will be revealed at a panel at the "SDG Media Zone" from 3:00-3:30, followed by its official launch during the 4:00-6:00 Activate Talk at UNICEF Headquarters with over 200 children and young people. "Children and young people are increasingly concerned about environmental issues including ocean conservation," says UNICEF Agenda 2030 Partnerships Manager, Shannon O'Shea. "We are excited to bring young change makers together to showcase how the future generation is raising awareness and taking action, which we hope will further be inspired by Annie and her Solution to Pollution Crew." Annie Sunbeam and Friends™ will also be featured in a special one-hour event on June 10 at the Hurleyville Center for the Arts.

For more information about Comics Uniting Nations and for free downloads of the complete Annie Sunbeam and Friends comic and many other comics, visit: www.comicsunitingnations.org.

About Comics Uniting Nations: Comics Uniting Nations is a partnership of UNICEF, The World's Largest Lesson, and NGOs PCI Media Impact and Reading with Pictures. It aims to make the Sustainable Development Goals accessible to the citizens of the world of all ages through comics. Working with a wide array of artists and content creators, Comics Uniting Nations leverages the universal visual language and transformative power of comics to educate people about the SDGs and empower them to create positive and lasting change in their own communities and worldwide: www.comicsunitingnations.org