MADISON, Wis., June 16, 2021 /PRNewswire/ -- Despite challenges presented by the COVID-19 pandemic and resulting recession, the middle class is displaying heightened optimism and confidence in their financial security and retirement prospects – even though their savings remain strained, according to new survey data from CUNA Mutual Group. 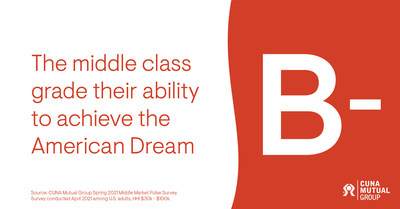 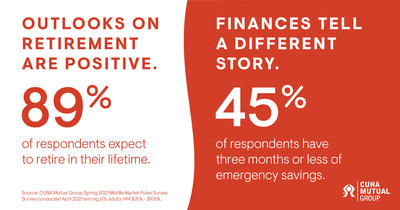 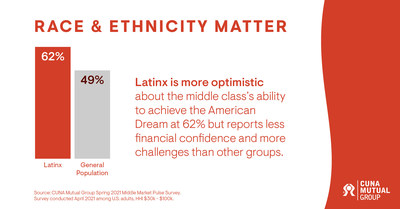 Additionally, respondents revealed that although the COVID-19 pandemic had doled out a notable hit, the impact was perhaps not as much as anticipated a year ago:

Importantly, however, even though the middle class is feeling more financially secure, their personal safety nets still tell a different story. Nearly half (45%) have only three months or less of emergency savings, which is in line with May 2020 (47%).

"While it's encouraging to see rising optimism among the middle class, especially after a year of unprecedented loss and financial difficulty, it's apparent that the gap between awareness and preparedness is growing only starker," said Paul Chong, senior vice president, CUNA Mutual Group. "This further underscores that the retirement crisis is still very real and stands to worsen coming out of the pandemic. I It's more important than ever for the financial services industry to focus on how to better address the long-term planning needs of all hardworking Americans."

Reality bites, or the kids are alright?

Data also showed that Gen X was consistently more skeptical than other generational groups about their own financial prospects – but also on how much the pandemic has set them back – while the opposite phenomenon was reported by Gen Z. Specifically:

The Latinx middle class – particularly Latinx women – are more optimistic about the middle class's ability to achieve the American Dream, but report less financial confidence and more challenges than other groups as a result of the COVID-19 pandemic. Of note:

"The disparities we're seeing among from the Latinx middle class on key indicators of financial stability is concerning, though unfortunately, not surprising given how widespread economic inequality has been – and continues to be – for communities of color," said Steve Rick, chief economist, CUNA Mutual Group. "Especially given how impacted the Latinx community has been by the COVID-19 pandemic, it is absolutely paramount that steps are taken holistically across our economy to not only bridge the K-shaped recovery that has started to emerge, but to ensure more equitable access to financial security for all in the future."

Built on the principle of "people helping people," CUNA Mutual Group is a financially strong insurance, investment and financial services company that believes a brighter financial future should be accessible to everyone. Through our company culture, community engagement, and products and solutions, we are working to create a more equitable financial system that helps to improve the lives of those we serve and our society. For more information, visit www.cunamutual.com.