ATLANTIC CITY, N.J., Nov. 17, 2021 /PRNewswire/ -- New Jersey's online and retail sportsbooks set another U.S. record by handling $1.3 billion in wagers in October, which led to record revenue, too. Meanwhile, online casinos posted another record month, which made New Jersey along with Pennsylvania the first states to generate $1 billion in annual gross revenue from online casino betting, according to PlayNJ, which tracks gaming developments in the state.

"Five weekends in October meant an unusual amount of NFL and college football to bet on, and plenty of free time for gamblers to visit Atlantic City, making fresh records inevitable," said David Danzis, an analyst for PlayNJ.com. "But what will have a longer-lasting effect is if the market for sports betting and online gambling continues to expand while Atlantic City continues to recover following the pandemic. That combination is producing some jaw-dropping results."

New Jersey's online and retail sportsbooks drew $1.3 billion in bets in October, easily topping September's record handle of $1.01 billion by 28.9%, according to official reporting released Wednesday. October's betting volume was up 62.3% from the $803.1 million generated in October 2020.

Five full weekends of NFL and college football were a boon for sportsbooks, boosting football betting to $499.0 million in October from $400.8 million in September. The start of the NBA season helped pour another $156.9 million into sportsbooks.

"With so much to bet on in October, state records for wagering are falling in every major legal sports betting market in the U.S.," said Eric Ramsey, an analyst for the PlayUSA.com Network, which includes PlayNJ.com. "New Jersey separates itself because bettor enthusiasm for the NBA outstrips most every other market, which pushes its ceiling during a month like October to heights that were once unreachable in the U.S."

Online sportsbooks took in $1.2 billion in wagers, accounting for 90.5% of the state's handle in October. FanDuel/PointsBet/SuperBook continued their dominance of the online market with $39.6 million in gross revenue, up from $36.6 million in September.

Retail sportsbooks set a record, too, with $124.2 million in October, up from $92.7 million in wagers in September. Meadowlands/FanDuel led the retail market with $4.5 million in revenue.

"More than just a growing base of bettors, online sportsbooks are expanding their reach with in-game betting and prop bets," Ramsey said. "The result is that bettors are placing more wagers as they become more comfortable with that kind of action."

New Jersey joined Pennsylvania as the first U.S. states to take in more than $1 billion in gross gaming revenue from online casinos and poker rooms in a single year with a record $127.0 million in October. That topped the previous record of $122.6 million set just last month, and was up 35.9% from $93.5 million in October 2020.

"The rise in revenue in all forms shows that each pillar of the state's gaming industry is benefiting from a rising tide," Danzis said. "Online gambling has continued to grow since launch, but annual revenue has more than tripled since sports betting launched in 2018. As impressive as $1.1 billion in revenue in 10 months is, it might not have gotten there so soon without the legalization of online sports betting."

Borgata/BetMGM led the market with $38.8 million in casino and poker revenue in October. Rival Golden Nugget was second with $34.5 million in revenue.

About the PlayUSA.com Network:

The PlayUSA.com Network and its state-focused branches is a leading source for news, analysis, and research related to the market for regulated online gaming in the U.S. 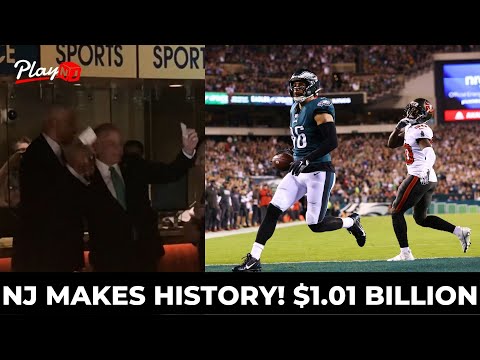 New Jersey First to Generate $1 Billion In Sports Wagers in...