In a world-first, the report reveals that an estimated 98m people use these products globally: 68m vapers, 20m using heated tobacco products and 10m using US smokeless or pasteurised oral snus – showing the huge demand for safer alternatives. 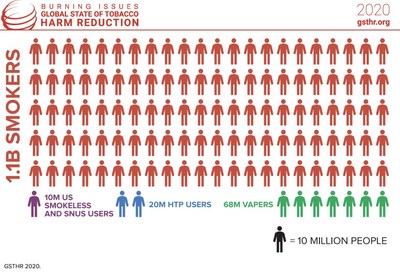 However, these numbers are dwarfed by the global total of 1.1 billion smokers – a figure that has remained static for two decades despite billions spent on tobacco control. Eight million people die due to smoking-related disease every year.

At today's open-access online launch, co-hosted with Lilongwe-based NGO THR Malawi, the report authors show that both access to and adoption of safer nicotine products largely remains the preserve of higher income countries, while 80 per cent of the world's smokers live in low and middle income countries poorly equipped to implement tobacco control or treat smoking-related disease.

The report uncovers how tobacco control policy at the WHO is being influenced by billions of dollars from US foundations campaigning against tobacco harm reduction, while misinformation is discouraging smokers from switching to safer products.

The GSTHR's live data mapping resource, launched alongside Burning Issues, demonstrates that safer nicotine products are being banned or left dangerously unregulated in many countries – while deadly combustible tobacco is banned only in Bhutan.

Burning Issues Executive Editor Harry Shapiro agrees. "Tobacco harm reduction could and should become a genuine consumer-led public health success. Instead, we're seeing the start of a war on nicotine."

Guest speaker at today's launch Professor David Nutt, DrugScience founder, argues that to reject the opportunity of tobacco harm reduction "is perhaps the worst example of scientific denial since the Catholic Church banned the works of Copernicus in 1616."