SECAUCUS, N.J., April 9, 2018 /PRNewswire/ -- Despite record high rates of new cases of sexually transmitted diseases (STDs), young women who are sexually active often don't talk to their clinicians about sex and STD risk, and many aren't being tested for infection or disease as guidelines recommend, according to new research from Quest Diagnostics (NYSE: DGX), the world's leading provider of diagnostic information services. 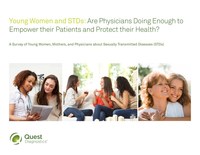 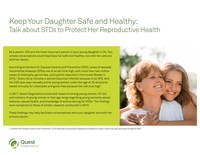 The findings from a new survey suggest that lack of direct communication between clinicians and patients -- and false beliefs about STD risk held by both groups -- may contribute to STD prevalence.

The survey examined the perceptions of young women 15-24 years of age, mothers of young women in this age group, and primary care, OB/GYN, and other specialty physicians regarding sexual activity, sexual health, and knowledge of and screening for STDs (also known as sexually transmitted infections or STIs). The results of the 2017 survey were also compared to those of previous research by Quest in 2015 involving similar populations.

The report, "Young Women and STDs: Are Physicians Doing Enough to Empower their Patients and Protect their Health?," is available online at www.LetsTalkAboutSTDs.com.

Medical guidelines from the Centers for Disease Control and Prevention recommend annual laboratory testing for chlamydia and gonorrhea for all sexually active women under the age of 25. According to the Centers for Disease Control and Prevention (CDC), cases of sexually transmitted disease are at an all-time high, with more than two million cases of chlamydia, gonorrhea and syphilis reported in the United States in 2016. Young adults make up about half of STD cases.

"We know that people often think of STDs as something that happens 'to others' and, frequently, health care providers have similar beliefs and don't view their patients as being at risk," said Lynn Barclay, president and CEO, American Sexual Health Association. "Testing is crucial in young women because STDs are very common, often without symptoms, and undetected infections like chlamydia can lead to problems including infertility."

Among the key findings:

In addition, the survey responses of young women suggest rates of STD screening by clinicians have declined, particularly among those 15-17 years of age. Based on the comparison of responses of sexually active women 15-17 between 2015 and 2017, STD testing by clinicians for chlamydia and gonorrhea has decreased by 9 percent and 11 percent, respectively.

The survey also found gaps in care by some physicians:

Annual screening for chlamydia and gonorrhea for men who do not have sex with other men is not currently guideline recommended, although, like women, they may not have symptoms and can unknowingly transmit infection to a partner. Undiagnosed women are much more likely than men to suffer long-term health impacts from STDs, including infertility and pelvic inflammatory disease.

"Our findings suggest that discomfort with frank conversations about sexual activity and false beliefs about risk are key barriers to STD testing, and could be driving some of the increase in STD cases of young women," said Damian P. Alagia, III, MD, FACOG, FACS, medical director of woman's health, Quest Diagnostics. "Half of all new STD cases are acquired by young people between the ages of 15-24, and one in four sexually active adolescents has a sexually transmitted disease. Our hope in sharing this survey's findings with clinicians and the general public is that it prompts open dialogue about reproductive health and STD risk, which is absolutely critical to reversing the trajectory of high STD rates in the United States."

Research was conducted by Aurora Research & Consulting on behalf of Quest Diagnostics in December, 2017. A total of 4,742 study respondents, comprised of 3,414 young women between the ages of 15-24, of whom 1,500 self-identified as sexually active; 1,016 mothers of young women in that age group; and 312 primary care, OB/GYN and specialty physicians were surveyed. Most clinician survey data presented in this report was of responses of 100 primary care physicians. Each respondent completed 15-30 minute online surveys regarding perceptions and knowledge of STDs and chlamydia and gonorrhea testing. Strengths of the research include the large number of respondents and the research's national scale, while limitations include self-reported data and a lack of direct comparability between study populations. The 2017 research was complemented by results of a survey of similar cohort of patients and healthcare practitioners performed in 2015. For more information, please refer to www.QuestDiagnostics.com.

More information about the methodology can be found at www.LetsTalkAboutSTDs.com

Quest Diagnostics empowers people to take action to improve health outcomes. Derived from the world's largest database of clinical lab results, our diagnostic insights reveal new avenues to identify and treat disease, inspire healthy behaviors and improve health care management. Quest annually serves one in three adult Americans and half the physicians and hospitals in the United States, and our 45,000 employees understand that, in the right hands and with the right context, our diagnostic insights can inspire actions that transform lives. www.QuestDiagnostics.com.