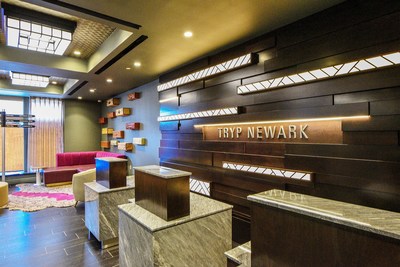 Celebrating the spirit of the urban traveler, TRYP by Wyndham hotels makes it possible for guests to uncover a destination's individual culture. The 101-room TRYP by Wyndham Newark Downtown, developed by East Park Street Hospitality Urban Renewal, Inc., is perched along the Newark Bay, central to historic museums, transportation options, and the famous Branch Brook Park which blooms to life each spring with the largest collection of cherry blossom trees in the country.

"The city of Newark is in the midst of a spirited renewal with an influx of new business, a dynamic culinary scene and a clear passion for art and culture," said Kate Ashton, senior vice president, TRYP by Wyndham. "It's exactly the urban atmosphere where TRYP by Wyndham guests thrive: an up-and-coming destination uncovered by locals, with its own culture, history and unique vibe – making it the perfect next stop for the growing TRYP brand."

An emerging travel destination all on its own, Newark has grown into a vibrant metropolis and cultural hub that extends far beyond its convenient location near New York City. Guests can explore an evolving culinary scene, enjoy entertainment at the nearby Prudential Center or New Jersey Performing Arts Center, or spend the day exploring the Newark Museum, City Without Walls gallery, and more.

Downtown Design The hotel occupies a historic building erected in the 1920s, commemorated through art-deco inspired design. Created by lifestyle design expert and Hotel Impossible star Blanche Garcia, the hotel's interior is an interactive experience celebrating the historic and vibrant city of Newark. Many of the building's historic elements, such as the mosaic tile floor, have been preserved and augmented with modern features.

The hotel celebrates the city of Newark through both art and whimsical design. Guests can find displays of local historic artifacts, scenes from the city, and murals of Newark natives – like Frankie Valli, Queen Latifah, and Shaquille O'Neal – featured on each floor's elevator bank and in subtle designs within the guest rooms. Playful modern touches include Instagram-worthy royal chairs with 3D crowns and an optical illusion mural in the lobby men's room which comes to life only when photographed.

The design also incorporates nods to the commuter culture of the city, with transit-style cartoon wallpaper; a laser-cut grid of the city of Newark; and a deco-style copper leaf art piece highlighting different modes of transport, created by local painter Tim Murphy and framed by HGTV's Shaun Killman. Murphy and Killman created much of the art throughout the hotel including a hand-painted custom ceiling mural (by Murphy) and a human-scale lightbulb (done by Killman) sculpted in honor of Thomas Edison's local roots.

TRYP by Wyndham Makes an Entrance  TRYP by Wyndham Newark Downtown will be the sixth U.S. location for the brand, which recently opened locations in Miami's Bay Harbor and St. Augustine, Fla., and College Station, Texas. The brand's pipeline includes approximately 18 hotels and more than 2,600 rooms in locations like Long Island City, N.Y.; El Paso, Texas; Macon, Georgia; and Pittsburgh, Penn., in addition to multiple destinations in Florida including Coral Gables, Orlando, Kissimmee, Fort Lauderdale and an additional Miami location.

About TRYP by Wyndham  Part of Wyndham Hotel Group, TRYP by Wyndham® represents more than 100 hotels and 17,000 rooms across the world. The brand caters to business and leisure travelers in cosmopolitan cities including Madrid and Barcelona in Spain; Paris, France; Lisbon, Portugal; Frankfurt and Berlin, Germany; Buenos Aires, Argentina; Sao Paulo, Brazil; Brisbane, Australia and New York City, U.S. Powered by the city, the brand celebrates openly displaying passion for the cities in which its hotels are located. Reservations and information are available by visiting www.tryphotels.com.