TORRANCE, Calif., May 20, 2020 /PRNewswire/ -- Acura will reveal the completely new second-generation Acura TLX sport sedan digitally on May 28. Delivering dramatic gains in style and performance, the new TLX will be the quickest, best-handling and most well-appointed sport sedan in Acura history, with the Type S being the model's performance pinnacle. The new TLX will make its public debut in a short film viewable at acura.com/2021-TLX on Thursday, May 28 at 10:00 a.m. PDT. 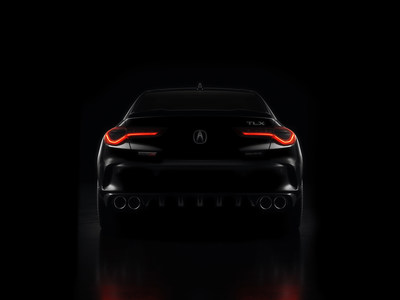 The 2021 TLX is the latest step in Acura's steadfast commitment to bring Precision Crafted Performance to life, as manifested in the second-generation NSX supercar, the third generation RDX, the addition of PMC Edition models produced at the NSX factory, the return of Type S performance variants and a new dedicated 3.0-liter V6 Turbo engine set to debut with the TLX Type S.

Next Generation Acura TLX Set for Digital Debut on May 28