SARASOTA, Fla., Aug. 14, 2018 /PRNewswire/ -- Numismatic Guaranty Corporation® (NGC®) has certified the most famous of all mint errors: the Don Lutes, Jr. Philadelphia 1943 Bronze Cent. This legendary coin was the first discovery of a 1943 bronze cent, which is considered by many to be the King of Mint Errors.

The Lutes specimen is now graded NGC AU 53 BN and will be on display at the ANA World's Fair of Money in Philadelphia, August 14-17, 2018. 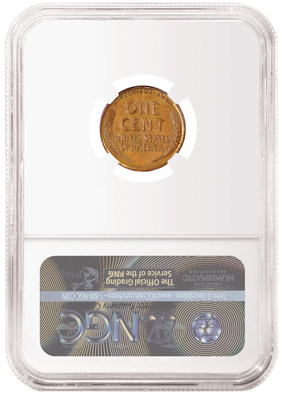 All 1943 cents were supposed to have been struck on zinc-coated steel planchets to save precious copper for more critical wartime production needs. In prior years, cents were struck on planchets made of bronze (95% copper and 5% zinc).

Before long, rumors circulated that Ford Motor Company would offer a new car in exchange for a copper penny dated 1943. This bit of whimsy had an unanticipated effect: in 1947, a newspaper reported that someone had indeed found a 1943 cent coined in bronze: 16-year-old Donald Lutes, Jr. of Pittsfield, Massachusetts. Lutes, a coin collector himself, had found his example in change from the school cafeteria.

While the numismatic community debated the merits of the Lutes report, the placement of another 1943 bronze cent at the 1958 ANA convention auction (this one discovered by Marvin Beyer sometime after the Lutes discovery) received nationwide attention. The interest only increased after Beyer pulled his coin from the sale at the last minute, which resulted in a lawsuit.

This media attention prompted Lutes to seek confirmation of his coin's genuineness. He loaned it to prominent numismatic researcher and authenticator Walter Breen in 1959, and Breen declared unhesitatingly that the cent was real.

Over the years since 1947 the legend of Lutes' 1943 bronze cent has only grown. It was never offered for sale, and the numismatic community was not able to see this amazing specimen until recently. Now elderly and living in a nursing home, Lutes has finally decided to pass on his prized discovery coin to a new owner: the coin, now certified by NGC, will be sold by Heritage Auctions.

A lustrous and glossy brown, the Lutes Discovery Specimen is just faintly worn and is among the more attractive of the 17 Philadelphia 1943 bronze cents that have since been confirmed. The NGC certification label features the pedigree "Don Lutes, Jr. Discovery Specimen," preserving this coin's important place in numismatic history.

"Like so many other young coin collectors growing up in the 1970s, there was always the dream of finding a 1943 copper cent," said David J. Camire, NGC Grading Finalizer and a mint error expert. "This coin, for me, is certainly the 'Holy Grail' of mint errors. Rarely today does a discovery piece come to market, after all these years, still in the possession of the original owner. A 'dream coin' to many, soon someone will become only the second owner of this legendary rarity."

Heritage Auctions President Greg Rohan added: "NGC's expertise in error coins is well-known in the numismatic community. After conferring with the consignor, the decision was clear to submit the coin to NGC."

The Lutes Discovery Specimen will be on display at the NGC booth (#1417) at the ANA World's Fair of Money from August 14 until noon on August 16. It will then be displayed at the Heritage Auctions booth (#711) through August 17. Heritage will offer the coin in a future auction.

NGC is the world's largest and most trusted third-party grading service for coins, tokens and medals. Founded in 1987, NGC provides accurate, consistent and impartial assessments of authenticity and grade. To ensure impartiality, NGC does not buy or sell coins. Its full-time graders are prohibited from buying and selling coins commercially, and strict procedures are in place to prevent consultants from influencing the grades assigned to their own submissions.  Every coin that NGC certifies is backed by the comprehensive NGC Guarantee of authenticity and grade, which has added confidence and value for collectors and dealers around the world. Learn more at NGCcoin.com.

© 2018 Numismatic Guaranty Corporation of America. All rights reserved. NGC, NCS, PMG, CGC, CCS, ASG, CAG and CCG are the registered trademarks or unregistered trademarks of Numismatic Guaranty Corporation of America, and/or its related companies in the United States and/or other countries. All other names and marks referenced in this release are the trade names, trademarks, or service marks of their respective owners.