WARSAW, Poland, June 9, 2017 /PRNewswire/ -- In the Forum held by Rzeczpospolita and Parkiet, the most influential media in Poland, Nuctech Warsaw was awarded as the Most Dynamic and Innovative Small and Medium-sized Enterprises of Poland. The Forum was held in the conference hall of Warsaw Stock Exchange in Warsaw, Poland, the Vice Economic Secretary of Poland presented the Certificate of Honor to Bian Xiaohao the General Manager of Nuctech Warsaw. The Certificate read: Nuctech Warsaw Company Limited SP.Z O. O, the most dynamic company, the future of Polish economy. 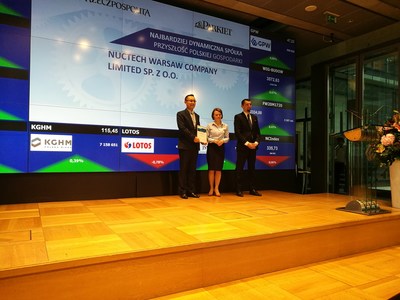 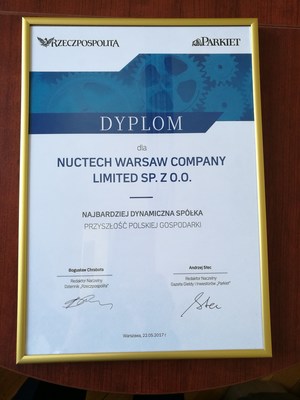 Conducted by Rzeczpospolita and Parkiet, 50 companies were first selected from 350 representative small and medium-sized enterprises in Poland. The top fifty were then graded in terms of revenues, profits, increased investments and other dimensions in last 3 years, and the top 10 were going to be the prize winners. Nuctech was the No.1. Bian Xiaohao the General Manager of Nuctech Warsaw said excitedly after the meeting that, "the honor is definitely a big surprise, which is not only a 'Yes' to Nuctech Warsaw, but also to Nuctech's years of overseas cultivation."

As the first overseas manufacture base of Nuctech, Nuctech Warsaw was founded in 2005, 90% of the company's staff are local Polish. Nuctech's products have played an important role in helping the Poland customs to combat smuggling, enhance clearance efficiency, and protect the security of homeland and people. So far, 7 Cargo/Vehicle Inspection Systems and 9 X-ray inspection systems have been installed in Poland, and the company has provided advanced ways of inspection to the customs, border defense, and aviation of Poland.

Ever since Nuctech Warsaw was founded, their security products have been sold to over 30 European countries including Sweden, Britain, Czech, German and etc.

Based in Europe, Nuctech Warsaw will continue to show its charm of "Designed in China, and Manufactured in Europe" as Nuctech's bridgehead in Europe.