LONG BEACH, Calif., Oct. 1, 2020 /PRNewswire/ -- Today, Obagi, the leading science-based, results-driven skincare brand, announced that Grace Strobel, Down Syndrome advocate, role model, model and speaker, is their newest SKINCLUSION Ambassador and the face of the new Obagi Clinical Kinetin+ Exfoliating Cleansing Gel. This news comes out as we enter the month of October which is Down Syndrome Awareness Month, and what better way to hero Grace's efforts than to announce this partnership and amplify Grace's platform. 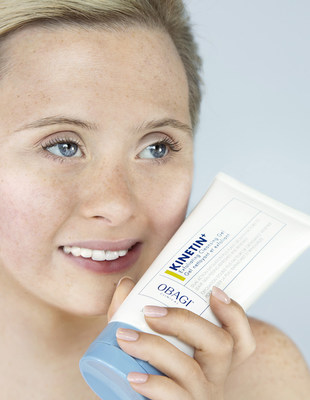 Obagi's SKINCLUSION initiative is designed to elevate the global dialogue about diversity and how we can all make conscious choices to see the beauty in all of our differences. SKINCLUSION represents everything Grace has been working on to help encourage inclusion, self-esteem and diversity. "This partnership means the world to me and I am so excited to be a SKINCLUSION Ambassador because I love what Obagi stands for. Diversity, Inclusion and Beauty," says Strobel. "I think people with disabilities sometimes feel invisible. I became a model and speaker to help people see the value in others. And that's what Obagi does - looks into our faces and our hearts and sees the beauty in all of us. To be fearless. To be strong. To stand up for others. And to feel beautiful in our own skin."

In 2017, after a severe bullying attack, Grace turned pain into purpose and co-created #TheGraceEffect, a presentation she gives to schools about overcoming obstacles, treating people with kindness and respect, and living with a disability. "At the onset of SKINCLUSION, Grace sent me a letter explaining how she felt underrepresented in the beauty and skincare industries and was encouraged by the work Obagi was doing around diversity and inclusion," said Jaime Castle, Obagi President and member of the CEO Action for Diversity & Inclusion, the largest CEO-driven business commitment to advance diversity and inclusion within the workplace. "After first speaking with Grace we knew we wanted to bring her into the Obagi family. With elegance, humor, ambition and determination, Grace is working to change society's view of people with disabilities. She believes that when faced with trials and adversity we learn to have courage and to be strong. We welcome and encourage Grace to use SKINCLUSION as a platform to amplify her message, to advocate for people with Down Syndrome, and to challenge our biases to become more inclusive."

Down Syndrome Awareness Month brings Grace and Obagi a chance to spread awareness and to celebrate everyone's abilities, not disabilities. "I am very proud that I have Down Syndrome and that I could turn pain into purpose and help others to believe in themselves," adds Strobel. "I think sometimes people are afraid of what they don't understand. We are consumers, our lives have meaning, and we want to be represented. Obagi's SKINCLUSION initiative is helping to show beauty in our differences and to not be afraid of those differences. Working with Obagi has been a dream come true because it gives me a voice. Through exposure, we can create change and break down barriers, fears and create understanding. It's about making people with disabilities feel valued and included. And Obagi is helping us to do that."

"Sometimes words aren't enough," adds Castle. "At the heart of it, the real issue was that Grace felt under-represented in the skin care industry. Together, we're remedying that. We're excited to announce Grace as the face of our new Obagi Clinical Kinetin+ Exfoliating Cleansing Gel. Grace's successes drive awareness and acceptance of all people and we're thrilled she's chosen Obagi to be her partner along her journey."

As part of the SKINCLUSION initiative, Obagi is supporting groups who work to expand diversity and inclusion efforts around the world.

ABOUT OBAGI Obagi is a female-led independent global skin care company dedicated to providing advanced, clinically proven skin care treatments for all skin types. With a 30-year legacy and commitment to diversity and inclusion in all aspects of its business – from its corporate culture to product development – Obagi has pioneered a number of skin care advances, including being the first skin care brand to design its clinical research covering all six skin types across the Fitzpatrick skin spectrum. Through an extensive network of distributors, partners and physician offices around the world, the company provides more than 100 Obagi Medical™ products to brighten, nourish, protect and enhance skin tone and texture. Obagi also offers dermatologist-tested, technologically advanced formulas through its Obagi Clinical™ line, which is accessible to consumers at ShopObagiClinical.com.

About Obagi Clinical Obagi Clinical is a dermatologist-tested skin care line designed to prevent or delay the early signs of skin aging by addressing lines and wrinkles, texture and brightness in order maintain healthy, youthful looking skin. The Obagi Clinical line stems from Obagi Cosmeceutical's 30-year legacy in physician-dispensed skincare through its Obagi Medical line. Obagi Clinical's science-based and results-driven skin care line is available on ShopObagiClinical.com, Amazon.com, Sephora.com and Lovelyskin.com. For more information on Obagi Clinical, connect with the brand on Instagram, Facebook, and Twitter.

The Obagi Clinical product formulations and associated logos and trademarks are property of Obagi Cosmeceuticals LLC and/or its affiliates.