LOS ANGELES, Sept. 12, 2018 /PRNewswire/ -- According to the National Institutes of Health, more than 65 percent of all humans are cow's milk intolerant. This urgent public health crisis impacts an estimated 30-50 million Americans and has been linked to serious health hazards including cancer, diabetes, obesity, and other chronic diseases. Despite the staggering statistics and research behind this hidden epidemic, most of the population remains unaware of the threats that cow's milk could be posing to their health. 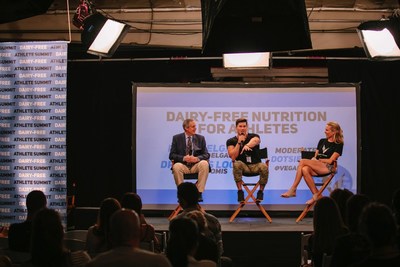 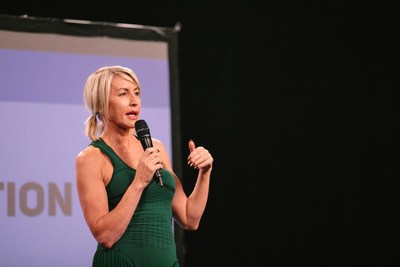 In a groundbreaking response to this crisis, Switch4Good - a coalition comprised of Olympic and professional athletes, supported by a team of health professionals and trainers - launched with a mission to educate the public on the dangers of dairy.

More than 80 of the Switch4Good doctors, scientists, and Olympic, professional, and amateur athletes joined forces at the first-ever Dairy-Free Athlete Summit in August to dispel the myth that dairy is a health food. The attendees discussed personal experiences, data, research, and health while planning strategic actions to educate the public about this hidden epidemic.

"Dairy is not health food. It is a marketing campaign and it is making people sick," says Switch4Good founder and Olympian Dotsie Bausch. "The industry's multi-million dollar ad campaigns are often misleading, and it is time we stand up and say no more to the dairy industry."

The Switch4Good coalition plans to actively hold the dairy industry accountable for its misleading health claims. In addition to the growing number of Olympic and professional athletes leading the movement, thousands of amateur athletes and dedicated influencers are participating in the campaign on their social media channels. Collectively, the coalition of athletes will use a combination of testimonials, social media campaigns, and public speaking appearances to share their personal experiences of improved health and performance after dropping all dairy products from their diet.

"I've never come across an athlete that drinks milk during a performance, or milk to start a performance. Dairy is a substance that I took away one day, and the next day I could just breathe better," says Malachi Davis, Olympic track & field runner. "When you are training for the Olympics, you have to use every single advantage possible."

The Research: Cow's Milk Doesn't Do A Body GoodResearch proves that drinking cow's milk increases mucus in a person's lungs, and many Switch4Good athletes can attest to the fact that eliminating cow's milk allowed them to begin to breathe much easier and better. Further, cow's milk can increase stress hormones, causing a person's body to store belly fat while simultaneously lowering muscle mass and bone density. Recent research proves that additional dangers of dairy consumption include increased risk of cancer, diabetes, osteoporosis, obesity, and heart disease.

Studies also show that people of color are exceptionally more at risk for allergies and intolerances to cow's milk. On average, 98% of Asian Americans, 90% of Native Americans, 75 to 80% of African Americans, 65% of Hispanics, and 83 to 100% of Ashkenazi Jews are lactose intolerant. While some European Americans have a lower rate of intolerance, the epidemic still affects a large portion of the population.

"For more than 50 years, scientific and medical journals have published research supporting a plant-based diet and exercise for chronic disease prevention. Yet, it's still being ignored, belittled, and opposed by government agencies and many in the medical community due to lack of exposure, limited nutrition education in medical schools, special interest groups and conflicts of interest," says Eric Sternlicht, Ph.D., Associate Professor of Health Sciences at Chapman University and President of Simply Fit, Inc. a nutrition and exercise consulting corporation in Orange, CA. "In addition to preventing disease, a whole foods, plant-based diet is optimal for athletic performance for many reasons."

S4G Response: Olympic Inspired LaunchWith this data and research in mind, the Switch4Good coalition of athletes joined forces with a mission to prove that eliminating dairy can improve health, increase athletic performance, and aid in faster recovery.

The early roots for the Switch4Good initiative began in February 2018, when its initial members teamed up to release a commercial. The PSA aired during the closing ceremonies of the 2018 Winter Olympic Games and featured six former Olympians, each detailing the health benefits they personally experienced after eliminating dairy from their diets. The Switch4Good commercial was a direct response to the dairy-sponsored "Milk Life" marketing campaign born from the industry's partnership with the United States Olympic Committee.

"We may not have access to big dairy's slick advertising agencies or lobbyists, but we have the power of our voices, and we felt now was the time to share our truth," says Rebecca Soni, six-time Olympic medalist and former world record-holder in swimming.

"As an athlete and a mom, I feel the need to share what I've learned and experienced firsthand about the dangers of dairy products," says Kara Lang, who represented Canada at two FIFA World Cups and Olympic games and played club soccer for the Vancouver Whitecaps.

After receiving an overwhelming response and extensive media coverage from their television campaign, the athletes decided to formalize and grow the coalition.

"I've heard from athletes around the world who are expressing interest and support," says Bausch. "We know what we are up against, but we're ready. Competition is in our blood."

About Switch4GoodSwitch4Good is a coalition-based nonprofit dedicated to telling the truth about the dangers of dairy. Backed by Olympic and professional athletes as well as doctors, researchers, allergists, nutritionists and trainers, Switch4Good's mission is to empower people to take control of their health and performance. The coalition's focus is on sharing personal stories and supporting the growing community of dairy-free athletes. For more information, please visit switch4good.org.