VANCOUVER, Oct. 23, 2018 /PRNewswire/ - Pacton Gold Inc. (TSXV: PAC, OTC: PACXF, FSE: 2NKN) (the "Company" or "Pacton") is pleased to announce that it has entered into a definitive agreement (the "Agreement") to acquire the conglomerate gold rights ("Gold Rights") of Calidus Resources Limited (ASX:CAI) in both the Marble Bar sub-basin, and the Northeast Pilbara sub-basin of Western Australia's Pilbara craton. (Figure 1).

Subject to TSX Venture Exchange acceptance, the conglomerate gold rights will be transferred to Pacton within 50 days. 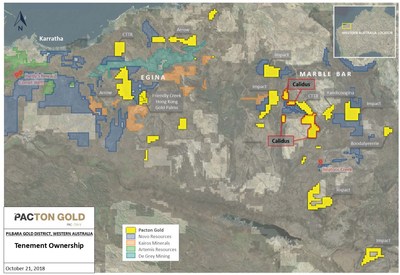 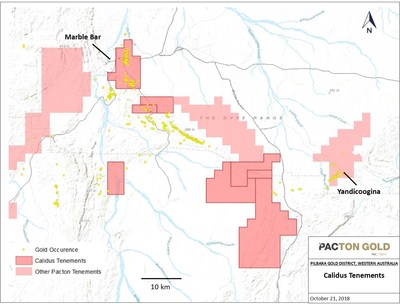 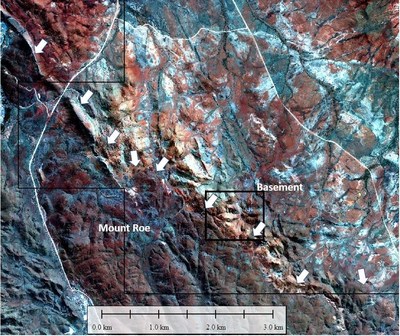 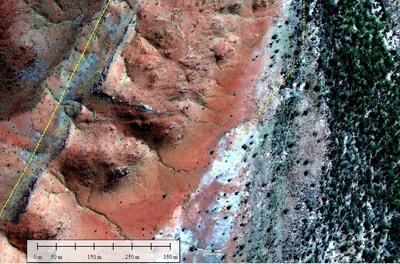 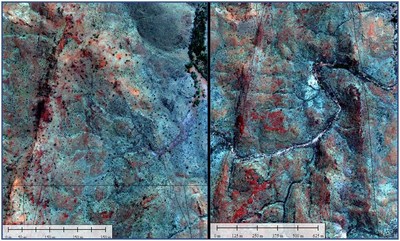 The acquisition of the Calidus conglomerate gold rights is strategically significant for Pacton, and is consistent with Pacton's directed strategy of acquiring Fortescue Group exploration conglomerate gold assets in parallel with its equally growing portfolio of Mesoarchean and Paleoarchean orogenic "mother lode" exploration projects.

Calidus is exploring for orogenic shear hosted gold deposits at its Warrawoona Gold Project south of Marble Bar in the Paleoarchean "basement rocks" of the Pilbara craton, which is excluded from the Agreement with Pacton (Figure 2).

Pacton's Agreement with Calidus allows it to explore and exploit any conglomerate or transported gold deposits in the sedimentary rocks overlying the basement rocks in the Calidus holdings, which are scattered from the town of Marble Bar to the Nulllalgine-Beaton Creek area. The Fortescue Group formation that overlies the basement rocks on the tenements covered by the Calidus Agreement are composed entirely of outcropping Mount Roe Basalt.

Pacton is currently conducting field exploration in the Mallina Basin, on its Egina area properties, located approximately 200 km west of the Marble Bar sub-basin. Field exploration will commence on the Calidus project immediately following the transference of the conglomerate rights to Pacton.

Three areas of the Calidus conglomerate gold right tenements have already been targeted for exploration. Two areas are located near the town of Marble Bar. The third area, an immediate priority, consists of a portion of a north-pointing, 10 km long "spear" of Mount Roe basalt, which is the northern extension of the Mount Roe formation that underlies the Novo Resources Corp (NVO:TSXV) conglomerates at Nulllagine and Beaton Creek, located approximately 20 km to the south. The Pacton portion of the "Spear", with a combined edge strike-length of about 15 km,  covers an area of 20 km2, approximately the same area as the Mount Roe surface exposure on Novo's Beaton Creek tenements. This is due to the fact that the Mount Roe Basalt surface footprint at Novo's Beaton Creek project is covered by the overlying Hardey formation conglomeratic members.

Conglomerate target planning will continue and field operations will commence immediately following the transference of the conglomerate gold rights from Calidus to Pacton.

Under the terms of the Agreement, the Company through its wholly-owned Australian subsidiary, will acquire the Gold Rights by issuing Calidus or its nominees 7,000,000 common shares. The Agreement includes a right to deferred compensation whereby Calidus may receive up to 3,000,000 additional common shares of Pacton on the first anniversary of completion of the transaction based on the 30-day VWAP of Pacton's shares on the date of such issuance.

The Company will be seeking TSX Venture Exchange acceptance of the transaction forthwith.

Pacton Gold (PAC: TSXV; PACXF: US) is a well-financed Canadian junior with key strategic partners focused on the exploration and development of conglomerate-hosted gold properties located in the district-scale Pilbara gold rush in Western Australia.

The technical content of this news release has been reviewed and approved Peter Caldbick, P.Geo., a director of the Company and a Qualified Person pursuant to National Instrument 43-101. The qualified person has not yet verified the data disclosed, including sampling, analytical, and test data underlying the information or opinions contained in the written disclosure.

On Behalf of the Board of Pacton Gold Inc.