MIAMI, Oct. 24, 2016 /PRNewswire/ -- Just before the start of Miami's Monday morning rush hour, the last few drops of cement flowed from the spicket at the site of Florida's historic "Big Pour," signaling completion of the concrete foundation for Paramount Miami Worldcenter. It is the 700-foot, 60-story, $500-million soaring signature residential skyscraper of Miami Worldcenter, America's second-largest urban development and the biggest building project in Florida history, which is "about to go vertical," according to its developers. 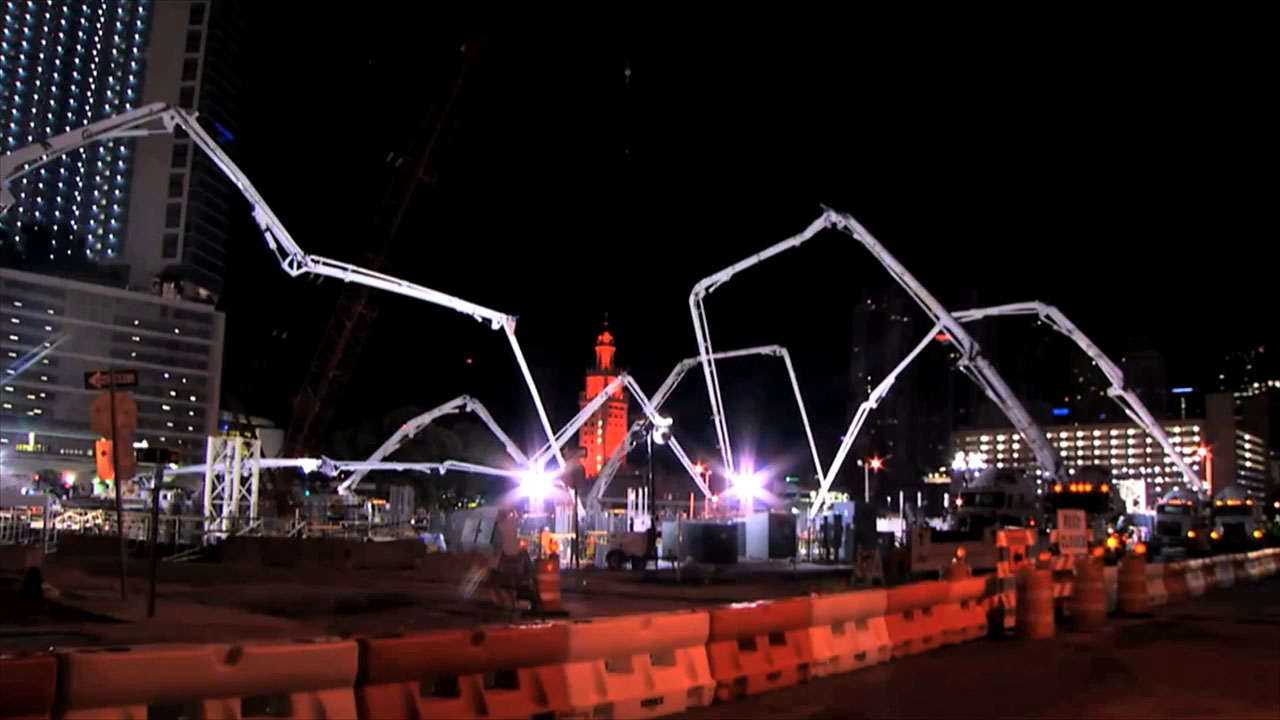 Paramount is the first phase of construction of Miami Worldcenter – the city's soon-to-be mega-retail, residential, restaurant, entertainment, hotel, convention center and transportation complex. It will be composed of multiple towers and a six block long urban core shopping and dining promenade.

Since 2:00 AM Saturday, a continuous convoy of 1300 concrete truck deliveries were made to the Paramount Miami Worldcenter construction site, according to Supermix, Inc. Throughout the weekend a brigade of more than 700 construction workers poured 52-million pounds of concrete into a massive 43,000 square feet, nine feet deep excavated hole -- one block west of Miami's American Airlines Arena, according to CoastalTishman Construction.

The concrete flowed from a half dozen boom pumps at a rate of 500 cubic yards per hour. Additionally, crews installed 4.8 million pounds of perimeter steel reinforcements.

America's City of the Future

The "Big Pour" comes 13 months after demolition crews cleared a 1.1 million square foot terrestrial landscape on the north side of downtown Miami, which was once riddled with decaying warehouses, but is now being transformed into a city-within-a city, according to Daniel Kodsi, Paramount Miami Worldcenter's developer-CEO.

"We are building America's City of the Future," explains Kodsi, a 25-year seasoned Florida developer. "Paramount is going to be a significant addition to Miami's skyline. When people come to Miami, whether they are coming from the airport; coming from the north or from the south, this is going to be the building they see in the center of the city. It's going to signify that you have arrived in downtown Miami."

Now that the foundation is in place, the hiring of more new construction workers will start, and, eventually, post-construction jobs will be available, according to Nitin Motwani, Managing Principal of Miami Worldcenter.

"We are going to put people to work. That's the bottom line," says Motwani, one of Miami's most influential visionary developers. "We have trained people ourselves with Miami-Dade College and Tramcon. We are hiring tens of thousands of people from the community; from the zip codes that most need it. If you're looking for a job, Miami Worldcenter is the place for you."

The building's 60th floor Skydeck will feature an astronomy observatory, lounges and a plunge pool oasis with a 360 degree view of Greater Miami, Miami Beach and Biscayne Bay.

Running through the heart of Miami Worldcenter is a six bock retail and restaurant promenade filled with an unprecedented collection of two and three story "High Street" style stores and outdoor and indoor dining rooms.

The promenade will intertwine with seven residential and office buildings, several hotels, including a 1700 room Marriott Marquis and a new convention center.

The Center will also serve as the intermodal hub for Miami's MetroMover and MetroRail elevated transit systems. Adjacent will be the main terminal for the Brightline high-speed intrastate railroad connecting Miami, Fort Lauderdale, West Palm Beach and Orlando. Service is expected to start in 2017.

"Downtown Miami real estate is considered amongst the most valuable and most stable investments in the world," says Kodsi. "The area is listed as the seventh most-active global investment destinations, according to CBRE."

Paramount Miami Worldcenter, which is expected to be completed in 2018, features 512 units with 10-foot ceilings, private elevators leading to the promenade and Skydeck. Most units have outdoor living room style terraces.