FORT WORTH, Texas, April 25, 2018 /PRNewswire/ -- Pecans have been hovering below the radar for most Americans – often dismissed as an ingredient just for holiday pies. Even though pecans are the only major tree nut indigenous to America, many people in the country are unaware of the versatility, health benefits, American heritage, and year-round availability of pecans. That's all about to change. 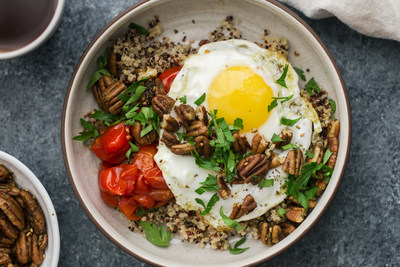 Today the pecan industry launched its first-ever national consumer campaign to help America's native nut proudly claim its spot as a super nutritious, super versatile and super local nut. American Pecans, The Original Supernut™ is a brand positioning for pecans and a consumer education initiative to get Americans to think about pecans in a new way.

"The American pecan industry has a rich history dating back centuries and a powerful story that is largely untold – our goal is to change that," said Mike Adams, a Texas pecan grower and chairperson of the American Pecan Council – a new organization formed as a result of a Federal Marketing Order (FMO) for pecans approved by the U.S. Department of Agriculture in 2016. "Other nuts, to their credit, have benefited from large consumer campaigns for decades. Now, we want to shine a light on our industry that has come together to share the story of the American Pecan."

Pecans, Humble No MoreThe new integrated marketing campaign includes digital advertising that showcases all the glorious ways to enjoy pecans that are #notjustpie, a national media integration along with media partnerships and influencer advocates to elevate the little-known health benefits of pecans. It also includes digital and social media, including a partnership with two of America's top digital platforms, Serious Eats and Simply Recipes, which will feature "shoppable" pecan recipes that make it easy to buy pecans via Amazon Fresh – marking a first for a commodity board.

The campaign will help change America's perception of pecans, focusing on three major reasons they truly are The Original Supernut.

The marketing campaign and brand positioning, developed by Weber Shandwick, was led by consumer research that guided the development of the campaign. The research revealed current attitudes and beliefs about pecans, demonstrating that the top-of-mind recall of pecans was significantly lower (15%) for pecans compared to other nuts.1 Many consumers did not even think of pecans as a "nut," but rather a baking ingredient. Pecans were most associated with pies, sweets and indulgent desserts, while other nuts were more likely to be linked to snacking and nutrition.

"Our objective is to broaden the appeal for pecans as more contemporary and preferred as an everyday snack or versatile cooking ingredient," Adams said. "We are elated by the positive consumer testing of our new brand and there's a real sense of optimism throughout the industry for what this campaign can do."

The U.S. annual pecan harvest averages about 300 million pounds, which is a large portion of the global pecan supply. However, pecan production is significantly lower than other major tree nuts that have benefited from Federal Marketing Orders for decades, such as 2 billion pounds for almonds and 1 billion for walnuts. Pecan growers have planted thousands of acres of new trees in the last few years in anticipation of the expected increase in demand.

Pecans: Not Just PieTo help illustrate the versatility of pecans beyond a pie, the campaign kicks off amidst National Pecan Month with a New York City pecan pop-up called "The Not Pie Shop" (110 Bedford Street) that will be serving a complete pecan menu (everything but pie) and will feature shelves full of innovative pecan products – from pecan milk, pecan butter and pecan oil to pecan snacks, flour and meal. Pecan cooking demonstrations will be conducted by superfood expert Dawn Jackson Blatner, RDN, New York chef Matt Abdoo, Lexi Davidson of 'Lexi's Clean Kitchen' and Erin Alderson of 'Naturally Ella.'

"I'm thrilled to help unveil one of the best-kept superfood secrets," said Blatner, registered dietitian and author of The Superfood Swap. "Pecans have been overlooked for years, so it's time to recognize pecans as a supernut. They're packed with valuable nutrients that we need every day, and there are so many different, delicious ways to enjoy them."

Pecans are a part of a $9 billion industry,2 and nut consumption in the U.S. has been steadily increasing, due to the strong evidence that nuts are heart-healthy* and provide plant protein and unsaturated fats. However, pecans have not enjoyed the same positive trajectory compared to other nuts.

"We are excited about deservingly earning a role on the national stage with our sister tree nuts. The health-conscious consumer is the real beneficiary of eating a natural food that is authentically local, powerfully nutritious, and truly delicious – the American Pecan," Adams said.

About the American Pecan Council

The American Pecan Council (APC) is a group of passionate pecan growers and shellers whose life work is dedicated to growing, harvesting and processing America's native nut. Founded in 2016 through a Federal Marketing Order, the APC's mission is to promote the many benefits of the American Pecan and help tell the story of this truly unique nut. With oversight by the USDA, APC aims to build consumer demand, develop markets and establish industry standards. APC is based in Fort Worth, Texas, and funded by pecan handlers in 15 pecan-producing states: Alabama, Arkansas, Arizona, California, Florida, Georgia, Kansas, Louisiana, Missouri, Mississippi, North Carolina, New Mexico, Oklahoma, South Carolina, and Texas. To learn more visit www.AmericanPecan.com

*Scientific evidence suggests but does not prove that eating 1.5 ounces per day of most nuts, such as pecans, as part of a diet low in saturated fat and cholesterol may reduce the risk of heart disease, according to the U.S. Food and Drug Administration. One serving of pecans (28g) contains 18g of unsaturated fat and only 2g of saturated fat.