IRVINE, Calif., Oct. 15, 2014 /PRNewswire/ -- When Rhonda Martin bought her first Pedego electric bike in 2012, she weighed 457 pounds. "Riding an electric bike was my first form of exercise," she said. "I could barely walk 150 steps at a time.  With my Pedego, I began a journey to a new shape and a new life."  To date, Martin has lost more than 270 pounds and has brought her fitness to a level she never dreamed of in the past.  In two-and-a-half years, Martin has gone from hardly being able to move to being an active, award-winning triathlete.

Today, Martin is an inspiration to more than 12,000 people via her blog and Facebook page titled "Living Instead of Existing." And though she can now ride her choice of pedal or electric bicycles, Martin still exercises a lot on her Pedego. In fact, she also uses it to commute 38 miles round-trip to work.

Electric bicycling helps people cycle their way to health and fitness. It's exercise that doesn't feel like exercise — it's fun!

Having an electric bicycle gets people motivated to get outside and pedal.  Even with the electric motor, people pedal most of the time and use the throttle to flatten hills and make headwinds a breeze.

Benefits of electric cycling include:

People who might not otherwise find the strength to cycle are climbing onto two wheels at an increasing pace. Pedego's powerful electric motors allow riders to customize their workout — and add a healthy dose of fun.

About Pedego Pedego® Electric Bikes, the world's premier electric bicycle brand, transforms people's lives with fun and an abundance of delightful moments. Pedego's stylish, colorful bikes boast the latest in electric bicycle technology and deliver a green alternative for transportation, exercise and recreation. Riders sail up hills and breeze through headwinds! Pedego "pedal or not" models include the Comfort Cruiser, City Commuter and Trail Tracker. Hailing from Orange County, Calif., Pedego is the fastest growing electric bicycle company in the world. Pedego electric bikes are sold in more than 800 stores in 40 countries. For more information, please visit http://www.pedegoelectricbikes.com/. 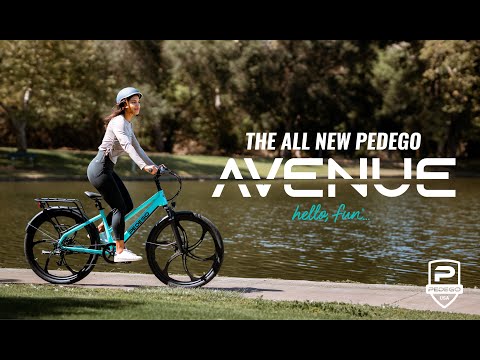