(All financial figures are approximate and in Canadian dollars unless otherwise noted.)

CALGARY, Dec. 16, 2013 /PRNewswire/ - Pembina Pipeline Corporation ("Pembina" or the "Company") (TSX: PPL; NYSE: PBA) announced today that it has reached binding commercial agreements to proceed with constructing approximately $2 billion in pipeline expansions (the "Phase III Expansion"). The Phase III Expansion is underpinned by long-term take-or-pay transportation services agreements with 30 customers in Pembina's operating areas and is expected to be in service between late 2016 and mid 2017, subject to environmental and regulatory approvals. The 540 kilometre ("km") Phase III Expansion will follow and expand upon certain segments of the Company's existing pipeline systems from Taylor, British Columbia southeast to Edmonton, Alberta to fulfill capacity needs for Pembina's customers, with priority being placed on areas where debottlenecking is essential.

The core of the Phase III Expansion will entail constructing a new 270 km 24 inch diameter pipeline from Fox Creek, Alberta, to the Edmonton area, which is expected to have an initial capacity of 320,000 barrels per day ("bpd") and an ultimate capacity of over 500,000 bpd with the addition of midpoint pump stations. Once complete, Pembina will have three distinct pipelines in the Fox Creek to Edmonton, Alberta corridor. With the Company's existing pipelines and current expansions, these three pipelines are expected to have the designed capacity to transport up to 885,000 bpd if fully expanded. The Phase III Expansion also contemplates increasing pipeline interconnectivity between Edmonton and Fort Saskatchewan including Pembina's Redwater and Heartland Hub sites as well as third-party delivery points in these areas. This interconnectivity will provide the option for customers to access a broad variety of delivery points including fractionators, refineries, and storage hubs and increased access to pipeline and rail take-away capacity.

"We initiated our previously announced Open Season in March to identify producers' pipeline capacity requirements beyond our expansions that are already underway," said Mick Dilger, Pembina's President and Chief Operating Officer. "The Phase III Expansion, which is the largest expansion of Pembina's systems in the Company's history, is the result of that process. The project provides customers an inclusive solution, as it will increase crude oil, condensate and NGL take-away capacity from northwestern Alberta and northeastern British Columbia to markets in the Edmonton and Fort Saskatchewan areas. When complete, it will also create operational efficiencies and improved customer service by reducing the need for us to batch products throughout our systems."

The contracts underpinning the Phase III Expansion are ten-year transportation services agreements for volumes that average over 230,000 bpd, or approximately 75 percent of the initial capacity, and that provide a steady, long-term EBITDA stream which is expected to be, on average, in the range of approximately $270 million to $300 million per year (see Non-GAAP measures below). The Company anticipates securing further pipeline transportation commitments over the next six to nine months while it refines the project scope. Any additional commitments made before the Company begins to order long-lead equipment would support increasing the design capacity of the Phase III Expansion.

The Phase III Expansion follows a series of growth projects on Pembina's conventional pipeline infrastructure resulting from the ongoing successful development by oil and gas producers of resources plays in the Montney, Duvernay and Deep Basin Cretaceous formations.

With the addition of the Phase III Expansion, Pembina's previously announced 2014 capital spending plan will increase from $1.5 billion to $1.7 billion. Pembina expects the majority of spending associated with this project will occur during the main construction periods from 2015 through 2016.

"This is a watershed event for Pembina," said Bob Michaleski, Chief Executive Officer. "We are about to embark on the largest expansion the Company has ever undertaken - a project which will form the foundation for our Company's growth for years to come. I have always maintained that if we could build our assets again, we would build them in the same location they are today, except we would build them larger. The Phase III Expansion supports this sentiment and demonstrates Pembina's continuing ability to leverage its existing asset footprint to satisfy customer needs and drive long-term shareholder value."

Pembina is committed to achieving excellence in every aspect of its business, from how it designs, constructs and operates its pipelines and facilities to how it interacts with community neighbours, customers and employees. For the Phase III Expansion, Pembina will consult with applicable regulatory authorities, First Nations, landowners and other stakeholders on the project plans. Activities related to obtaining regulatory approvals are underway and Pembina will commence First Nation consultation and its public involvement program for the Phase III Expansion in early 2014.

Calgary-based Pembina Pipeline Corporation is a leading transportation and midstream service provider that has been serving North America's energy industry for nearly 60 years. Pembina owns and operates: pipelines that transport conventional and synthetic crude oil, condensate and natural gas liquids produced in western Canada; oil sands, heavy oil and diluent pipelines; gas gathering and processing facilities; and, an oil and natural gas liquids infrastructure and logistics business. With facilities strategically located in western Canada and in natural gas liquids markets in eastern Canada and the U.S., Pembina also offers a full spectrum of midstream and marketing services that span across its operations. Pembina's integrated assets and commercial operations enable it to offer services needed by the energy sector along the hydrocarbon value chain.

Pembina is a trusted member of the communities in which it operates and is committed to generating value for its investors by running its businesses in a safe, environmentally responsible manner that is respectful of community stakeholders.

Non-GAAP Measures In this news release, Pembina has used the term EBITDA, meaning "Earnings before interest, taxes, depreciation and amortization". EBITDA does not have a standardized meaning prescribed by GAAP and is therefore unlikely to be comparable to similar measures presented by other companies. EBITDA is commonly used by management, investors and creditors in the calculation of ratios for assessing leverage and financial performance and is calculated as results from operating activities plus share of profit from equity accounted investees (before tax) plus depreciation and amortization (included in operations and general and administrative expense) and unrealized gains or losses on commodity-related derivative financial instruments.

Forward-Looking Statements & Information This document contains certain forward-looking statements and information (collectively, "forward-looking statements") within the meaning of the "safe harbor" provisions of applicable securities legislation that are based on Pembina's current expectations, estimates, projections and assumptions in light of its experience and its perception of historical trends. Forward-looking statements are typically identified by terminology such as "expects", "projects", "will", "anticipates", "would", "could", "potential" and similar expressions suggesting future events or future performance.

Various factors or assumptions are typically applied by Pembina in drawing conclusions or making the forecasts, projections, predictions or estimations set out in forward-looking statements based on information currently available to Pembina. These factors and assumptions include, but are not limited to: that counterparties will comply with contracts in a timely manner; that there are no unforeseen events preventing the performance of contracts or the completion of the Phase III Expansion; that Pembina will obtain required regulatory approvals on a timely basis; maintenance of operating margins; anticipated changes in interest rates, foreign currency exchange, inflation rates and commodity prices; ongoing utilization and future expansion, development, growth and performance of Pembina's business and asset base; future demand for transportation services; future levels of oil and natural gas development in proximity to Pembina's pipelines and other assets (which could be affected by, among other things, possible changes to applicable royalty and tax regimes); the amount of future liabilities related to environmental incidents; the availability of coverage under Pembina's insurance policies (including in respect of Pembina's business interruption insurance policy); future acquisitions, growth and growth potential in Pembina's operations; additional throughput potential on additional connections and other initiatives on the Conventional Pipelines systems; expected Phase III Expansion start-up and construction dates; future dividends and taxation of dividends; future financing capability and sources; and negative credit rating adjustments.

The actual results of Pembina could differ materially from those anticipated in these forward-looking statements as a result of material risk factors including, but not limited to: the regulatory environment and decisions, and the inability to obtain required regulatory approvals; the impact of competitive entities and pricing; reliance on key relationships and agreements; the strength and operations of the oil and natural gas production industry and related commodity prices; the continuation or completion of third- party projects; non-performance or default by counterparties to agreements which Pembina or one or more of its affiliates has entered into in respect of its business; actions by governmental or regulatory authorities including changes in tax laws and treatment, changes in royalty rates or increased environmental regulation; fluctuations in operating results; unexpected increases in capital costs for the Phase III expansion; adverse general economic and market conditions in Canada, North America and elsewhere, including changes in interest rates, foreign currency exchange rates, inflation rates and commodity prices; lower than anticipated results of operations and accretion from Pembina's business initiatives; and the ability of Pembina to raise sufficient capital (or to raise capital on favourable terms) to complete future projects and satisfy future commitments. 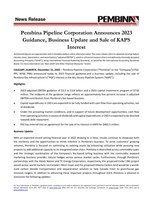