STAMFORD, Conn., Sept. 14, 2020 /PRNewswire/ -- Today, PERRIER® Carbonated Mineral Water, announces PERRIER x MURAKAMI, a new, vibrant collaboration with renowned artist Takashi Murakami, inspired by the pop and colorful universe of the artist and the creative and pioneering spirit of PERRIER®. In October 2020, premium Limited Edition PERRIER® screen-printed glass bottles featuring original artwork by Takashi Murakami will be launched around the world. In early 2021, the full PERRIER® Original range will be released in the colors and motifs of Murakami, and sold at retailers nationwide. 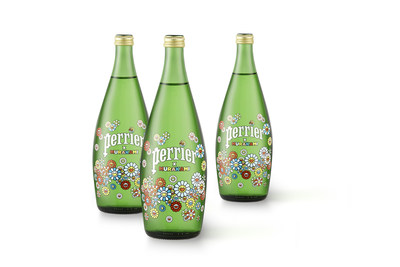 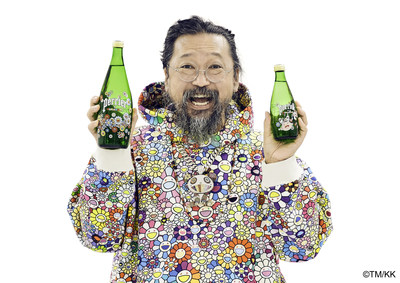 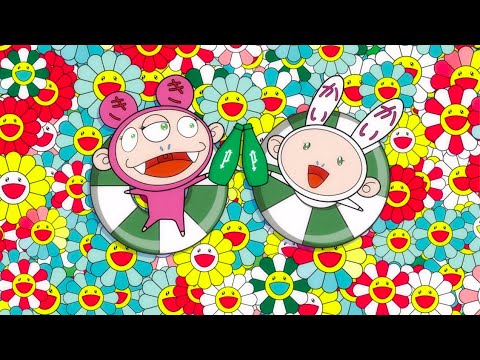 Murakami is the latest artist to have fun restyling the iconic and vibrant PERRIER® brand. The PERRIER x MURAKAMI collaboration continues the long-standing creative relationship between PERRIER® and great artists. Over its 150-year history, the brand has collaborated with some of the world's most influential artists, including Andy Warhol, Salvador Dalí, Bernard Villemot, Raymond Savignac, Carlu and Jean-Gabriel Domergue, all of whom created trailblazing posters and artworks for the brand.

Murakami's signature smiling flowers will bring an extra pop of color and joy to the iconic green PERRIER® bottles, in screen-printed glass formats. Some bottles will also feature Murakami's most beloved characters, Kaikai and Kiki, who will also appear alongside PERRIER® in a 30-second animated film, produced with Murakami. Additional product formats, including cans, will launch in early 2021.

Murakami is considered one of the most important Japanese artists of our generation, and even, Japan's superstar artist. Drawing from traditional Japanese paintings, sci-ﬁ, anime, and the global art market, Murakami creates paintings, sculptures and films populated by repeated motifs and mutating characters of his own creation. His wide-ranging work embodies an intersection of pop culture, history, and fine art, merging the commercial and fine art realms and flattening the distinction between high and low culture.

While he is most popularly associated with the smiling flower motif and bright, playful imagery, Murakami's wider body of work often engages with challenging, serious themes, communicated through a highly intricate and multi-layered pictorial language.

"Takashi Murakami is one of the most prominent contemporary living artists in the world. He has succeeded in creating art that is both accessible and deeply considered, with a flair for what is most fresh and most pertinent to the widest audience.

The vibrancy and delight of Murakami's work is the perfect match for PERRIER®, a brand that has invested for over a century in creativity to bring out a differentiating brand spirit, tinged with its unexpected, crazy and original personality. The brand has inspired and collaborated with some of the world's most famous and distinguished artists, such as Andy Warhol, Salvador Dalí, Raymond Savignac and Bernard Villemot, who have each in their own way established a touch of artistic irreverence, providing them a space of expression in the identity of PERRIER®.

We hope that this collaboration, inspired by the pop and colorful universe of Takashi Murakami and the creative spirit of PERRIER®, will increase the accessibility of art for an even broader global audience."

"When PERRIER® first approached me, I felt extremely lucky to have the opportunity to collaborate with this sparkling water brand with such a long history. It held many positive associations for me – for example, when I was 32 and started living in New York, I used to drink PERRIER® a lot. Even further back, though, I have another very strong memory: I was on the first romantic date of my life at age 18 with a girl two years my senior. We went to a place in Ginza and I ordered a bottle of PERRIER®, mistaking it for alcohol. I remember it all so clearly – especially how confused I felt when I didn't feel any alcohol effects after drinking many glasses!

PERRIER® for me is closely associated first with the color green – of course! – and then, with the pleasant bubbling sound of carbonation. I'm grateful to be part of the brand's expanding views and future-facing concepts through this collaboration.

I also wonder if today, when we can no longer unthinkingly hug, kiss, or shake hands, perhaps the stimulating sensation of the PERRIER® bubbles on our tongues will be even more heightened, as one of the enjoyable tactile experiences still available to us! I am delighted to be part of this collaboration with PERRIER® and I hope that together, we can heighten that sense of relationship further, sharing a little more joy and hope for the future."

From early October 2020, the premium limited-edition PERRIER x MURAKAMI bottles will be launched at global level.

About PERRIER®For over a century PERRIER® has collaborated with some of the world's most famous and distinguished artists, including Andy Warhol, Salvador Dalí and Bernard Villemot, who have each in their own way established a touch of artistic irreverence.

With a story that started in 1863, in Vergèze, South of France, PERRIER® Carbonated Mineral Water, is recognized worldwide by its iconic green bottle. Enjoyed in more than 140 countries worldwide, it is known for its refreshing mineral water combined with its unique bursting bubbles. For more information, visit www.Perrier.com and follow along on social at instagram.com/PerrierUSA.

About TAKASHI MURAKAMIBorn in 1962 (Tokyo).

Drawing from traditional Japanese painting, sci-fi, anime, and the global art market, Murakami creates paintings, sculptures, and films populated by repeated motifs and mutating characters of his own creation. His wide-ranging work embodies an intersection of pop culture, history, and fine art.

Murakami has held solo exhibitions at major art institutions around the globe and is widely known for his high-profile projects with fashion brands such as Louis Vuitton and VANS, as well as collaborations with musicians such as Kanye West and Pharrell Williams. He also directs and produces films and animation.

Murakami earned a BA, MFA, and PhD from Tokyo University of the Arts, where he studied nihonga (traditional Japanese painting). In 1996, he established the Hiropon Factory, a studio/workshop that in subsequent years grew into an art production and artist management company, now known as Kaikai Kiki Co. Ltd.

About PERROTIN gallery Takashi Murakami has been working with the contemporary art gallery Perrotin for 27 years. Takashi Murakami and Emmanuel Perrotin met each other in 1993 when the artist was taking part in the Yokohama art fair in Japan. In 1994, Emmanuel Perrotin exhibited a series of Murakami's paintings at the Gramercy International Art Fair in New York and in 1995, Perrotin Paris hosted his first monographic exhibition outside Japan. Since the beginning of their collaboration, Perrotin has hosted 13 solo exhibitions of Takashi Murakami across its six locations worldwide. Over the years, the gallery has also managed major institutional exhibitions of the artist with Château de Versailles, the Qatar Museums Authority, Mori Art Museum in Tokyo, Garage Museum of Contemporary Art in Moscow and Tai Kwun in Hong Kong, to name just a few.